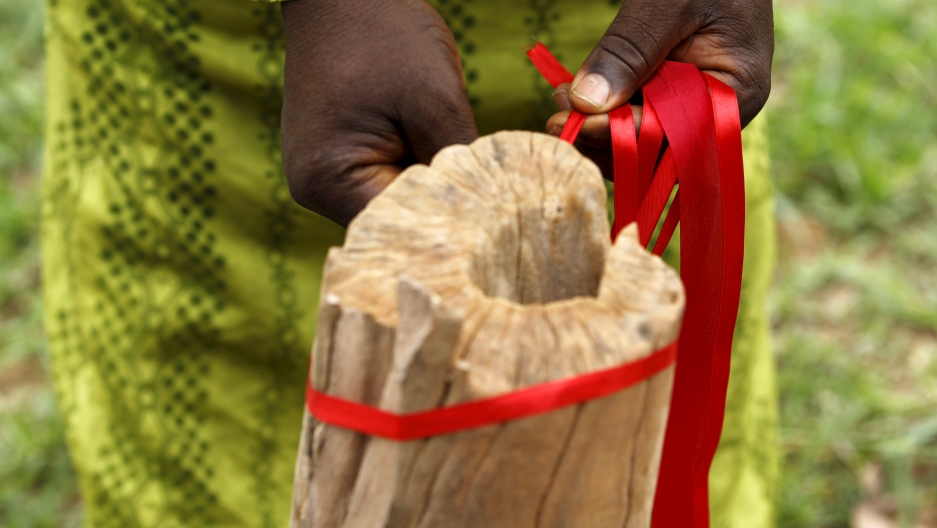 Red ribbons are tied around a tree trunk on the eve of the second anniversary of the abduction of the Chibok school girls in Abuja, Nigeria on April 13, 2016.

Two years after the Islamist group Boko Haram kidnapped 276 girls from a school in Chibok, Nigeria, the girls are still missing.

On Thursday, however, we got our first glimpse of a few of them in a new video — renewing hopes that not only are they missing, at least some are still alive.

Nigerian journalist Amma Ogan has been keeping a journalistic vigil for the kidnapped girls since they were abducted. She writes periodic columns updating readers on what is known and not known about the girls' whereabouts and the efforts to rescue them.

"I don't know that I'm any more involved in it than other people who have taken this up as a crusade," Ogan says. "But I'm somebody who's trying to urge people to keep on focusing on it and hoping that something will be done, something effective and conclusive."

Early efforts to find the girls and to keep their abduction in the public eye coalesced around the now famous #BringBackOurGirls social media campaign. Influential public figures, including Michelle Obama and Malala Yousafzai, signed on.

But all that international attention and all those tweets didn't amount to much. Neither did local protests in Nigeria demanding the government do more to find the girls. Within a few months, Ogan's column stopped mentioning the hashtag. She says that's the world we live in.

BBC Africa correspondent Nkem Ifejika says the operation to bring back the girls is still "up in the air" after all this time.

"No one is quite sure where the girls are," he says. "There hasn’t been any positive information about their whereabouts."

And then this: A video obtained by CNN and released on Thursday appears to show that some of the girls are still alive. In the "proof of life" video, 15 young women are lined up against a wall wearing headscarves and long robes. Some of the girls say their names. They seem to be the Chibok girls. At least two Chibok mothers told CNN they recognized their daughters.

The Nigerian government is trying to verify the authenticity of the video. Ifejika says the clip doesn't say much without that verification.

"If it was indeed taken in December 2015, that is a very strong indication that the girls are still alive," he says. "Although there have been suggestions that they’ve been married off and scattered across the region to Niger, Chad and Cameroon.”

Ogan's take is similar. The video raises many questions, but she and Ifejika do see a bit of hope in it.

Ifejika says at the very least the video could give hope to parents of the abductees.

"That’s all they’ve been able to latch onto for the past couple of years. They’ve got nothing else," he says. "Now, that hope shines brighter.”

The video also promises to bring renewed attention to the Chibok girls. Since their kidnapping, the girls have appeared in international news sporadically. Today, their story is back in the spotlight, even though it's not clear how long it will stay there. 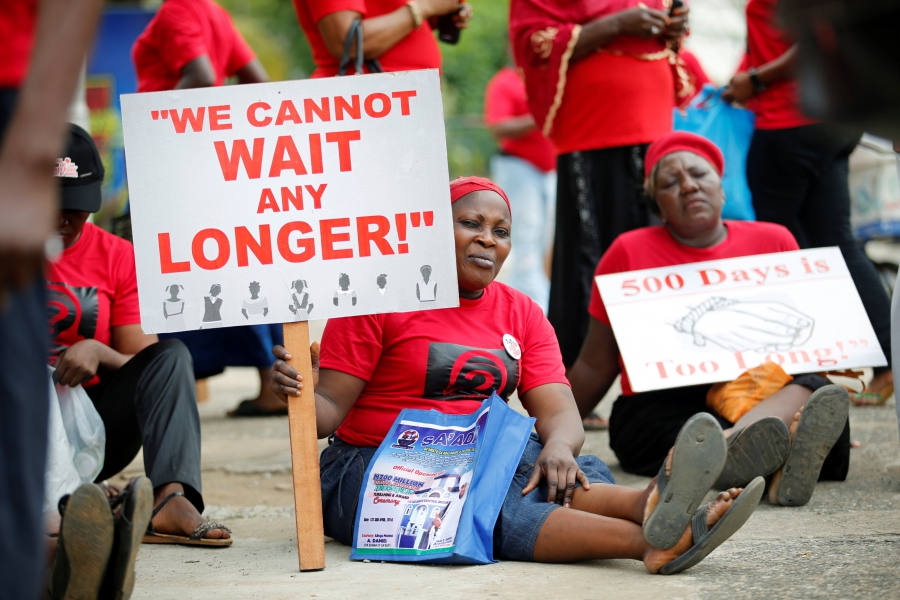 Women carrying placards attend a street protest campaigning for the rescue of abducted Chibok girls, in Lagos, Nigeria April 14, 2016, the second anniversary of their kidnapping by Boko Haram.
Credit:

"Everybody makes a lot of noise about it and then something else takes over," Ogan warns.

Still, she says the exposure has had value.

"It's important," she says, "but you can't expect it to be the most important issue on everybody's mind every day all the time."

Ogan also wants to remind people, as she does in her columns, that the Chibok abductions were not the first or the last of their kind. She says Boko Haram had been carrying out these sorts of kidnappings for almost two years prior to Chibok. And Amnesty International estimates that about 2,000 girls and boys have been kidnapped by Boko Haram since 2014.

The Nigerian military has rescued many kidnapped women and children from Boko Haram, just none of the Chibok girls.

As for Chibok girls' fates, Ogan and Ifejika say the general assumption is that they have been married off, enslaved, or even turned into suicide bombers.

Ogan says she will continue writing about the Chibok girls. She can't stop imagining what it must be like for their desperate parents.

"I'm a mother," she says, "I have two daughters. I don't know how you cannot place yourself in that position and think, 'How would I feel? What would I be doing if after two years I hadn't seen my daughter? I don't know what's happened to her."

A previous version of this story incorrectly attributed a quote to journalist Nkem Ifejika.