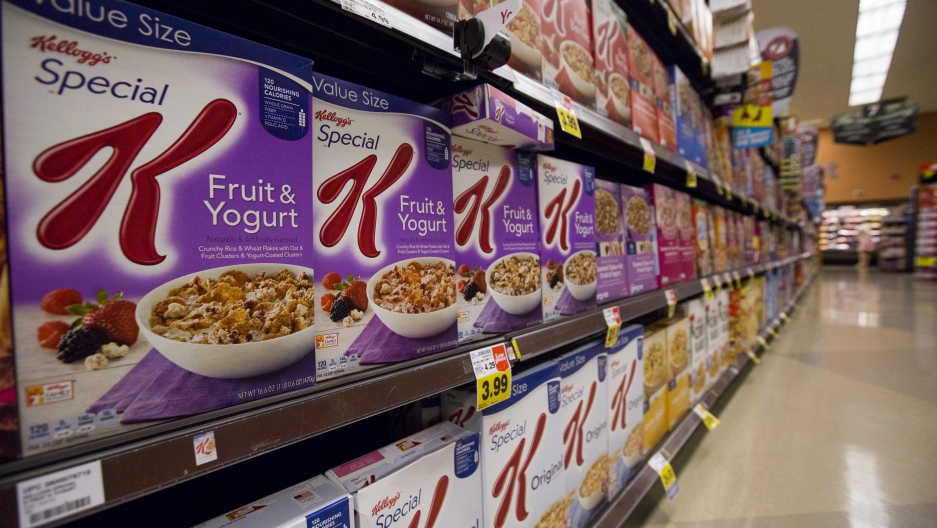 Various types of Kellogg's cereals are pictured at a Ralphs grocery store in Pasadena, California August 3, 2015.

In the next few months, you may see a new phrase on the labels of some foods at the grocery story: “produced with genetic engineering.”

These disclaimers have been mandated in dozens of countries for years, but until now they’ve been voluntary in the US.

The Vermont GMO labeling law was pushed through thanks, in large part, to grassroots activism by people like Will Allen.

Allen is the manager of Cedar Circle Farm in central Vermont, where he grows nearly 100 different types of organic vegetables and sells them at a farm stand and to local restaurants.

Allen hosts frequent seasonal events at the farm and wants it to be a meeting place for locals.

“Our goal has been to create a local production for local use organic farm that was a destination,” Allen said, “a valuable place to demonstrate how important a local farm was to the local community.” 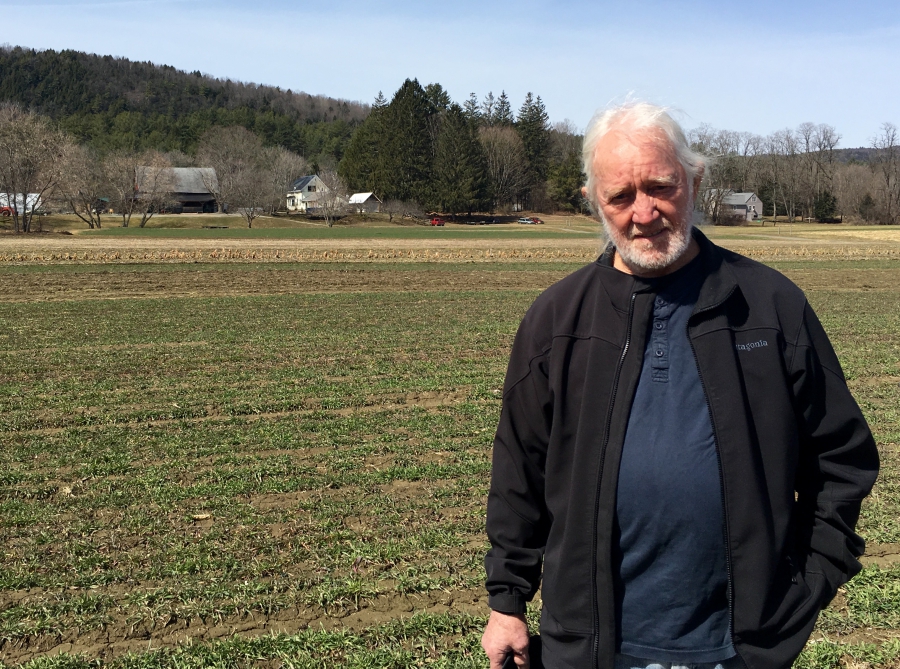 Will Allen at his organic farm in East Thetford, VT.

Allen has a white beard, and when I visited last week was wearing a Patagonia coat, reminding me a bit of a svelte, hippie version of Santa.

Allen doesn’t like genetically modified organisms, or GMOs, because they go against his vision of a local, organic food system.

One reason is that many GMO crops are designed to be either insect or herbicide-resistant. The herbicide-resistant varieties let farmers spray increasingly toxic and persistent chemicals on their fields. Allen worries that increases the amount of chemicals in our soil and food.

So, Allen worked with a coalition of activists and nonprofits to get a law passed in Vermont that would require foods containing GMOs to be labeled.

“We were able to get an average of 2,500 letters, phone calls and emails sent to each legislator in the house and senate,” Allen said. “That kind of message was powerful.”

The packed hearing at the statehouse in Montpelier and the influx of constituent correspondence ultimately won over even skeptical Vermont legislators, including Senator Bobby Starr.

“I never really did find anything wrong about GMOs,” Starr said, “but then as time went on, people starting asking, well why shouldn’t we have the right to know?”

Vermont prides itself as having a state government that’s of and for the people. To make citizens feel welcome in the state house, it doesn’t have a security checkpoint or metal detector. You can just walk right in.

So it’s a place where this kind of constituent sentiment really matters.

“It’s hard if you’re a state senator to deny the voice of people who continually call you on an issue like this,” said Senator Dick Sears.

The Vermont labeling bill was signed into law in 2014, and will go into effect on July 1 of this year.

Food companies have tried and failed, so far, to block the Vermont law. National legislation that would allow for voluntary GMO labels and would usurp state-based laws like Vermont’s has stalled in Congress. Democratic senators blocked the Senate version of the bill on a key procedural vote last month.

So in response to Vermont’s law, food companies like Campbell, Kellogg's, General Mills and Mars have all announced that they will label all their GM-containing products, whether they're destined for US shelves In Vermont, Maine, California or anywhere in between.

“We can’t label our products for only one state without significantly driving up costs for our consumers and we simply will not do that,” General Mills said in a post on its blog in March.

Other companies cite cost and the logistical difficulties of labeling food shipped to just one tiny state.

These new labels will be slapped on a huge variety of packaged food, because more than 90 percent of the corn and soy grown in the US is genetically engineered.

But food companies and others who support the development of genetically modified foods fear the labels will cause consumers to shun the products. And they have good reason to worry.

The European Union began requiring GMO labels more than a decade ago, a move that has essentially shoved GMO products out of the market, or prevented them from entering at all.

“There’s very little on offer in terms of products containing GMOs in Europe,” said Nathalie Moll, secretary general of the European biotech trade association EuropaBio. “The labeling law has meant that a lot of food companies have decided to source non-GMs.”

Moll argues that instead of increasing consumer choice, the labeling policy has actually decreased choice in the EU because it has forced goods off of store shelves.

The World Health Organization, American Medical Association and the American Association for the Advancement of Science all say there is no evidence that genetically engineered foods are unsafe to eat.

A Pew survey last year found 88 percent of scientists said genetically modified foods are generally safe. Some development experts go even further, arguing GMOs are vital to fighting global hunger and can even be good for the environment.

Back in the US, the Grocery Manufacturers Association is suing Vermont to stop the law from taking effect. They’ve asked a judge in a federal appeals court to issue an injunction that would block the law until the case winds its way through the courts. But for now, companies are hustling to comply with the July 1 deadline.

Vermont Attorney General William Sorrel, whose office will be charged with enforcing the law, said they have been flooded with questions about adherence.

“We sell bottled water, do we have to label that?” Sorrell said his office has been asked. “Do you have the necessary message in Spanish for us? We’re getting a lot of interesting questions.”

The law is complicated. It applies to any food that contains more than 0.9 percent genetically engineered ingredients, but doesn’t apply to meat, milk, eggs or any product overseen by the USDA.

“I’m proud of the fact that Vermont, this small state ... is leading the country,” Sorrell said.

States, he said, are the laboratories of democracy, even if it’s not yet clear where this particular experiment will lead.