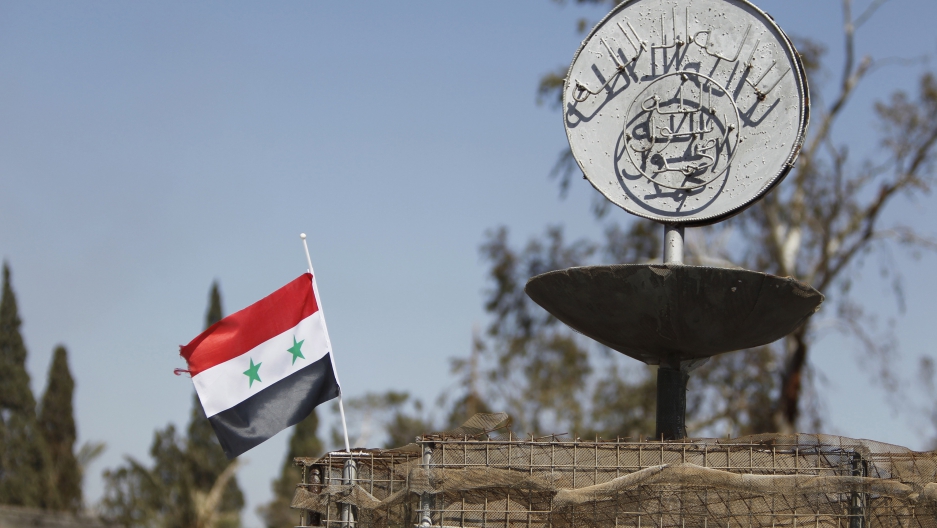 A Syrian national flag flutters next to the Islamic State's slogan at a roundabout where executions were carried out by ISIS militants in the city of Palmyra, in Homs Governorate, Syria April 1, 2016.

When Syrian teenager Omar ran away from his family, he had no idea what was in store for him. It all started last year, when he was 13, and ISIS came to his hometown of Ras Al Ayn near the Turkish border.

Omar says ISIS fighters seemed like real warriors who would give him a sense of pride and purpose.

“We spent one month training in this military camp — its name was the Sheikh Abu Musab al-Zarqawi camp, and our division was the Cubs of the Caliphate,” he says.

He says military training started at 7 a.m. and went until sundown. “Then from sundown to evening prayer, that’s when we go to Sharia lessons,” he recalls.

The military trainers were brutal, handling boys as young as 7 as if they were adult military recruits. Omar says there was no play time and punishment for breaking the rules was harsh.

Soon, he discovered an even more cruel reality. He and the other boys were being trained to carry out suicide attacks. He says he made friends with boys who later died that way.

“They called us buttons,” Omar says, referring to his ISIS trainers. Pushing a button would be the last thing the boys ever did.

So Omar decided to run away again — this time risking his life to escape from ISIS.

Omar is not the boy's real name, but his ordeal is typical of many Syrian ISIS defectors. He’s in hiding in Turkey, where he knows ISIS can still find him and kill him. He can’t go home, and he worries Turkish authorities will come after him in Turkey.

This is why it’s so difficult to get ISIS defectors to talk openly about their experiences.

And this is where Ahmet Yayla comes in. He was a chief of counter-terrorism in Turkey but now lives in the US. And he uses his contacts back home to interview ISIS defectors, like Omar in Turkey, via skype.

His partner on the research is Anne Speckhard, a psychologist and terrorism expert at Georgetown University. She worked on de-radicalization programs with the US government in Iraq. Speckhard estimates that, over the years, she’s interviewed hundreds of terror suspects from different backgrounds and religions, and she says that ISIS recruitment stands out for its brutality. For instance, the male recruits can only graduate from mandatory Sharia training if they prove their commitment to ISIS’s brand of violent extremism.

“There are prisoners brought for them to behead. We’ve been told this across the board. We had one ISIS defector who told us he had the knife in his hand and he was going to behead his prisoners then he realized this was a human being, and dropped and knife and ran away. But then he was arrested and recycled through the Sharia training,” Speckhard says.

Another defector, Um Mohammad, worked in ISIS’s vice unit, ensuring that women adhered to the strict Islamic dress code. She says many of the higher-ups in ISIS are foreigners — even in the women’s sphere. And they’re in charge of punishing Syrians whom they deem to be un-Islamic, which breeds resentment.

“We are all Muslims, but we still have to follow their rules,” Um Mohammad says, “like when Syrian women go out to farm the land, ISIS forbids them... and demands they wear a full niqab while farming, which is very difficult. But there’s no choice.”

She and her husband joined ISIS in Raqqa, the group’s de facto capital in Syria. At first, she says, they believed that ISIS would bring order and justice, but then they grew disillusioned. They stuck it out, though, because of the perks. ISIS gave them a house and regular salaries. She says she earned the equivalent of about $150 a month.

“We lived better than Syrians who didn’t join ISIS,” she says. “We ate roasted chicken and lamb.”

That’s a common story for Syrians under ISIS rule, according to Yayla, because ISIS controls the economy, including the distribution of housing, food and fuel.

When her husband was killed in the fighting, Um Mohammad says she knew ISIS would pressure her to marry one of their fighters. So she fled across the border to Turkey with her siblings and parents, where they are all in hiding.

As for Omar, the former child soldier who didn’t want to become a suicide bomber, he survives by picking cotton in Turkey. During his Skype interview, he cries and says he’s homesick.

Asked what he would tell other young men who are thinking of joining?