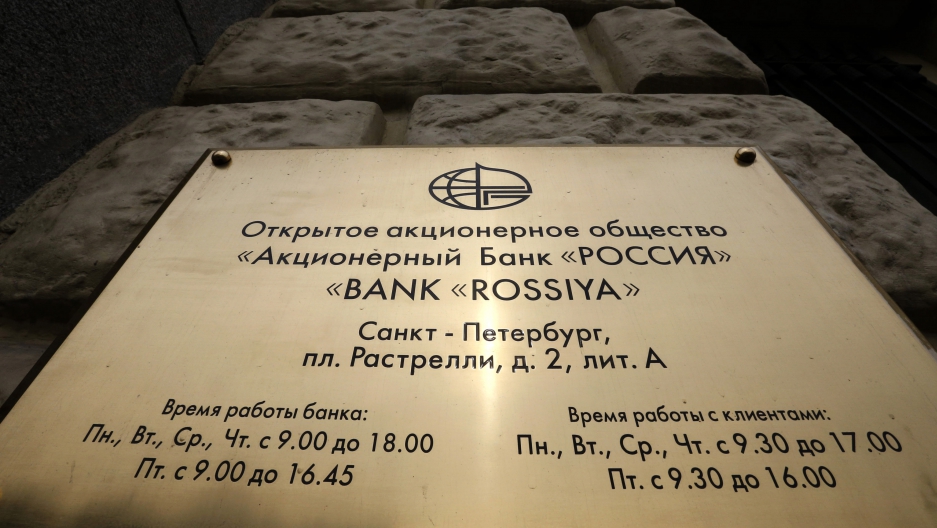 The address plaque of Bank Rossiya outside the bank's head office in St. Petersburg.

Russians feature prominently in the "Panama Papers" — the massive set of documents belonging to a Panamanian-registered law firm that have been leaked, exposing the seamy underbelly of offshore tax havens.

Many of the documents involve Russians.

None of the papers examined so far connect directly to Russian President Vladimir Putin. But plenty of his friends seem to be there.

These friends include a famous cellist — Sergey Roldugin. He apparently controls multiple companies worth billions of dollars, in offshore tax havens. He was a buddy of Putin’s during rough and tumble days in Leningrad (now St. Petersburg) before Putin joined the KGB.

“He’s one of Putin’s oldest friends,” says Drew Sullivan, editor and co-founder of the Organized Crime and Corruption Reporting Project. That's one of the news organizations that's been examining the "Panama papers" for the past year.

Roldugin does not live the lifestyle of wealthy oligarch. He told the New York Times in 2014 he did not have millions; just an apartment, a car and a dacha.

When confronted by reporters, Roldugin seemed "foggy" about the businesses he owns, according to Sullivan. “The suspicion of course is that he has no idea what’s going on’” says Sullivan. “They’re just using his name and he signs documents.”

Most of the work is done by employees of Rossiya Bank — a bank that Sullivan says is known in Russia as the "Bank of Putin’s Friends."

“I won’t say I’m surprised by what’s happening,” adds Sullivan. “We estimate that Putin is worth probably about $200 billion, that he’s taken from the Russian economy over the years. And we knew that this was happening.

"We’re very familiar with these types of techniques; they’re used all over eastern Europe and the former CIS [Soviet] states. So that’s not surprising. What’s surprising is to actually get all the documents; all the evidence. And how really blatant and audacious this was.”

“Putin will never have any documents with his name on it. He’s just too smart of a guy. He’s a world leader. He knows he can’t do that.  So he most likely uses people like Sergey to hold his assets for him, or basically to be his proxy.”

The Kremlin said the documents contained "nothing concrete, and nothing new," and nothing to implicate Putin.

Sullivan was surprised to hear that.

“I mean, to have documents that prove that at the very least there’s kind of a money laundering going on — that would be the minimal crime here. To say that this is not new is pretty surprising. I think when you’ve been caught with your pants down in such a blatant manner, I don’t think there’s a whole lot you can really say on this. The documents prove the story.”

Putin's spokesman, Dmitry Peskov, dismissed the reports, saying they aimed to discredit him ahead of upcoming elections.

"This Putinophobia abroad has reached such a point that it is in fact taboo to say something good about Russia, or about any actions by Russia or any Russian achievements. But it's a must to say bad things, a lot of bad things, and when there's nothing to say, it must be concocted. This is evident to us."