Chiac emerged naturally from close contact between French and English speakers that goes all the way back to the colonial period. Chiac speakers with the common last names, Leblanc and Daigle, descend from the early French settlers who have preserved their culture against formidable odds. In the deportation of 1755, the British evicted 10,000 Acadians, many of whom later returned to a world now dominated by English.

Their descendants speak Chiac, but ideally not too much of it — the boundaries are subtle, informed by fears about the erosion of French culture.

While activists and politicians have fought to carve out space for French in New Brunswick, artists and musicians have led an evolving conversation about where Chiac fits in a regional identity.

For Dano Leblanc, the Acadian band “1755” made him aware in high school that he used a vocabulary he wouldn’t hear on French television.

“They had lyrics that were in Chiac and, you know, suddenly it was written down, you know, in the lyric sheet and the album and you could see it and suddenly became really self-conscious of the way we spoke.”

As an adult, he put Chiac on television, spoken by the animated superhero Acadieman.

The show aired not just in New Brunswick, but elsewhere in Canada.

Chiac has in fact never been higher-profile than today, with Chiac musicians Lisa LeBlanc and Radio Radio touring France and Quebec.

“We get from other provinces [that] you're destroying your French,” says Marie Annick-Bisson, who knows LeBlanc and has followed her growing success. “It's like, well, if we can manage to speak a good French to other people who actually speak French and we speak Chiac amongst ourselves, then what's the problem?”

In this episode, we pose that question to the region’s best-known writer, France Daigle, to members of the hip-hop act Radio Radio, to politicians and to parents.

00:30 A spin of the radio dial in Moncton, New Brunswick.

1:00 Canada is chock-full of language policies, at provincial, territory and city level. 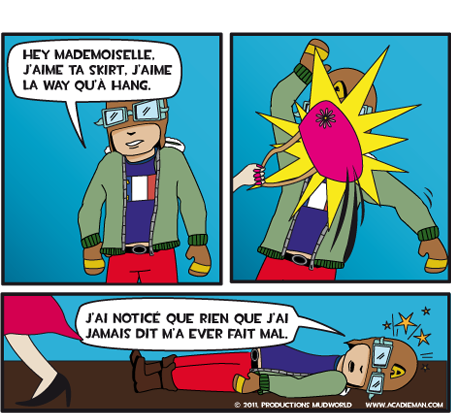 5:20 Should a public-service movie about teenage bullying in Moncton include dialogue in Chiac?

9:00 Some Acadian history: why Moncton sits on a linguistic border.

17:00 Singer Caroline Savoie wonders why she was subtitled by French TV.

19:35 Novelist France Daigle uses formal French in her narration but her character often speak in Chiac.

23:13 Politician Bernard Richard: "We have a saying: 'We learn French but we catch English.'"

Here's a different version of the story that aired on The World radio show...