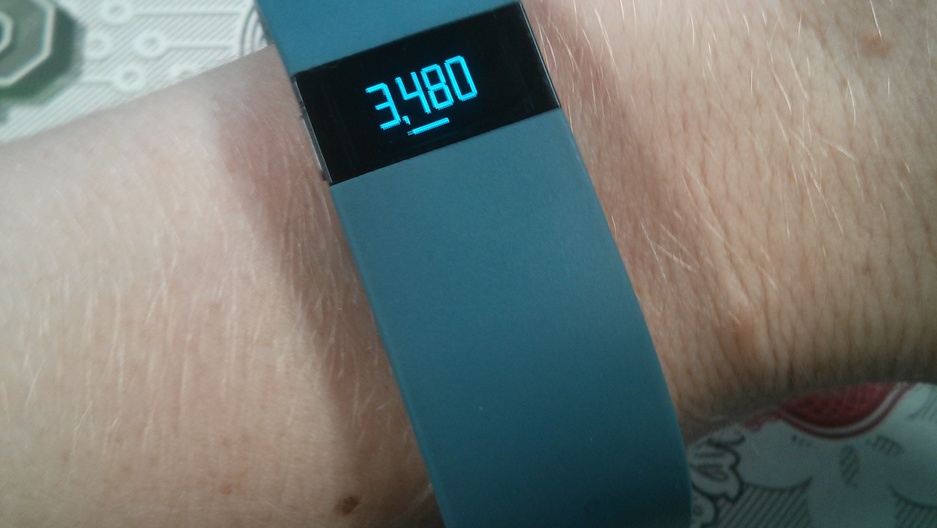 Wearable fitness trackers are all the rage. Far more sophisticated than mere step counters of old, these high-tech devices (Fitbits are one of the more popular brands) are worn on your wrist and measure steps taken, flights of stairs climbed, calories burned, hours slept, heart rate and more, with the goal of tracking a person’s overall activity and health.

But for David and Ivonne Trinidad, a couple in New York City, this personal health data was able to track something else, too: pregnancy.

“The first thing she thought was maybe something was wrong with the sensor on the watch,” David says.

He took to the online forum Reddit with the problem, hoping to crowdsource a solution.

“I was honestly hoping to avoid having to replace it,” David admits. “I was hoping that I could troubleshoot the problem on my own and fix whatever was going on with her watch.”

One user asked if his wife could be pregnant.

“That was when I realized that could be a possibility,” Trinidad says, noting that the couple had recently started trying to have their first child. “I called my wife, and I said, ‘Hey, a woman on Reddit thinks you might be pregnant.’ She laughed and said, ‘Wow.’ I said, ‘Well, yeah. You better go get some tests on the way home just to see.’ "

Lo and behold, the tests all came back positive. Ivonne was only four weeks into the pregnancy at that point. Elevated heart rate, as a result of higher body temperatures, is a common sign of pregnancy, but not one that a woman would be aware of without a heart rate monitor or fitness tracker like a Fitbit. The Trinidads were trying to use the fitness trackers data to make healthier lifestyle choices; they didn’t count on it alerting them to one of the biggest lifestyle changes they would ever make.

David Trinidad, a 34-year-old sales manager in New York City, never thought his wife's Fitbit would be able to detect that she was pregnant.

For the couple, this story about the unintended consequences of data collection has a happy ending. But as UC Berkeley professor Deirdre Mulligan points out, that might not always be the case. For example, she says, “I may be disclosing information that seems very innocuous to me but ... intelligence agencies, companies, friends and family, my colleagues, if they're using different sorts of machine learning techniques, they may be able to discover things about me that I really didn't chose to reveal.”

According to a Mother Jones report, Stephna May, a Fitbit spokesperson, says that the company "does not sell information collected from the device that can identify individual users, period." But the article also highlights a portion of Fitbit's privacy policy that says the company "may make certain personal information available to strategic partners that work with Fitbit to provide service to you." And some privacy advocates worry that existing policies might not prevent companies from sharing users' data if they chose to do so.

But for David, at least, this worry isn't of primary concern.

“I don't mind sharing my data,” he said. “Yeah, it's a little scary to think about it from that perspective at times, but I think anytime you can have data, and it helps you drive decision-making, whether it's personal or for business, I think that's always a good thing."

And as for the Fitbits?

“We're still using [them],” he said. “It's good to have the data. It's fun to look at the data, and help us hopefully make some healthier choices. That's the goal. That's the reason why we got it.”