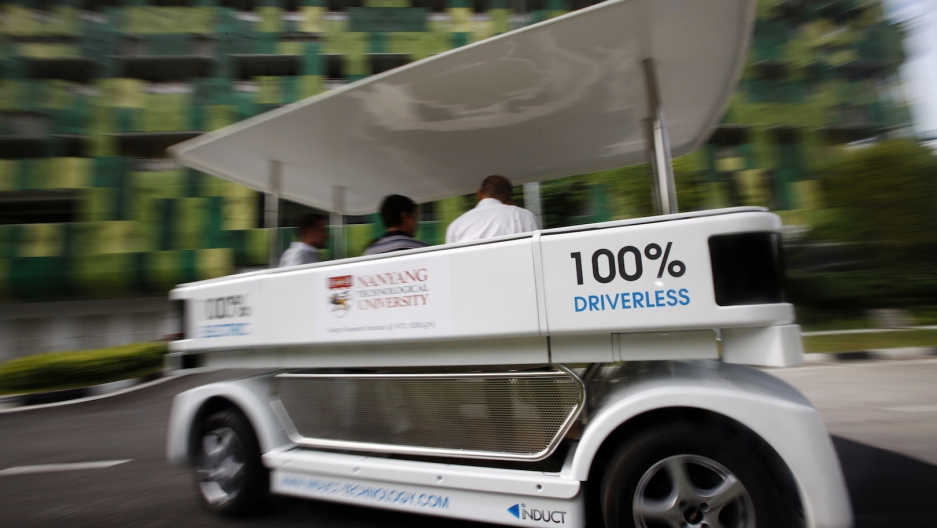 People ride on a driverless electric vehicle at the Nanyang Technological University (NTU) in Singapore, Sept. 4, 2013. The shuttle vehicle named Navia makes use of laser rangefinders, cameras and a navigation software that allows it to move autonomously.
Credit:

It’s a tiny, flat, wealthy island where the locals adore technology. It’s also ruled by authoritarian technocrats who can push through daunting proposals with ease.

There are few places in the world better poised to embrace driverless cars than Singapore — and in the race to roll out autonomous vehicles commercially, the Southeast Asian city-state may even beat the United States.

Few still ask whether self-driving vehicles will transform our lives in coming years. The question these days is when.

Seven major companies, including Nissan and Cadillac, claim they’ll have driverless cars ready for the market by 2020. By 2030, according to a National League of Cities study, driverless cars will be “ubiquitous with everyday life.”

Silicon Valley is the world’s top research hub for autonomous cars. That’s owed in large part to Google, which has logged more than a million robot-vehicle miles on American roads. But that doesn’t mean California will see everyday commuters in driverless cars any time soon.

Instead, Singapore — a tropical nation that’s a bit smaller than New York City — appears primed to tap America’s technological gains and press ahead first. The government is even courting US scientists with research funding and promises of friendly regulation.

The company is a spinoff from the Massachusetts Institute of Technology. It’s headed by Karl Iagnemma, a top MIT roboticist who publishes fiction about romantically tortured scientists on the side. He and his team chose to locate offices in Singapore, Parker says, because they’re convinced it will be “the first country that will adopt autonomous cars at scale.”

They hope to offer robot cars to Singapore’s public in the next 12 to 24 months. And if they succeed, they could effectively become the planet’s first commercially available purveyor of driverless vehicles.

“Singapore is an economic powerhouse but it’s also a smaller nation,” Parker says. “They can move quickly. They can institute things that, at a federal level in the United States, would be very difficult.”

Those things include quickly legalizing driverless vehicles and incorporating them into public transport. Initially, Parker says, the island would see driverless shuttles taking commuters to train stops from outlying neighborhoods where taxis seldom venture. (Their ultimate goal: running a robot taxi service that, like Uber, can be summoned by smart phone.)

Compare that to the adverse conditions in California, seen as the heartland of automated car research.

Google says it’s “gravely disappointed” with these plans and accuses California authorities of “writing a ceiling on the potential for fully self-driving cars.”

Meanwhile, Singapore’s government is throwing millions at automated vehicle startups to prod them along. “We’ve got strong political support … and even favorable geography. There are no earthquakes here,” Parker says. The roads are flat as well as “incredibly well maintained and present fewer challenges than, say, a hilly slope in San Francisco.”

So far, nuTonomy is working with a modded-out Mitsubishi i-MiEV. It’s an egg-shaped electric car and, yes, it has a steering wheel.

Singapore is hardly the sole nation gearing up for the driverless car boom. A Japanese firm has started ferrying residents of a small town back and forth to a shopping mall in automated taxis; Germany plans to amend its laws to prepare for the coming revolution.

But given Singapore’s tiny size and enthusiastic officials, the city-state could get the jump on other nations and act as the world’s robot car guinea pig.

Singapore’s rigid government — known to be cagey even about banal matters — hasn’t revealed how much has been spent toward advancing driverless car research. Speaking to local media, Singapore’s transport czar would only say “quite a fair bit” has been invested. Parker says the nation has supported research led by nuTonomy’s founders with “millions of dollars,” through a research wing co-managed by MIT and the government.

Singapore’s officials are certainly confident. They have brashly predicted that they’ll outpace the rest of the world putting everyday commuters in robot cars.

“I’m quite confident that Singapore will be the first city to implement this new technology,” said Lee Shiang Long, director of the nation’s top government research wing A*STAR, in an interview with local outlet The Straits Times. “This is because unlike trials in other countries, which are left pretty much to the private sector, the government is behind the efforts here.”