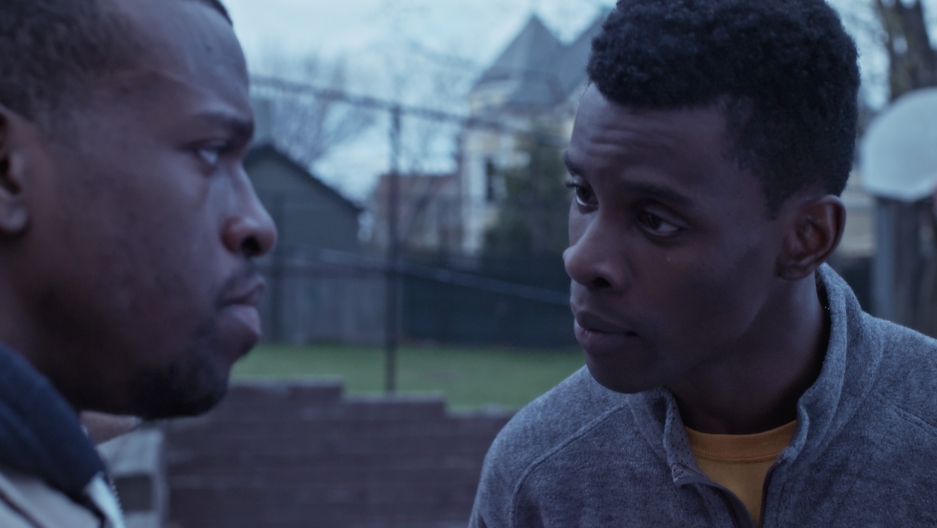 The Boston marathon bombings were terrifying for everyone in the vicinity. But for the high school friends of perpetrator Dzhokhar "Jahar" Tsarnaev, the aftermath of the attacks had its own special kind of horror and alienation.

Now two of those friends, Henry Hayes, and Zolan Kanno-Youngs, have made a short film, "Jahar," about what that experience was like. It's not a documentary, but rather a short feature, "based on actual events."

"I think catharsis was probably first and foremost in both of our minds," says Hayes, who directed the film and co-wrote the script with Kanno-Youngs. "I think I speak for most people that were in our situation, living in Cambridge and knowing Jahar, that it was incredibly isolating and terrifying to have this happen. It's very hard for a 19-year-old to deal with."

Hayes was in film school at the time, so he tried to write a script about the experience. It didn't work.

But a year later, Kanno-Youngs, whom Hayes had known since middle school, suggested they try to write something together. Kanno-Youngs traveled to New York and, within two days, they had written the script that became the film.

One thing they're both clear about is that the Tsarnaev they knew was not an outsider.

"It's easy to label someone that did something this horrible, 'an outsider, an antisocial, a sociopath, he was a loner, he had no friends in high school,'" Kanno-Youngs says.

"Not the case with him. This was a social, social guy. Laid back, at times maybe shy, but at the end of the day he was somebody that was always willing to go hang out with people and just have a good time. It's hard for people to fathom and we get that, but that's the person we knew."

In the opening scene, the protaganist, Jackson, wakes up in his dorm room at college to find his roommates around the TV watching the breaking news bulletins on the morning of April 19, 2013. The identities of the suspects had been released the night before, resulting in a car chase and police shootout and the death of Tsarnaev's older brother Tamerlan. Dzhokhar is on the run. One of the college kids mispronounces the younger Tsarnaev's name. After a stunned silence when Jackson is taking in the news and recognizing his high school buddy's name, you hear him say, "It's Jahar."

The film makes a big deal of how hard it is to say and spell Tsarnaev's name. But not for his friends. They knew him simply as "Jahar."

"I think in the context of the film, the name is really important and the spelling is really important," says Hayes. "Because it's a question of knowing someone. The Americanization of a name, spelling your name a certain way just so it's easier for your friends, is I think really telling and it's at the heart of what the film is."

For Kanno-Youngs, the difference in the spellings and pronunciations represents the separation between people from Cambridge who knew Tsarnaev and the people at college who weren't from Cambridge, who didn't know Tsarnaev.

"I don't remember Dzhokhar, the person that set off the bomb on the marathon," he says. "I'm trying to deal with the fact that this is Jahar, the guy that was making jokes in the halls of Cambridge Rindge and Latin (School)."

The 12-minute movie premieres at the Tribeca Film Festival on April 16. Not many people have seen it yet. Hayes says he's nervous but excited to share it.

"That scares me because that's not the intention of the film, at all. We don't want to minimize the horror of what happened at the Boston marathon. We were Bostonians too and that affected us. But I think that my counter is this film is important because it's just another, smaller part of the pain. It's just another piece of the tragedy."