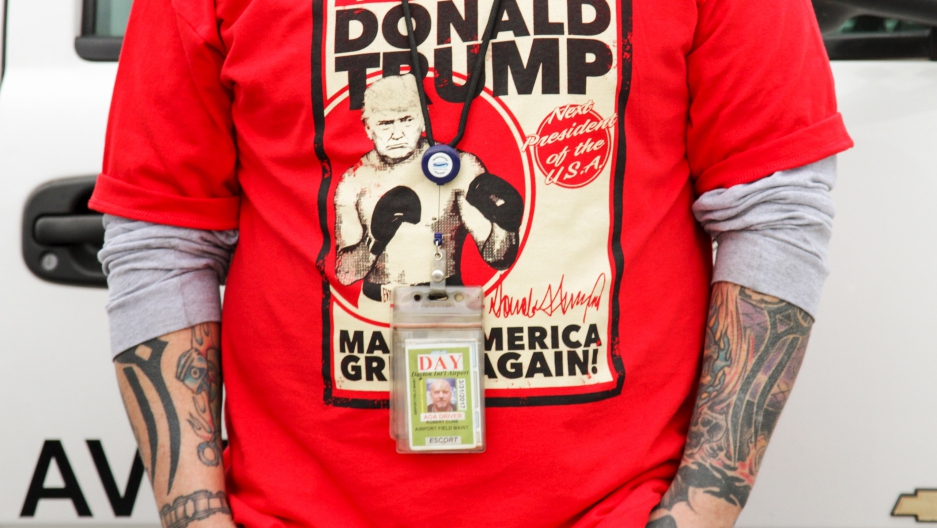 A Donald Trump supporter outside a rally at the Dayton International Airport in Dayton, Ohio.

Mention free trade at a Donald Trump rally and you won't hear a round of applause — the Republican frontrunner says he'd like to "break" the North American Free Trade Agreement to keep more jobs at home. His Democratic competitor, Bernie Sanders, calls NAFTA an "abysmal failure" for US workers.

But many economists don't see it that way.

Gordon Hanson of the University of California, San Diego, says NAFTA saved the jobs of many US auto workers by preventing the collapse of their industry.

"Absent NAFTA and the ability of US auto companies to locate production in the US and Mexico and Canada, we might have lost the whole lock, stock and barrel as a result of increasing competition from China and the rest of Asia," he says.

And he says if a new US leader pulls out of NAFTA, it would endanger relations with Mexico.

"We would put at risk a deep relationship we've developed with Mexico over 25 years that's fundamentally changed the way that North America works" he says. "I think that would be an enormous mistake and I would hope that a lot of what we're hearing in terms of criticism of NAFTA and using Mexico as a political piñata is just posturing."

Hanson admits it's been a tumultuous era for the US auto industry. But he disagrees with what he considers the mantra of US labor leaders.

"What they often say is, 'Trade is bad, bad, bad,'" Hanson says. "But if you look at the position of the US in the global economy, you'd say, 'The US has done pretty well.' Look at our ability to export technology products globally. What would Silicon Valley be without active participation of the US in global markets?"

Hanson agrees that trade pacts are disruptive, and says many American workers who lost their livelihood as a result of pacts like NAFTA have been overlooked. But on the whole, he thinks trade agreements have more positives than negatives.

Still, he doesn't think the US has properly dealt with people whose jobs were affected negatively by those global trade.

"You can't say to that person, 'Look, free trade has made you better off,'" he says. "That worker has a legitimate claim to say, 'Look, I've been hurt by increased competition that the US has faced from global markets.' Even as the US has benefited nationally from these greater market opportunities, not everyone in the US economy has. ... We should have a set of policies in place that help workers adjust to a more intense globally competitive environment. Unfortunately we haven't really done that."

And he says US policymakers have sown the seeds of an anti-trade rebellion by not assisting workers hurt by NAFTA, trade with China and other dimensions of global trade.