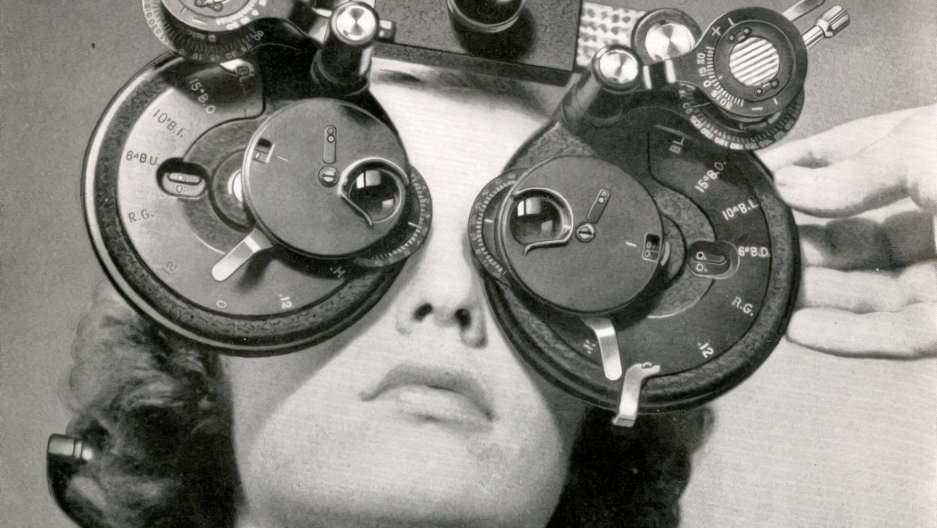 Woman looks through a phoropter in 1945.

Courtesy of American Academy of Ophthalmology Museum of Vision

When ophthalmologist Lisa Park goes to parties people come up to her with questions about their eyes. They quiz her about vision loss, and pull artificial tears out of their purses for her to examine.

“Everyone's curious about their eyes,” Park says. “Everyone worries that wearing reading glasses will make you more dependent on glasses.”

Myth #1: You should exercise your eyes

While exercising the rest of your body is a good idea, Park says it’s not necessary to exercise your eyes.

“Over the age of 40 the ability to see close gets harder and harder and that's just a natural thing,” Park says. “This happens to everybody and exercising or trying to do things to prevent that from happening unfortunately doesn't really work so well. ... There are some people who have certain conditions where they can benefit from what we call pencil push-ups — looking at a pencil closer and closer to their eyes but that's for particular types of conditions. [For] the vast majority of people, I’m going to say use your eyes and don't worry about exercising or not exercising them.”

Myth #2: Don’t read in the dark (and wearing glasses makes your vision worse)

“Absolutely not true. ... Children can see better in the dark than we can. As we get older, our night vision is not as good as it is when you're young. But reading, using your eyes for distance or for reading, wearing your glasses or not wearing your glasses — glasses are neither a crutch nor are they a therapy — unless you have crossed eyes or lazy eye, glasses just help you see better.”

Myth #3: Spending lots of time on your iPhone won’t affect your vision

It may be OK to occasionally read in the dark, but Summers says there are some studies that warn about the hazards of spending too much time indoors or on an iPhone.

Myth #4: Everyone with eyesight problems should get LASIK surgery

Park herself has eye problems, but she has not had LASIK surgery. Instead, she wears glasses. Surgery, she says, is not always the answer.

“It's a great procedure,” Park says. “For the right candidate. The most important thing is to be evaluated fully by an ophthalmologist [who] has experience in doing advanced testing of the eye to determine whether you're a good candidate. And not everybody is.”

Myth #5: If you don’t have any symptoms, your eyes are fine

Most people with eye problems have symptoms such as a loss or worsening of vision. But some people have serious eye issues and they may not have any symptoms.

“[There are] two major forms [of glaucoma]. Ninety percent of glaucoma is open angle glaucoma. It has no symptoms. You don't know you have it until you have irreversible peripheral visual loss. Early diagnosis, early treatment with simple drops prevents blindness,” Summers says. “Narrow-angle glaucoma is much less common in United States. You have no symptoms until one day you wake up or you are walking down the street and you get pain, nausea, redness and perhaps irreversible loss of vision. That is a medical emergency, it requires a laser treatment of the iris that takes about five minutes. ... So a lot of times patients when they come in I look at their eye and I say your eye has narrow angles and you need to have this laser treatment. And they say, ‘But I have no symptoms.’ Well, we’re not going to wait until you have them.”

Myth #6: Seeing ‘floaters’ is always a normal part of aging

“Near-sighted people often get floaters in their 20s and 30s and these are just when you look up at a blue sky or a white board, you’ll see little things floating around. That's little degenerated cells in the vitreous of our eyes. It's like a tennis ball with a little jelly in it. And these little specks don't go away. Those are our regular floaters,” Summers says, “But if you notice many new floaters, persistent flashing lights, loss of vision over part of your eye, that is a symptom of a retinal tear or retinal detachment and I think a really important message is ... any ophthalmologist [who hears of a patient] with new floaters, flashing lights, loss of vision or pain in the eye, they will generally say, ‘Come right over.”

BONUS: Figure out which of your eyes is dominant

Summers says everyone has a dominant eye, and when people are fitted for contacts once they're over 40, optometrists and ophthalmologists can tailor the lenses. They can fit one eye for near and another for far — meaning there's no need to switch lenses for reading and playing tennis.

Curious which of your eyes is dominant for near and which for far? Summers suggests a simple test you can do at home:

I picked this cute picture of my boys when they were in preschool. Pick an object about 15 feet away. Courtesy of Dr. Anne Sumers.
Step 2 — Extend both of your hands in front of your body and form a small triangle with your hands.

To do this, put the tops of your pointer and middle fingers together so they touch, and then rest your thumbs one on top of the other. Extend both of your hands in front of your body and form a small triangle with your hands. Courtesy of Dr. Anne Sumers.
Step 3 — With both eyes open, look through the triangle at the object. Look through the triangle at the object. Courtesy of Dr. Anne Sumers.
Step 4 — Close your left and right eyes separately.

If you can still see the object, your right eye is dominant.

If you close your right eye and can still see the object, then your left eye is dominant.