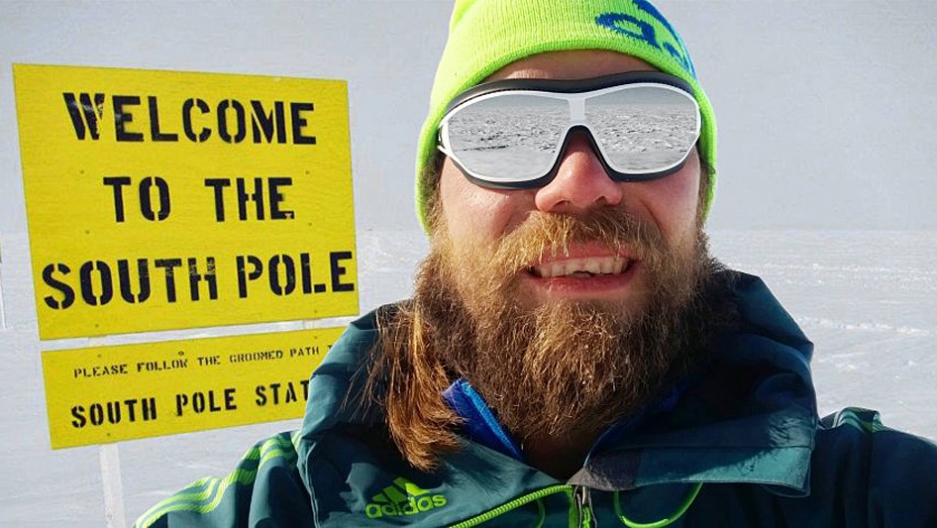 This photo was supposed to be selfie proof of Martin Szwed's claim of skiing solo to the South Pole in just 14 days. He later said the photo was a montage.

In 2011, Norwegian Christian Eide broke the world speed record for skiing solo to the South Pole. It took him 24 days to cross 730 miles, the last 30 hours of which he skied straight through without sleep.

But Szwed’s claim began to unravel almost as soon as he issued his statement — his selfie at the pole was revealed to have been photoshopped, and flight logs from Antarctica contradicted his story — but not before he made headlines around the world.

From Robert Peary’s disputed claim of being the first to reach the North Pole in 1909 to Austrian alpinist Christian Stangl lying about climbing K2 in 2010, fraud is nothing new in the adventuring world, but polar adventurer Eric Larsen is hoping this case might be the one that convinces people it’s time to do something about it.

When Outside Magazine contacted Larsen to look into Martin Szwed’s claim of breaking the South Pole solo record, he knew right away: This was science fiction.

“For someone who had never been to Antarctica previously, with no experience whatsoever, to smash this longstanding record by roughly 10 days was just laughable,” Larsen says.

But he felt the problem went deeper, to the very heart of the question: What is a modern-day adventurer? In a world of Google Earth and drones equipped with virtual reality cameras, there are no unmapped crannies of the world left to explore.

Yet, generations of men and women raised on the stories of Shackleton and Amundsen, continue to chase the same high.

Now, the real forefront of exploration is more about the how than the where — how can we make challenges that are more difficult?

In an effort to distinguish by-now familiar feats, athletes are adding qualifiers: First person to reach the pole solo. Unassisted. On a tricycle. Or a snowmobile. Barefoot. Backwards. These records start to sound a little ridiculous, but the stakes are real: high-dollar sponsorships, lecture tours, book deals.

“It is very difficult when you are facing the potential for failure, and the finances involved are very high,” Larsen says. “Our culture does not celebrate second place or failure so there is a lot of pressure. I know that personally.”

In 2012, Larsen failed in his own effort to become the first person to bike across the South Pole. 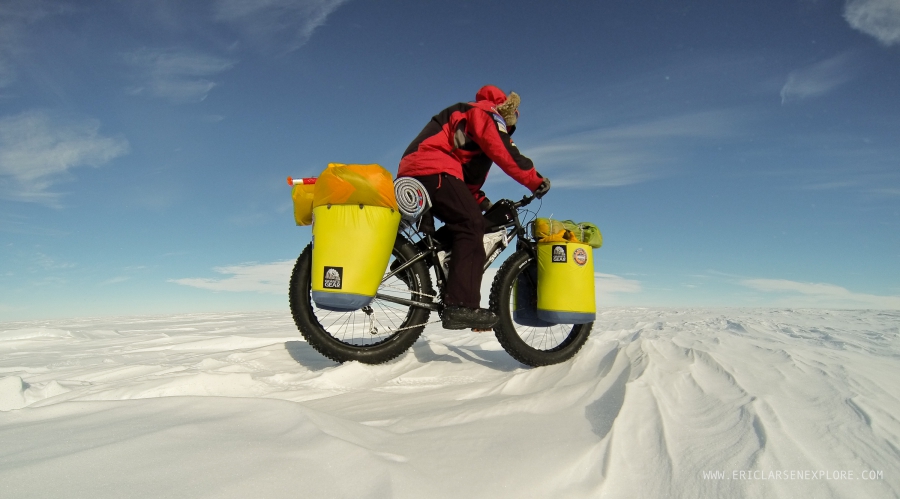 Eric Larsen took this photo of himself on his attempt to become the first person to bike across Antarctica to the Geographic South Pole. He set up a camera on a tripod, and used an intervalometer.

By definition, these ventures take place hundreds of miles from civilization. And Larsen points out that polar adventure doesn’t have rules or any sort of governing body.

“It's gotten to the place where basically anyone can claim any kind of record that they want, and there's very little vetting that goes on.”

In an age where a major news headline is only a tweet or an Instagram post away, the temptation to lie — or more commonly, stretch the truth — is only growing.

“If you look at Martin [Szwed], it's what we call a fantasy expedition. It never happened,” says Swedish-born alpinist Tom Sjogren. In 2002 he created Adventure Stats — a website dedicated to exploring something else: allegations of fraud in the adventure community.

“Then we get the other type of cheating, which is claiming you did something even though you didn't really do it. You kind of did it. You say you were solo, but you weren't really solo,” Sjogren says. “And I would say those are the really, really bad ones because it destroys the whole adventure community and it destroys the spirit of exploration.”

All this might seem like the piddling problems of a fringe sport. But the boundaries of human endeavor are defined by the extremes. These records draw the line between the possible and the impossible, the human and superhuman. Both Larsen and Sjogren (who runs Adventure Stats as an unpaid volunteer) hope the adventuring community will finally unite around some core standards — even, Larsen suggests, a numerical scale of difficulty such as the one developed by rock climbers.

In the meantime, Szwed continues to claim he really did reach the South Pole in record time.

“I still say what I say: I was there. I did the record,” Szwed said in an interview via Skype from his home near Stuttgart, Germany. “I challenge everyone, I challenge the whole world. I do it one more time. I show it that I can do it. I do it under your conditions; it doesn’t matter to me, and I will do it again.”

To prove it, he’s looking for sponsors to fund another trip to the pole. Think about it, he says, an alleged fraud makes a last bid to save his reputation and prove the world wrong?

And that, at least, is probably true.