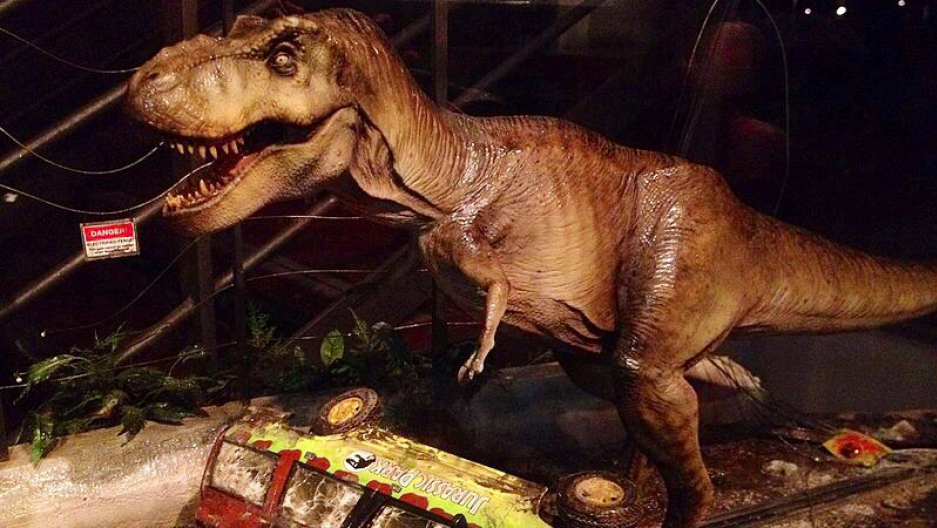 A reconstruction of the stop-motion scene of the destroyed car at the National Museum of Cinema in Turin, Italy.

If you’ve watched the original Jurassic Park movie, you’ll remember this scene of a cartoon character — “Mr. DNA” — explaining how the film’s scientists were able to extract dinosaur blood from an ancient mosquito, isolate dinosaur DNA, and in turn, create new, living dinos.

Michael Crichton, author of the book that inspired the movie, got the idea from the work of paleobiologist George Poinar Jr. In 1982, when he was a professor of invertebrate pathology at UC Berkeley, Poinar and his electron-microscopist wife published a study describing their discovery that amber could preserve intracellular structures, such as nuclei and mitochondria, in an organism trapped inside (in this case, a type of fly). 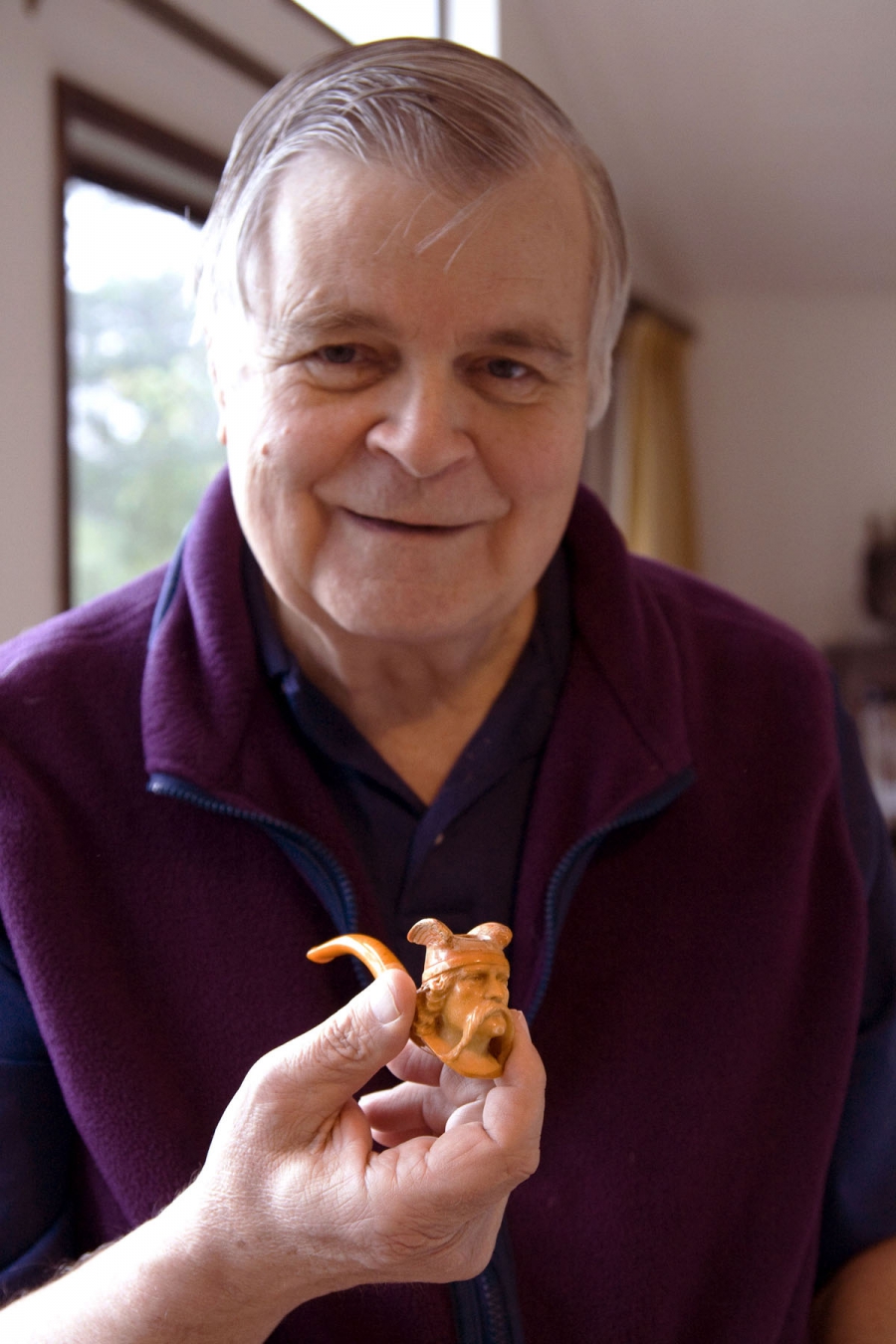 That work led to a lifelong obsession with amber, in which Poinar would find, among other specimens, the oldest known bee, the first known bat fly fossil and the most complete flower from the Cretaceous Period. And just this past February, he co-authored a paper in Nature Plants describing a new species of neotropical flower found in amber from the mid-Tertiary Period.

We recently spoke with Poinar, 79, now a courtesy professor at Oregon State University, about what led him to investigate specimens trapped in amber, his thoughts on de-extinction and his inspirations.

Insects seem to pique your curiosity. How did you first get interested in entomology?
That’s a long story, because my father was a musician, and he wanted me to be a musician also. When I was 5 years old, I was practicing an hour a day on the violin and the piano, taking lessons. But as I grew older, I eventually rebelled against it.

I was naturally attracted to nature. It started with birds first. When I eventually went to Cornell, I decided I was going to major in ornithology. I started out with Dr. [Charles] Sibley there, and after working with him for a while, we decided that I should take a minor. I moved over and I worked with Dr. [Loren] Petri in botany for a while. And then I had an opportunity to do some summer work with an entomologist. That’s when I first became interested in insects.

But I was always interested in amber from a very young age. It was my mother who read passages from a book by Willy Ley called Dragons in Amber. On the front page of it was a little drawing of a weevil in amber, and that figure kind of imprinted on my brain. When I was doing my Ph.D. work, I worked on weevils. So everything kind of came together and by now, of course, I’ve described, with colleagues, about 100 different types of weevils in amber.

How did you begin working with amber as a scientific object?
The weevils led to nematodes — nematodes are small roundworms, and I studied those that were associated with insects. One day at UC Berkeley, Joe Peck from the department of paleontology came by and he said, ‘You work with nematodes; how would you like to look at some nematodes in amber that we collected from Mexico?’ I thought, ‘Wow, that’s interesting.’ So I went over there and he showed me some pieces of amber, and one had a whole family of nematodes in it!

I studied these and then came out with my first paper on amber, about nematodes in Mexican amber. That was back in 1977. After publishing that, then I became interested at looking at more amber. People contacted me and said, ‘We have some amber pieces, would you be interested in looking at those?’ Everything kind of grew from there.

What led to your discovery that cell organelles could be preserved in specimens ensconced in amber?
My wife was an electron microscopist then at Berkeley, working in the same department, and I decided to see whether there might be some tissue remaining [in specimens trapped in amber]. So she sectioned one of the specimens that we had — a fly in Baltic amber — and discovered then that yes, the preservative qualities of amber were so great that they actually preserved intact cell organelles, such as nuclei, lipids, mitochondria and things like that. That was probably one of the most exciting projects I ever worked on, to make that discovery along with my wife, Roberta.

And how did you eventually get involved with Jurassic Park?
From what I gather, from what Michael Crichton said, he had written Jurassic Park, but he hadn’t decided how he was going to get the dinosaur DNA, and when he read the paper [on the fly in Baltic amber], this gave him the idea that he would obtain it from mosquitoes that bit the dinosaurs.

So the film department called us and said they were doing this, and they wanted to come and film our lab. And then Michael Crichton contacted us separately and flew out, and we talked to him. Very nice, tall person. Then, that was it. The next thing we knew, the book was out and then the movie was out. We were quite surprised when we heard about all of the casting!

What did you think of the overall science portrayed in the film? Was it accurate?
I felt that the amber shown in the film was authentic. The biting insect in the amber that supposedly had dino DNA in its gut was an “elephant mosquito” — a species of Toxorhynchites — which are the largest known mosquitoes. While it looked good and fierce, it does not suck blood, but lives on food reserves built up by the predaceous larvae. They are very cool. 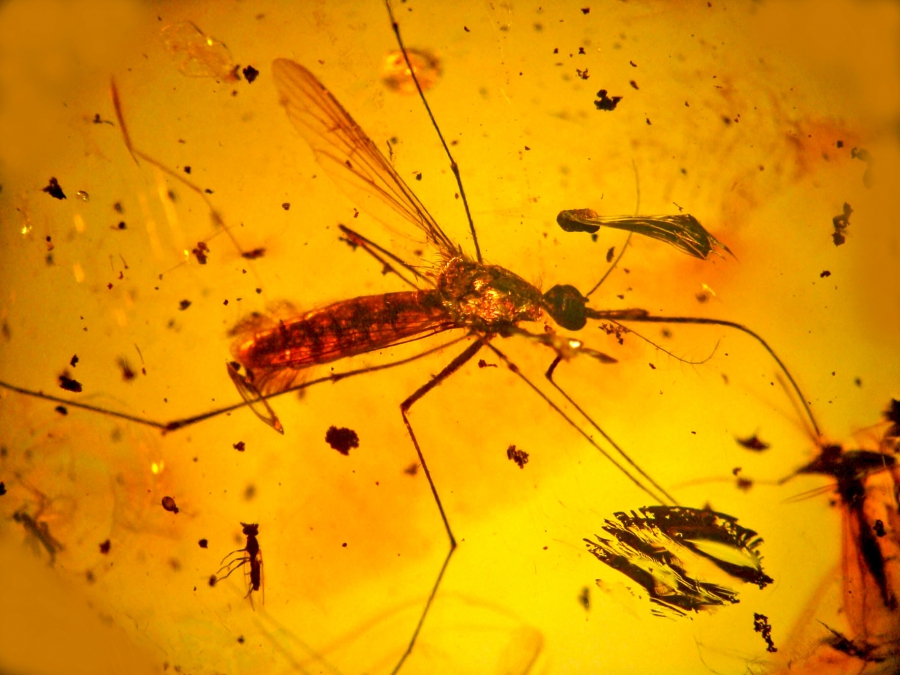 An elephant mosquito from Poinar’s collection.

What has been your favorite specimen so far?
Aside from the study that we did with the electron microscope, my other interests are tracing human diseases in amber. I worked in Africa on tropical diseases there, and so I used that experience to look at insect vectors, like mosquitoes in amber, and I knew what the stages of these parasites looked like in the vectors. So I think my most interesting [discovery] was to find evidence of malaria in mosquitoes and biting midges. It went back 100 million years, so now we know that malaria was around for a long time — it could very well have plagued the dinosaurs. There are many different lineages of malaria.

And then the other [memorable discovery] was finding some Lyme disease spirochetes in a tick, which was very interesting, and plague-like bacteria in a Dominican tick, showing that plague-like organisms have been around for a long time as well.

So looking for these various pathogens — it’s been kind of a goal of mine, because I feel that they can show how these organisms evolved over a long period of time, even long before humans entered the scene.

What are your thoughts about de-extinction—that is, using ancient DNA to resurrect organisms?
I think that it’s very interesting, and I think it’s possible to maybe introduce some ancient DNA into animal genomes. I don’t think it’s possible to bring a dinosaur back from what we have; I’ll leave that to the books and the movies. Today, bringing back ancient animals is based more on Pleistocene remains like bones, because they’re not so old and easier to get DNA out of.

But I think it might be possible to get small snippets of DNA still, from amber specimens, in order to make comparisons with present-day forms. I think one of the problems is how to get a system to repair the DNA [extracted from amber]; we know the DNA is probably damaged at various points. And then to find the right specimen, because once you get the amber out of the ground and it sits around for a while, air can slowly get into it. The surface is slightly porous, so air can get in, and of course any DNA that’s present will be degraded.

So the thing is to get the amber when it directly comes out of the ground, because when it’s in the rock layer, it’s protected from oxygen and also from sunlight. So, it’s a matter of getting the right material and then hopefully being able to repair some of the DNA. [Poinar himself has published work reporting extraction of DNA from insects preserved in amber.]

What would you resurrect, if you could?
These would probably be small things that were in amber, maybe nematodes or small flies, or a cockroach, something like that. Cockroaches have long histories and they’re often well-preserved in some of the ancient amber. Small little bees; bees are another group that I’m interested in. We’ve already obtained some DNA from bees in Dominican amber, so it’d be nice to continue working on that. It would be nice to bring back some bacteria that actually could be cultured. That would probably be the easiest because you could culture it, and then you can make comparisons with present-day bacteria using DNA analysis.

Who are your scientific idols?
Certainly Charles Darwin. I always liked reading about Charles Darwin because of his determination to stand up against public opinion back then. And, also, he was such an acute observer of nature and natural histories.

I very much liked the books of Robert Desowitz. He was a tropical parasitologist, and he wrote a number of popular books explaining to the public about diseases—the evolution, and things like that. His books were very interesting and well written, and I always had high regard for him.

As far as growing up, when I was younger, probably I was most impressed with the writings of Bertrand Russell. I was very interested in his theories, his humanitarian ideals, his freedom of thought, especially his book A History of Western Philosophy.

What advice would you give to any budding entomologists or paleobiologists?
I’d tell them to learn as much as they could about biology in general, because when you’re looking at amber pieces, there’s all kinds of things. You might find a flower in one part of the piece, and there’d be a little gnat in another part, or there’s a mite here. So, I would say it’s good to have a general background on being able to identify creatures at least at the ordinal level so that you can then call on a specialist. This is what I try to do with the flowers — identify them down to a particular group and then contact a specialist who’s been studying this group all their life, who obviously knows more than I would ever possibly know.

If they’re going to work with amber, definitely take a course in gemology, because it involves cutting and polishing gems.