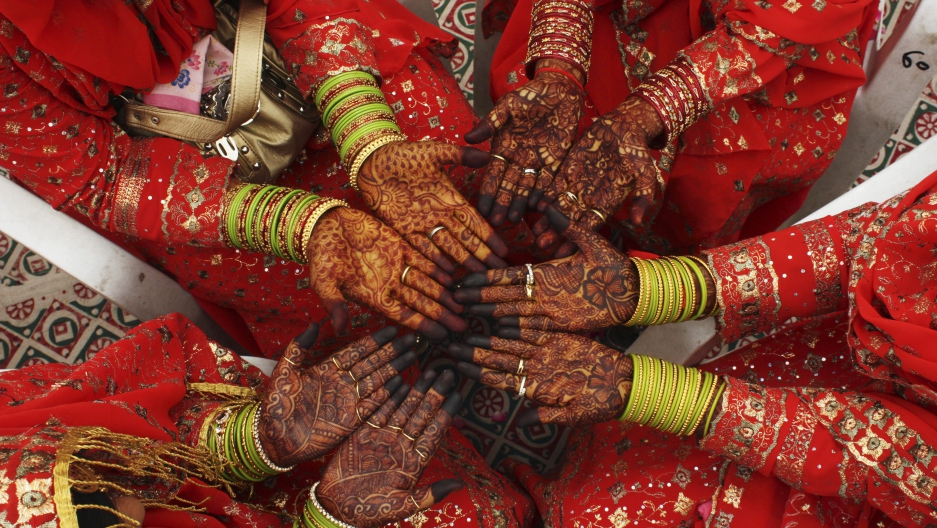 Brides display their hands painted with henna during a mass wedding ceremony in the western Indian city of Ahmedabad.
Credit: Amit Dave
Share

NEW DELHI, India — One in every four Indians is illiterate, and one out of every five lives below the poverty line. Many in the country are deeply religious.

These qualities turn ominous when they make it easier to get away with raping a woman in her own home.

While laws on domestic violence and rape exist in India, rape in the domestic sphere remains unacknowledged. India is one of the few countries in the world that have yet to criminalize marital rape, despite studies and statistics that show a terrifyingly high incidence. Earlier this month, the explanation for this oversight came from an unexpected source.

“The concept of marital rape, as understood internationally, cannot be suitably applied in the Indian context,” said Maneka Gandhi, the minister for women and child development, in response to a question posed to her in Parliament, “due to the level of illiteracy, poverty, myriad social customs and values, religious beliefs, mindset of the society to treat the marriage as a sacrament, etc.”

More from GlobalPost: Women are demanding the right to worship at India's temples

Gandhi could not be reached this week to clarify what she meant.

But she was repeating, word for word, the Indian home minister’s answer to a similar question last April. The government officials seem to be saying that too many Indians aren’t ready to believe rape can happen within a marriage. Critics consider that idea laughable.

Mallarika Sinha Roy, a professor of women’s studies at the Jawaharlal Nehru University, pointed out that given the high frequency of marital rape found by multiple studies in India, it is unlikely that the crime is limited by economic status.

“Illiteracy and poverty being cited as rationalization [to not criminalize marital rape] will not hold to reason, because many people belonging to those sections are more vulnerable to rape,” said Roy. “Poverty has nothing to do with people’s level of understanding of sexual violence, particularly women who actually every day show incredible substance and acumen in surviving.”

And if the government’s citation of India’s social customs and values refers to a higher moral standard that would somehow prevent marital rape, social workers find that the reverse is more likely. According to Joshi, who is also a social worker, customs that teach both boys and girls that consent isn’t relevant in a marriage have in fact forced women to accept marital rape as a norm.

“Women never use the word ‘rape’ when they talk about their husbands. They say ‘he was forceful and I didn’t like it, but I just lay there because I did not want to be beaten,’” said Joshi.

The social values that expect women to provide sex after marriage also expect them to abstain from sex before. India’s controversial and recently outlawed “two-finger test” was, before 2014, an accepted test of a rape victim’s habituation to sex. Some have interpreted the government’s citation of “values” as a reference to the difficulty of proving rape against a married, sexually active woman. Indira Jaising, a prominent human rights lawyer at the Indian Supreme Court, pointed out that these moral standards on premarital sex cannot apply under judicial consideration.

“Courts are accustomed to dealing with rape of sexually active women in the case of a stranger perpetrating the rape, so why should there be a problem with married women?” she said.

While sex is considered a spouse’s right in India — denying it is grounds for divorce — it’s not one that trumps a woman’s rights over her own body, Jaising said. The ministry’s reference to “religious beliefs” making marital rape impossible therefore rings hollow.

“The constitution does not visualize a situation where two rights conflict, there is always a way of giving full effect to both rights. There can be no conflict between the right to practice religion and the right to bodily autonomy for a woman, they must coexist. No religion sanctions rape, be it of your own wife.”

“When we teach people that respect and equality is important, that marriage is trust, it will strengthen the institution of marriage, not break it,” she said.