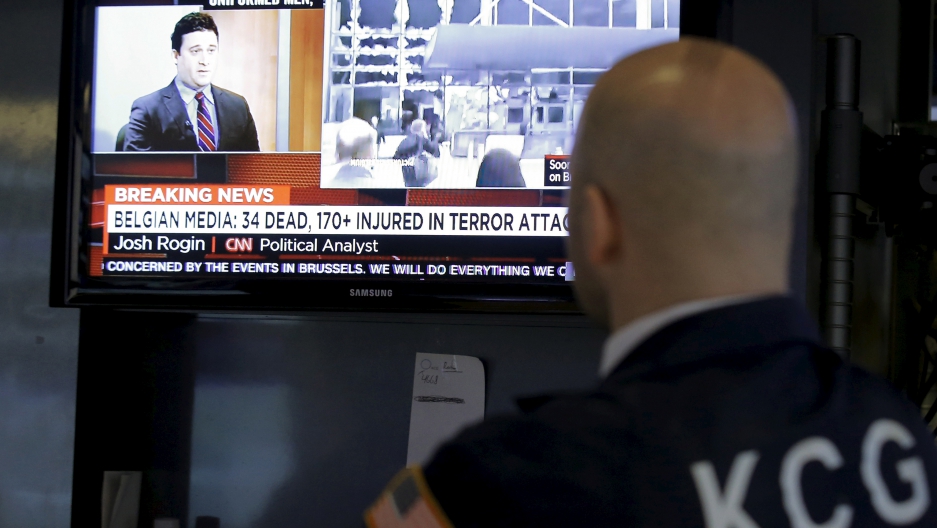 A trader watches developments following the explosions in Brussels, on the floor of the New York Stock Exchange.

A new, bumpier world? And one with things like terror attacks factored in for risk asessements?

Global financial markets reacted to the deadly terrorist attacks in Brussels on Tuesday with predictable swiftness. But it didn’t take long for calm to return.

Airline, hotel and cruise ship stocks in Europe and the United States suffered some of the biggest losses as investors worried about the attacks' potential impact on the travel sector.

But by the time the Islamic State claimed responsibility for three explosions at Brussels’ international airport and metro system that left dozens dead and many more injured, major stock indexes around the world had recovered most of their losses. And markets were mixed on Wednesday, without big swings.

It seems that global markets are getting used to terrorism.

"It is all to do with the events in Brussels ... but the reaction is muted, which also shows that after all the terrorist attacks we have seen, markets have learned to live with these kind of things," Rabobank euro zone economist Emile Cardon told Reuters.

More from GlobalPost: The latest on the Brussels attacks

The Wall Street Journal also highlighted the apparent trend, pointing to research by the University of Cisneros in Madrid that showed investors were becoming desensitized to deadly violence.

The first day of trading after the 9/11 attacks in the United States saw the Dow Jones Industrial Average fall 7.1 percent. And the London bombings in 2005 sparked a 1.4 percent drop on the FTSE 100.

On Tuesday, the main indexes in Paris, Germany and France closed in positive territory and Wall Street was trading higher, too.

The muted response on global markets, however, doesn’t mean the Brussels attacks won’t have an economic or political impact.

If European Union countries were to further tighten border controls it could interrupt the flow of people and goods in the region, CNBC reported.

"The European Union, the economy is $18 trillion. If it does become more difficult to move goods, people, and so forth, that's a big issue for the markets," Joseph Quinlan, chief market strategist for US Trust of America Private Wealth Management, told CNBC’s “Squawk Box” show.

The attacks could also influence the outcome of Britain's June 23 referendum on whether to stay in the EU.

Pro-Brexit campaigners are using the attacks to bolster their argument that Britain should leave.

Mike Hookem, the defense spokesman for the right-wing UK Independence Party, said the Brussels attacks showed that the "Schengen free movement and lax border controls are a threat to our security."

Tuesday's events also could feed xenophobia in Europe and harden the region's political response to the ongoing migration crisis.

“There is a growing perception among European public opinion that EU leaders are not in control of the continent’s terrorist threat, given this attack comes on the heels of events in Paris last year," analysts from the political consultancy firm Eurasia Group said. "Combined, these attacks will increase xenophobic and anti-immigration sentiment across the EU, which has already been rising in light of the EU’s ongoing refugee crisis."

European markets may have grown accustomed to terrorist attacks. But they might respond less calmly if the fallout from those attacks destabilizes the euro zone's political and economic status quo.

This story was cross-posted from our colleagues at Global Post.