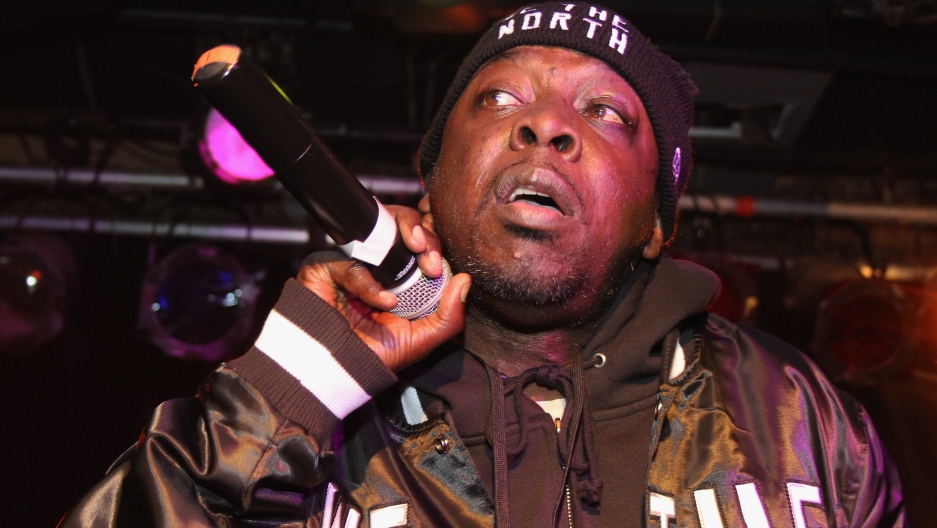 Phife Dawg Performs for the #BigTicket showcase at Tattoo on February 6, 2015 in Toronto, Canada.

Rapper Phife Dawg was the key to the band A Tribe Called Quest’s unique sound. His lyrics regularly referenced Caribbean dancehall music and he frequently rapped in patois.

Phife died Tuesday at the age of 45.

He started the band in 1985 with Q-Tip, Ali Shaheed Muhammed and Jarobi White.

He had struggled with Type 1 diabetes for years, and received a kidney transplant from his wife in 2008. Phife, who was born Malik Isaac Taylor, told NPR in January that he was on the list for another transplant. His official cause of death is not yet public.

A perfect example of Phife's musical style is his verse in ‘Jazz (We’ve Got)’ where he references Shabba Ranks — a legendary Jamaican dancehall and reggaeton artist from the early 90s. It starts about 1:30 in:

"He was just unabashedly Trinidadian. He was unabashedly West Indian, and unabashedly Caribbean," says Garth Trinidad, a DJ, artist and critic for radio station KCRW. Trinidad met Phife in 2001 when he interviewed him about some of his solo work. Every time they ran into each after that, Phife recognized him and would ask him about his life.

"Q-Tip was the water, and Phife was the fire. He brought the flame," he says. "Q-Tip would season the meat, and Phife would barbecue it. Those two were a one-two punch."

The Five Foot Assassin wasn’t the only member of A Tribe Called Quest who was of Caribbean descent: Q-Tip’s father was from Montserrat. The group was also one of the three founding groups that made up Native Tongues — the hip-hop collective known for Afrocentric lyrics that eventually grew to include Queen Latifah, Black Sheep and Mos Def, among others.

But even among the other groups in Native Tongues, Trinidad says A Tribe Called Quest stood out.

"It sounds to me like they were more comfortable being themselves," he says. "They weren't acting. They weren't trying to be anything else than who and what they were. And a lot of who they were came from their upbringings, their backgrounds and their heritage."

Phife stands out from the rest of the group, he says, because of his boldness. He would regularly start verses in patois, fill the middle with references to Caribbean culture and finally end the verse in patois as well.

"He made you take notice," Trinidad says.

There are plenty of other examples of Phife’s influence in A Tribe Called Quest’s sound. And there’s not many better examples (in my head) than "His Name Mutty Ranks." The song even ends repeating a line from "You Nuh Ready For Dis Yet" by Jamaican reggae artist Tanya Stephens.

It's tough to imagine what hip-hop would sound like today without the influence of A Tribe Called Quest, and Phife specifically.

"I think we'd be experiencing hip-hop music and the surrounding culture differently if Tribe never did what they did," Trinidad says.

Musicians, journalists and fans around the world are publicly mourning his death on Twitter and Instagram. At a concert in Australia, rapper Kendrick Lamar remembered him by having his fans chant Phife's name:

If you're like most Tribe fans today, feeling at a loss, here's our playlist of our favorite tracks from A Tribe Called Quest and Phife Dawg, along with some of the (many) artists he influenced. Note: Some of these songs may not be appropriate for younger audiences.