Jamal Mohamed remembers going to his high school and either being hungry a lot or feeling sick to his stomach and going to the nurse.

“I remember days spent in the nurses’ room because my stomach ached, but not because of something I ate,” he says. Rather, it was the stress of eating food that was not halal, meaning meat and other food wasn’t prepared according to Islamic law.

Mohamed is from Somalia and came here as a child refugee in the late 1990s. American food, much of it non-halal, was new to him, but because Mohamed qualified for free lunch at school — like nearly all his fellow students— he would break religious rules and eat what was served.

“Sometimes, I would take the burger and take out the meat,” he says. Or, he would eat the chicken and “my body would have a reaction to it, mentally, because what my body is consuming is not halal.”

It took a while, but as San Diego’s Muslim community grew, parents began asking schools for different food choices, after noticing their kids were skipping lunch. Now, something new is on the menu at Mohamed's old high school, Crawford High: a chicken dish.

“I was kind of really happy about it because it was, like, wow, they’re starting to care you know about everyone,” says Faisa Mohamud, a 17-year-old senior. Her parents are also from Somalia and she was once one of those kids skipping lunch. “I kind of didn’t really eat that much,” she says. “I would just skip days.”

Last year, she and other students rallied for a halal lunch option and put up signs around school that read: “Eat it or lose it!” — warning that the chicken would disappear as a lunch choice if nobody ate it. 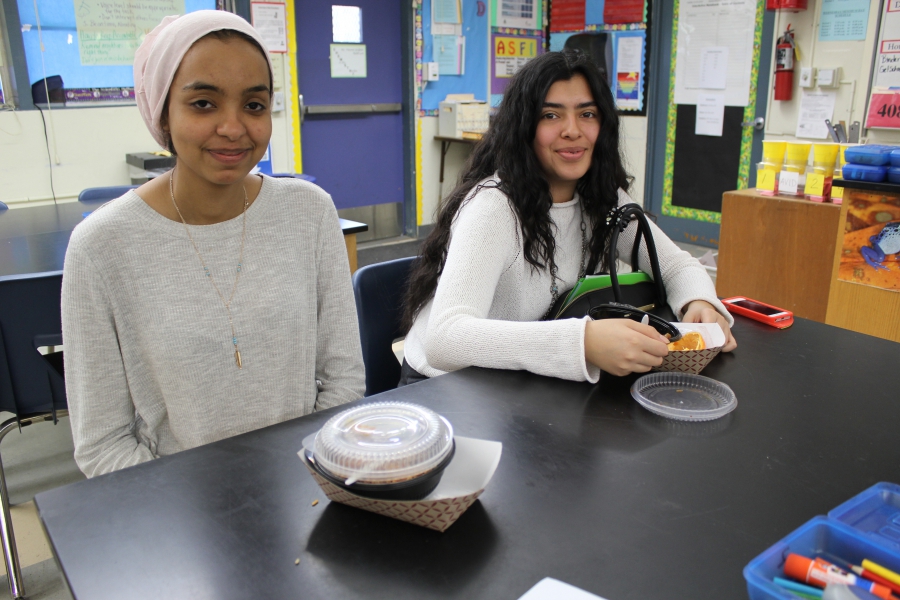 Crawford High School seniors Najma Abubakar, left, and Guadalupe Barron rallied their fellow students to support a halal chicken dish for lunch, recognizing a demand for it among Muslim students.

It wasn’t just Muslim students lobbying for change. A mix of students joined in, including senior Guadalupe Barron, whose parents are from Mexico. She remembers talking to non-Muslim students here about the new halal chicken dish. “At the beginning, since they didn't know what it was, it was like, ‘Oh, I’m not Muslim, so I’m not going to eat that.’ But with the presentations, I think it really helped because a lot of students got educated on what it was.”

Also on board: Gary Petill, who runs food services for San Diego Unified School District. “It’s amazing what the students on the campus can do if it’s something they create, something that they had to be a part of. They own it,” he says.

Petill also saw how a halal meat option took off at schools in Dearborn, Michigan, home to one of the largest Muslim communities in the United States. He realized that switching up the menu meant more than just offering something new to eat — it’s about recognizing change.

“It’s really looking at what do the students want,” says Petill. “It may be halal, it may be different Asian-type dishes. We also have a large Hispanic student population that wants more Mexican food. We design for them because they’re the customers.”

Today, lunchtime lines for the halal chicken are long, and fewer students are skipping lunch now than before. Five elementary schools in San Diego also recently adopted up the halal lunch and New York City is eyeing the program.

Lines for the halal chicken dish at San Diego's Crawford High School are among the longest for any dish served during lunch.

But the chicken is still only served once a week. Other days, students wanting to eat halal can choose tofu salad or veggie chili. But something new is being developed: fish tacos. Also halal (and very San Diego).

For Mohamed, who went to Crawford High a decade ago, it’s all progress. He jokes that he wishes he could do high school over again. “The dynamics are way different then back in the day,” he says. “It’d be much easier right now. Back when I was growing up, every culture was a separate entity. Right now, there’s a mix, like the youth from my culture they have friends from different cultures, but when I was growing up, it was us and them, them, them. Very segregated.” It was back when the idea of having something different for lunch seemed far away.