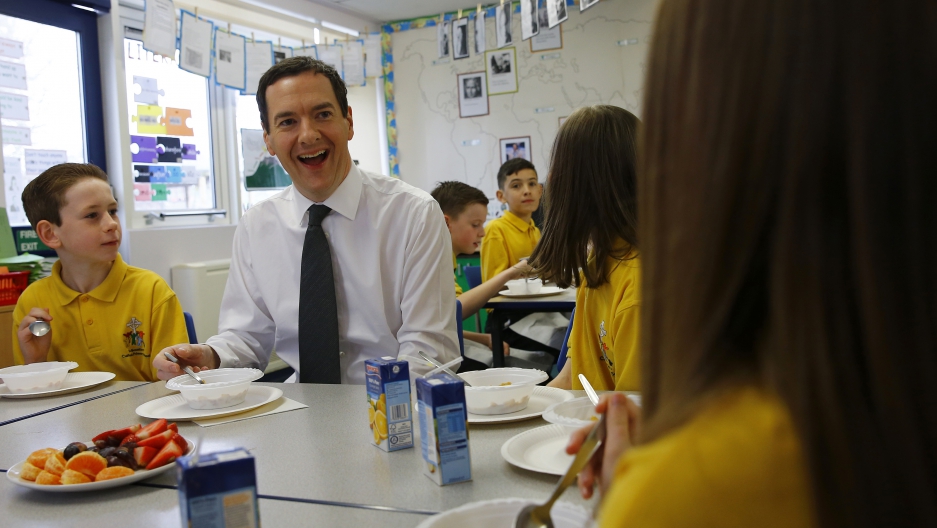 British Chancellor George Osborne, the UK's finance minster, has had a rough week. He’s facing a rebellion from his own Conservative Party colleagues over a massive cut to disability welfare in the budget he delivered. He is under fire for missing economic targets he set himself and leading think tanks are warning of another downturn.

If all that weren’t enough, an excruciating video of him “interacting” with school children has been released, and you almost certainly won’t be able to watch the whole thing.

The chancellor has a history of being awkward around children, but this is something else. It starts with the kids teasing the second-most powerful man in the country by not passing him a ball, and it goes downhill from there.

During a sit-down breakfast in a classroom, he asks the children a series of banal questions while looking at them as though they are food. It’s like the words he’s saying are only to distract his prey while he waits for the right moment to detach his jaw and swallow them whole.

To be fair, talking to children isn’t easy. But anyone who thinks listing the breakfast cereals that are on the table in front of them is an interesting topic of conversation probably shouldn't be in charge of a country’s budget.

“Some Cheerios… Corn Flakes… Rice Krispies over there,” he says to the assembled primary school kids, avoiding all eye contact.

When he laughs, it’s the kind of laugh that you imagine is the last thing someone will ever hear.

Osborne is seen by many as a future leader of the Conservative Party, and in turn a future prime minister. He’ll have to get over his crippling fear of humans under the age of 18 if he wants to assume the highest office in the land.