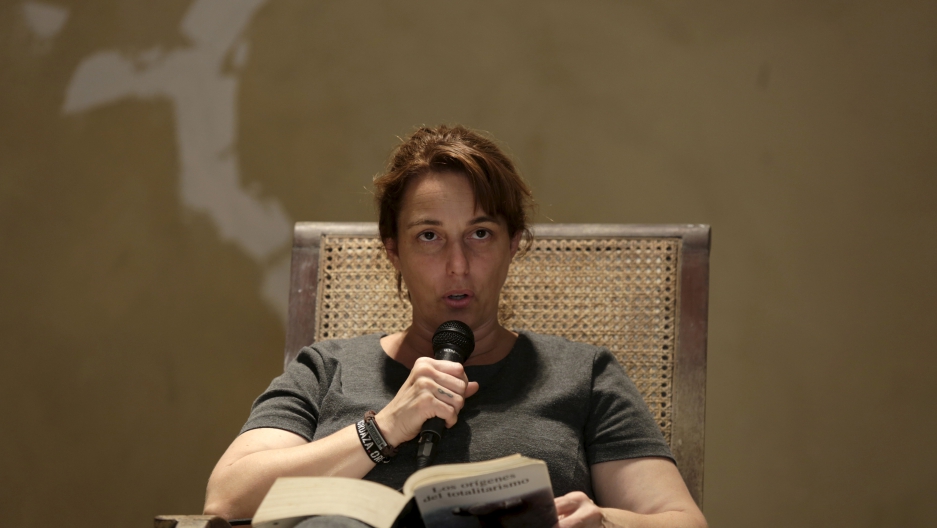 Cuban artist Tania Bruguera reads from Hannah Arendt's book "The Origins of Totalitarianism" as part of a 100-hour collective reading in Havana May 20, 2015.

The installation and performance artist says the US leader will miss a big opportunity if his Havana visit is simply a "photo op" he uses to burnish his legacy.

"That would be a mistake because Cubans will feel used, and that will actually reinforce all the propaganda we've heard for so long," she says. Instead, she urges Obama to call upon his past as a community organizer, "who can talk to people's heart, who can actually mobilize people."

Bruguera isn't a fan of Cuba's government. She was arrested by Cuban authorities three times in 2015, including after her attempt to stage a public performance in Havana's Revolution Square.

She cautions Obama not to use rhetoric about freedom and democracy, because the concepts, she argues, are abstract for most Cubans.

"Cubans are kind of anesthetized with words that they think belong to campaigns against Cuba, campaigns by the CIA, or American agencies, to dethrone the government," she says. "They don't understand that things like human rights, things like freedom of expression, are things that belong to them."

Bruguera says Obama should not self-censor, or be afraid to say things that don't reflect well on Cuba's government. That's a mistake she says Pope Francis made in his 2015 Cuba visit.

"People were extremely disappointed and all the hope we had for that trip deflated very quickly ... because even the pope is self-censoring," she says.

In an effort to bolster free expression, Bruguera is creating something she calls The Institute of Artivism, a space in Havana where she hopes Cubans will combine art and activism to create new visions of their country. And she's using a Kickstarter campaign to fund it.

Bruguera says she's not surprised the Cuban government is afraid of dissident artists.

"The Cuban government and the revolution was great at understanding the power of the symbolic, the power of moving people's souls," she says. "That's what we do as artists. We ask questions, and we ask each individual audience that question, and that's scary for them."