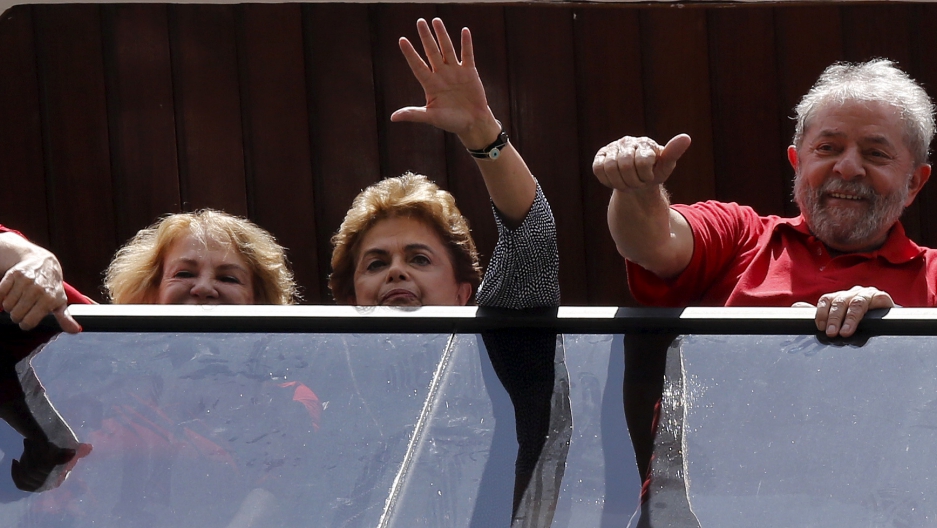 Editor's note: This is a quickly developing story. Check back at GlobalPost for updates.

RIO DE JANEIRO, Brazil — The somewhat crazy world of Brazilian politics just took a new twist: Former President Luiz Inacio Lula da Silva is taking over as chief of staff in his successor’s cabinet, a move that partly insulates him from criminal investigations.

Da Silva, commonly known as Lula, has become embroiled in a sprawling investigation into corruption at the state oil company, Petrobras. The investigation, which has brought down several of Brazil’s most wealthy and powerful people, took a sensational turn this month when Lula was detained for questioning and his property was searched.

In office from 2003 to 2011, the once wildly popular president is revered for overseeing fantastic economic growth, while also bringing tens of millions of people out of poverty. But now Lula is scrambling to protect his legacy and stay out of jail.

Instead, members of Congress must be investigated and tried in the Supreme Court, a process that can drag on for years. The court is currently overloaded with prosecution cases (scores of Brazilian politicians are being criminally investigated), and politician-friendly laws result in some bizarre situations in the legislature.

More from GlobalPost: Brazilians are outraged after release of taped call between Lula and Rousseff

In 2013, The New York Times reported that about a third of Brazilian members of Congress faced Supreme Court charges, ranging from “siphoning off public funds to far more serious claims of employing slave labor on a cattle estate or ordering the kidnapping of three Roman Catholic priests.” It said lawmakers in corruption cases often dodge prison.

The accusations against Lula are pretty mild by the standards of the Petrobras scandal. He is being investigated for allegedly accepting hundreds of thousands of dollars worth of furniture and improvements to properties that prosecutors say he owns. By contrast, other politicians are accused of taking tens of millions of dollars in bribes.

The former president denies any wrongdoing.

Complicating matters, Lula is being investigated by both federal and state prosecutors. The federal prosecutors have yet to charge him with a crime, but last Thursday state prosecutors in Sao Paulo charged him with money laundering in connection to his real estate holdings.

More from GlobalPost: Why Brazil will one day celebrate charges against its beloved ex-president

When he joins Brazil’s cabinet, Lula will effectively be able to brush off the state charges, which he has claimed are politically motivated. The federal case could still proceed against him via the Supreme Court route.

Lula and his supporters have portrayed his sudden acceptance of a cabinet post as a way of giving support to current President Dilma Rousseff. Rousseff is herself facing impeachment, over yet another investigation, and analysts have recently begun saying she’s unlikely to survive her second term in office.

To top it off, a senator now accuses President Rousseff of involvement in the huge Petrobras scandal, too.

Lula will now be serving the same government post — chief of staff — that he hired Rousseff for in his administration.

It’s an odd power dynamic: Deeply unpopular Rousseff has traditionally drawn much of her popularity from Lula, who effectively hand-picked her as his successor. Lula’s recent disgrace and possible conviction could erode much of that support.

But the former president now needs Rousseff as much as she once needed him. As he joins Brazil’s cabinet, he will at least have some breathing room as prosecutors rebuild and renew their case against him.