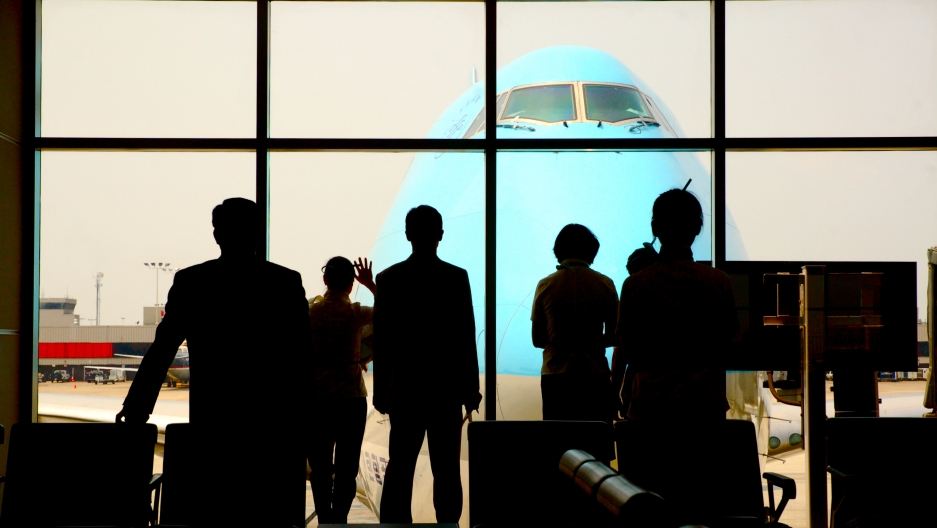 I’m a climate scientist who doesn’t fly. I try to avoid burning fossil fuels, because it’s clear that doing so causes real harm to humans and to nonhumans, today and far into the future.

I don’t like harming others, so I don’t fly. Back in 2010, though, I was awash in cognitive dissonance. My awareness of global warming had risen to a fever pitch, but I hadn’t yet made real changes to my daily life. This disconnect made me feel panicked and disempowered.

Then one evening in 2011, I gathered my utility bills and did some Internet research. I looked up the amounts of carbon dioxide emitted by burning a gallon of gasoline and a therm (about 100 cubic feet) of natural gas, I found an estimate for emissions from producing the food for a typical American diet and an estimate for generating a kilowatt-hour of electricity in California, and I averaged the Intergovernmental Panel on Climate Change and Environmental Protection Agency estimates for CO2 emissions per mile from flying.

With these data, I made a basic pie chart of my personal greenhouse gas emissions for 2010.

This picture came as a surprise. I’d assumed that electricity and driving were my largest sources of emissions. Instead, it turned out that the 50,000 miles I’d flown that year (two international and half a dozen domestic flights, typical for postdocs in the sciences who are expected to attend conferences and meetings) utterly dominated my emissions. 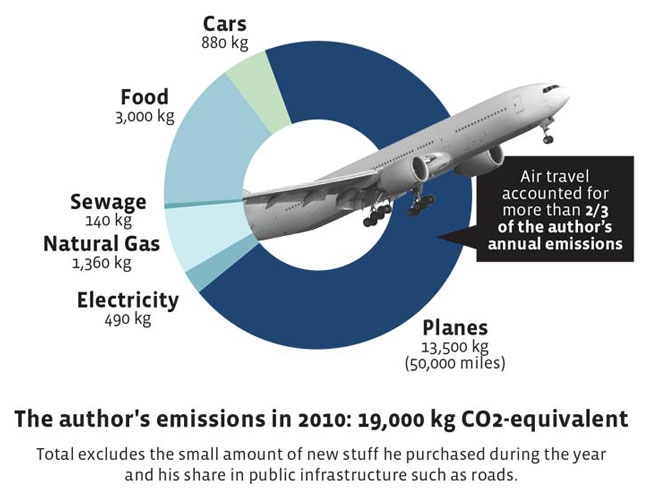 Hour for hour, there’s no better way to warm the planet than to fly in a plane. If you fly coach from Los Angeles to Paris and back, you’ve just emitted three tons of CO2 into the atmosphere, 10 times what an average Kenyan emits in an entire year. Flying first class doubles these numbers.

However, the total climate impact of planes is likely two to three times greater than the impact from the CO2 emissions alone. This is because planes emit mono-nitrogen oxides into the upper troposphere, form contrails, and seed cirrus clouds with aerosols from fuel combustion. These three effects enhance warming in the short term. (Note that the charts in this article exclude these effects.)

Given the high climate impact, why is it that so many environmentalists still choose to fly so much? I know climate activists who fly a hundred thousand miles per year. I know scientists who fly about as much but “just don’t think about it.” I even have a friend who blogged on the importance of bringing reusable water bottles on flights in order to pre-empt the miniature disposable bottles of water the attendants hand out. Although she saved around 0.04 kilograms of CO2 by refusing the disposable bottle, her flight to Asia emitted more than 4,000 kilograms, equivalent to some 100,000 bottles.

I suspect that most people simply don’t know the huge impact of their flying — but I also suspect that many of us are addicted to it. We’ve come to see flying as an inalienable right, a benefit of 21st-century living that we take for granted.

My first change was to start bicycling. I began by biking the six miles to work, which turned out to be much more fun than driving (and about as fast). It felt like flying. Those extra few pounds melted off. Statistically speaking, I can expect biking to add a year to my life through reduced risk of cardiovascular disease.

Other moves away from fossil fuels turned out to be satisfying as well. I began growing food, first in the backyard and then in the front, and I discovered that homegrown food tastes far better than anything you can buy. I began composting, an honest and philosophical practice.

I tried vegetarianism and found that I prefer it to eating meat; I have more energy, and food somehow tastes better. I began keeping bees and chickens, planting fruit trees, rescuing discarded food, reusing greywater, and helping others in my community do the same.

I stopped taking food, water, air, fuel, electricity, clothing, community and biodiversity for granted. I became grateful for every moment and more aware of how my thoughts and actions in this moment connect to other moments and to other beings. I began to experience that everyday things are miracles: an avocado, a frame of honeycomb crowded with bees, a conversation with my son.

Now, I feel more connected to the world around me, and I see that fossil fuels actually stood in the way of realizing those connections. If you take one idea from this article, let it be this: Life without fossil fuels is fun and satisfying, and this is the best reason to change.

But none of these changes had the quantitative impact of quitting flying. By 2013, my annual emissions had fallen well below the global mean.

I experienced a lot of social pressure to fly, so it took me three years to quit. Not flying for vacations was relatively easy. I live in California, and my wife and I love backpacking. We drive on waste vegetable oil, but even normal cars are better than flying. Four people on a plane have 10 to 20 times the climate impact as those same people driving a 25 to 50 mpg car the same distance.

My wife and I drive 2,000 veggie oil miles to Illinois each year to visit our parents. Along the way, we sleep under the stars in the Utah wilderness. This is adventure travel, the opposite of fast travel, and it has deepened my relationship with my parents. After such a journey, I more easily see how precious my time with them is.

Not flying is an ongoing challenge as I progress in my scientific career, but I’m finding that I can thrive by doing good work and making the most of regional conferences and teleconferencing. Not flying does hold back my career to some extent, but I accept this, and I expect the social climate to change as more scientists stop flying. 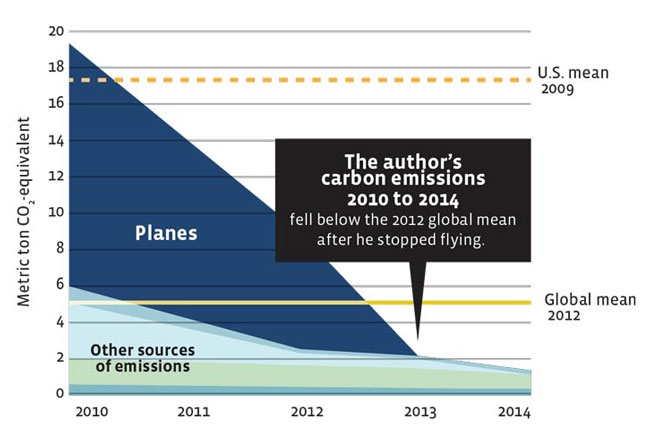 In today’s world, we’re still socially rewarded for burning fossil fuels. We equate frequent flying with success; we rack up our “miles.” This is backward: Burning fossil fuels does real harm to the biosphere, to our children, and to countless generations — and it should, therefore, be regarded as socially unacceptable.

In the post-carbon future, it’s unlikely there will be commercial plane travel on today’s scale. Biofuel is currently the only petroleum substitute suitable for commercial flight. In practice, this means waste vegetable oil, but there isn’t enough to go around. In 2010, the world produced 216 million gallons of jet fuel per day but only about half as much vegetable oil, much of which is eaten; leftover oil from fryers is already in high demand. This suggests that even if we were to squander our limited biofuel on planes, only the ultra-rich would be able to afford them.

Instead, chances are that we’ll live nearer to our friends and loved ones, and we won’t be expected to travel so far for work. Those both seem like good things to me.

With the world population approaching 8 billion, my reduction obviously can’t solve global warming. But by changing ourselves in more than merely incremental ways, I believe we contribute to opening social and political space for large-scale change. We tell a new story by changing how we live.

Dr. Peter Kalmus is an atmospheric scientist at NASA’s Jet Propulsion Laboratory (speaking on his own behalf) and a contributing editor for YES! Magazine. This article draws on material from a forthcoming book about our interconnected ecological predicament. A working draft is available to read here.