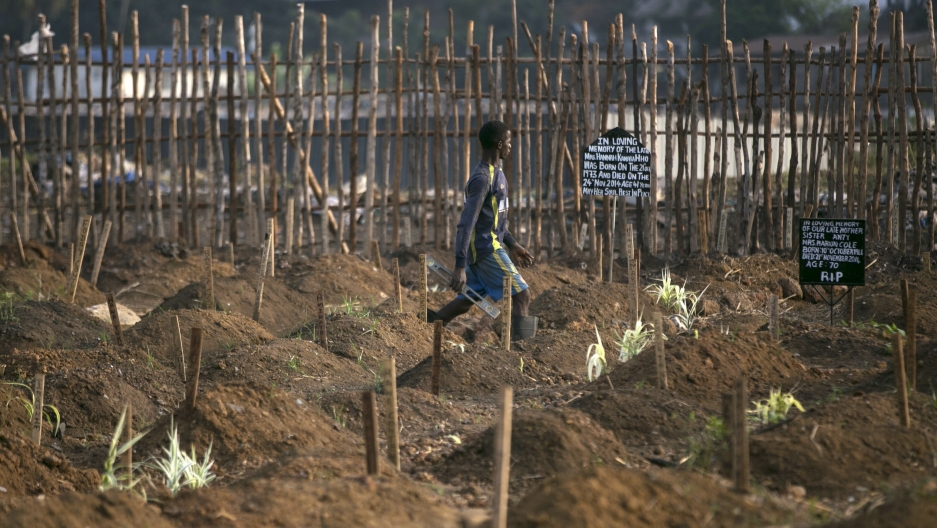 A grave digger walks past fresh graves at a cemetery in Freetown, Sierra Leone.

FREETOWN, Sierra Leone — Salamatu Sheriff’s husband, Osman, was one of the approximately 4,000 Sierra Leoneans who died in the Ebola outbreak that erupted in West Africa two years ago.

In February, she discovered her suffering wasn’t over.

“His grave was opened and robbed of all the ceramic balusters, flowers and other decorations,” said Sheriff, 45, who owns a small shop that sells pens, candles and other assorted wares in John Thorpe village, on the western outskirts of the capital. “We were shocked. This has just brought back all our memories of pain.”

She is not alone. Thieves plundered more than 250 graves in Freetown’s seven cemeteries in January and early February, according to figures released by the city council late last month. The thefts have provoked deep outrage in a nation still healing from the devastation caused by Ebola.

“Why can't they leave the dead to finally rest in peace and undisturbed?” said Sulaiman Zainu-Parker, the city council’s environment and social officer, who added that the thieves likely use pickaxes and sledgehammers in their work. “For thieves to rob graves is a total disgrace to us as a nation.”

The wave of looting is the latest twist in a public health nightmare for Sierra Leone. The World Health Organization, or WHO, declared the country free of Ebola in November. But in January, two new cases surfaced. One victim died; the other survived.

It’s obvious why thieves are targeting graves. Sierra Leoneans, though poor, commonly bury their loved ones with jewelry, fine clothes and other valuable items in addition to spending lavishly on crypt ornaments and caskets.

Impoverished Sierra Leone, Guinea and Liberia — the countries hardest hit by Ebola — struggled to confront the virus with the help of the international community. Now they’re struggling to recover. Around 10,000 people in the region are recuperating from the debilitating virus.

But public health officials have remained vigilant in order to stop new outbreaks. In addition to the dangers posed by isolated flare-ups, Ebola is also present in breast milk and semen after people’s symptoms have improved, according to the WHO.

More from GlobalPost: Love in the time of Ebola: How sex is keeping the outbreak alive

Public health officials said corpses buried for months would not spread Ebola. But they might carry other diseases, especially when grave robbers leave them behind in the open air, said Sidie Yayah, communications director for Sierra Leone’s National Ebola Response Centre.

“When corpses are exposed for whatever reason, it’s an environmental issue and this needs to be addressed,” he said. A health center worker in Lokomasama washes his boots, on November 8, 2014, near Port Loko in Sierra Leone. The biggest chiefdom in Port Loko province has 160,000 people and has been severally hit by the Ebola.

The Kingtom Cemetery has been especially hit by grave robbers, though authorities didn’t provide exact numbers of graves plundered there. Many Ebola victims were laid to rest in Kingtom because public health officials wanted to keep infected corpses in one place lest they transmit the virus. Around 60 percent of the more than 6,000 graves in the cemetery hold both Christian and Muslim Ebola victims.

"The vandals sometimes remove corpses from expensive mahogany and polished coffins, and I suspect the coffins are later sold off to some local undertakers," said Abdul Rahman, the groundskeeper.

Sally Cole, 48, who works in an open-air market, said thieves had stolen her late father’s $1,000 casket.

“We felt unhappy because that casket was carefully decorated with memorable and valuable items like flowers and well-crafted cards,” she said.

Her father died from old age, not Ebola. But that didn’t lessen her sadness when she and other family members visited Kingtom to clean and decorate his crypt before Easter and found a plundered grave.

“It was surreal,” she said. “How can someone steal from a man [who] died two years ago?”

City authorities have placed armed guards at cemeteries throughout the capital and elsewhere. It appears as if they have curbed the looting, at least for now.

“We will continue the surveillance and have also informed other city authorities in other parts of the country to also be on the alert,” said Zainu-Parker.

But police haven’t arrested anyone or suggested they had leads about who might be responsible. That has angered many and led to speculation about who is to blame.

Christopher Coker, a 50-year-old farmer, said many of the items stolen from his brother’s grave in Ascension Town Cemetery, other than his wedding ring, were clearly meant to be buried with a dead person — meaning whoever took them has few options for finding buyers.

“The police need to critically investigate mortuary owners and operators in the country,” said Coker. “They are the only ones who will buy such items because they have the knowledge to reuse them.”

60 Seconds on Earth: Fighting Ebola with a megaphone and motorbike

Sheriff suspected that homeless boys who live in cemeteries and who often earn money by helping to bury the dead were responsible. “They know where renowned figures are buried,” she said, referring to wealthier families.

But Sheka Conteh, 24, a member of a group of young men who call themselves the “Friend of the Dead Youth Club” in Kingtom Cemetery, said he and his cohort were innocent. People are always quick to blame the club for problems, he added.

“This is not about hardship,” he said. “It’s about provoking the dead.”