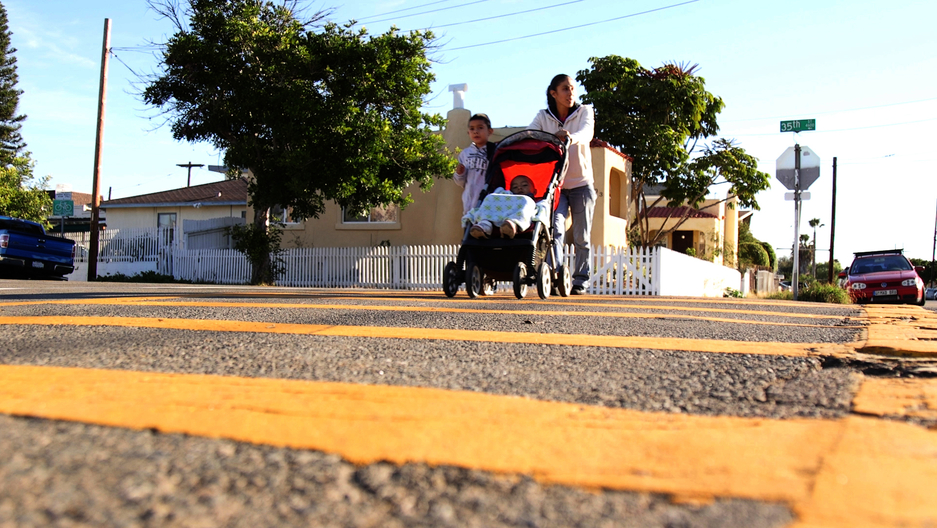 Krystal Ortega and her sons, Aaron and Aiden, walk to Adams Elementary School in San Diego.

Students and parents at Adams Elementary School in San Diego's Normal Heights neighborhood are huddled on the playground around Principal Sylvia McGrade for an early-morning assembly.

"Good morning, Adams Elementary!" McGrade says. The kids shouted their greeting back in unison. They're especially energetic, despite the hour. The end of the month brings a special announcement.

Adams Elementary is in its second year of a joint program with the United Way of San Diego County aimed at improving attendance rates. It places college students majoring in social work on five campuses in the city's Mid-City area to help address the barriers parents face in getting their kids to school on time.

McGrade says she's seen year-on-year increases each month since the program began. But progress has been hard-fought. All of her students are eligible for free lunch. Nearly half are English Language Learners — and for many of their parents, getting their kids to school is easier said than done.

Take a typical morning for the Ortega family. It's two hours before McGrade's assembly and mom Krystal Ortega is already in a rush. She has 15 minutes to get herself and her boys cleaned up and to a city bus stop a few blocks away.

"Good morning, sunshine," she says into a pile of blankets. Tiny cries come from beneath, then grow louder from Aaron, her 5-year-old.

Ortega tries to sound cheery, but it's cold in their tiny hitch trailer.

Adams Elementary is six miles — about a 12-minute drive — from their home, but the maze of bus routes ahead is going to take at least an hour. "From home, we head onto the bus route No. 3. From No. 3, we catch either the orange line or the blue line to Civic Center, and then from there we get the 215 bus to 35th Street. From 35th Street, we walk down to Adams," Ortega says.

The final leg of the trip is familiar — a walk through the neighborhood they used to call home before Ortega split from her husband and had to move farther away from her kids' school, where rent is cheaper.

Ortega, who works part time doing laundry maintenance, says she has tried to keep things consistent for her boys, but the instability has had an effect on their attendance.

Aaron missed a few mornings as they learned the bus system. For her older son Nicholas, the turmoil bled into his grades. Ortega and her ex-husband share custody and she can't always control when Nicholas gets to school. "He went a little below basic because he has to turn in his homework on Fridays and he wasn't here to turn that in," Ortega says.

What kind of students have the lowest graduation rates?
How does ethnicity, identity, financial background or language ability affect graduation rates in public high schools?
Take the quiz.

In October, the Ortegas showed up on Kellie Young's caseload. She is with the United Way's "Every Child, Every Day" program. It's her job to intervene when the district flags students with attendance problems. Young connects families to services that might help.

"Just basic things like lack of food, housing, clean clothes, [health] insurance, transportation," Young says. "Those can all be barriers for parents bringing their children to school."

When Ortega first met Young, she described the stress she's been under and mentioned she misses her old church. Young offered the address of a church near her new home.

"I just wanted ... peace of mind, and keep myself focused," Ortega says. "It's been a long, long, long stressful time."

Young is now helping Ortega hunt for affordable apartments closer to school so it's easier to get her kids to class on time. She's given Ortega a list of potential rentals to check out while Aaron and Nicholas are in class. She's even made a few calls to landlords on behalf of the Ortegas.

All told, the United Way program in San Diego is helping 142 families.

"The parents and teachers are doing the best that they can, but they have a job in the classroom and there are all these things going on outside of the classroom that are preventing kids from being to school on time and being successful," says Shaina Gross, a senior vice president with United Way in San Diego. "So the interns are able to dig into that a little bit and work directly with the families and find out what's going on."

The program is part of the United Way's national effort to boost graduation rates. It also grew out of conversations with educators, parents and nonprofit providers who began meeting about academic achievement under the name City Heights Partnership for Children.

"We know if kids aren’t in school, they can't learn. And if you're not reading at grade level by third grade, then you are four times less likely to graduate high school," Gross says. "That told us that we really need to start in these early grades."

Gross doesn't yet know whether the program is improving academic achievement in the five schools where it operates, but she says attendance at those campuses went from 82 to 88 percent this semester. The goal is to get to 90 percent.

McGrade says the program has been a huge help for her staff. Smaller schools like hers only have a counselor on site once a week. "A parent comes to you on Thursday, so you have to say, 'Uh, can you wait 'til Monday to have that crisis?'" McGrade says. "You really can't."

For Krystal Ortega, the program has given her something to smile about during a difficult time. Standing on the playground for McGrade's assembly, she whistles and claps after hearing the news that Aaron's class ranked first for attendance this month. His reward? Extra recess.