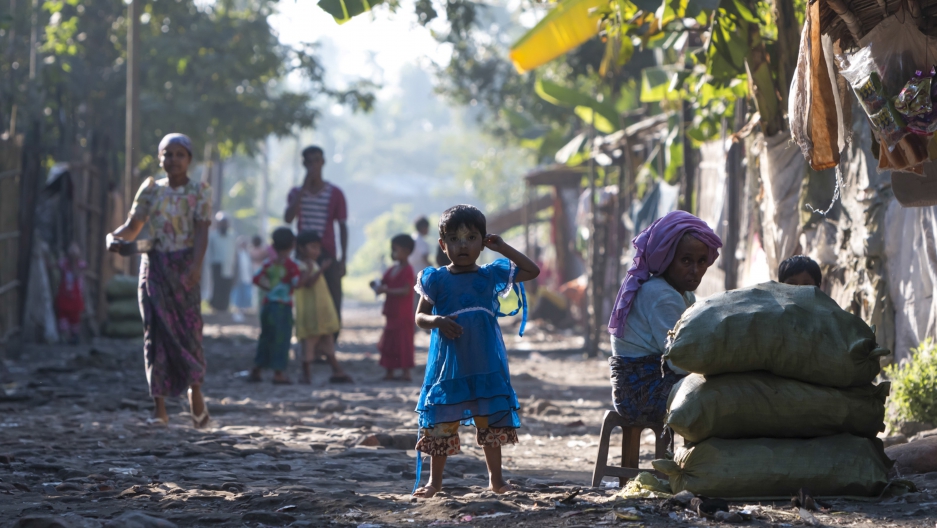 Inside Aung Mingalar, a Rohingya quarter of Sittwe, the capital of Myanmar's Rakhine State. The area, the scene of sectarian riots in June 2012, is now surrounded by checkpoints.
Credit: Adryel Talamantes
Share

SITTWE, Myanmar — Myanmar’s election last November was hailed as the fairest the country had ever seen. The vote sent Aung San Suu Kyi’s National League for Democracy to victory after decades of opposition to the country’s former military leaders. This week Myanmar’s parliament, where the NLD now dominates, will nominate a president to lead a new government.

The democratic successes were tarnished, however, by the fact that hundreds of thousands of Muslims were not allowed to vote. Dozens of Muslim candidates were disqualified from running; of those who did, none were elected.

Now the fate of one of Myanmar’s most vulnerable ethnic groups remains as uncertain as it was before.

More from GlobalPost: The world's other refugee crisis is about to begin, again

Today tens of thousands of Rohingya Muslims live in internment camps along Myanmar’s west coast. Despite generations of history in the country’s Rakhine State, members of the minority are referred to as “Bengalis” by the Buddhist majority, who regard them as illegal immigrants from Bangladesh.

The following photos were taken in several internally displaced person (IDP) camps outside Sittwe in January 2016. “The Rohingya think that the November election was unfair,” according to Saeed al-Arakani, a Rohingya activist living in the Thet Key Pyin camp.

“It was a Rohingya-free election. Rohingya have been participating in political elections for many years, but the November election was a black day in Rohingya history.” A boy walks over a sewage ditch in Sithmagi camp.

“We are not sure whether we will continue staying in the IDP camps,” says David Tin Aung Lay, a student in Thet Key Pyin camp.

“We are facing many difficulties. We don’t want to stay in the IDP camps even a second! We can’t get a good education or good medical treatment, and most of people are jobless. The parents cannot send their children to school.” Jack is a student at Thet Kay Pyin school, the only high school in the camp area.

“My father worked as a driver, but he was killed in 2012 by the Rakhine. In my school my favorite teacher is Mr. Sialogo who teaches math. He is well-liked and respected by many of the students here. My dream is to one day be a teacher like him.” Rohingya children in a day care center in Bumay village, within the IDP zone.

The center is run and funded by a Shan Buddhist man, one of the few Buddhists volunteering to help the Rohingya. Zaw Ye Htut is a doctor from Myanmar’s capital, Naypyidaw, who was assigned by the government to work in the Thet Kay Pyin camp.

“I see about 20 to 40 patients every day. Most complain of aches and pains, but I think they are making up their symptoms in order to receive painkillers, which they sell. The biggest problems I see here are malnutrition and tuberculosis.” Amina was waiting over a weekend in the Thet Kay Pyin clinic, where doctors only come Monday to Friday.

“I did not want to leave my baby to come here, so I brought her with me. She is my third child and was born in the camp. My chest hurts and I do not know why, so I came here and now wait. I am worried that my child will get sick here but there is no other way.” Mostauhadu lives in the Sithmagi camp. Limited facilities within the camps and restrictions on travel outside them have left thousands of Rohingya without access to basic healthcare. People are dying unnecessarily as a result, according to aid organizations, including pregnant women who cannot deliver safely.

“I was pregnant but the baby died,” Mostauhadu said. “This is the second time I have lost a child before giving birth. Because of this I have been suffering from complications and bleeding.” Men bring fish from the day’s catch in Theychung village, the only area within the camps where fishing is allowed.

The restrictions on fishing have contributed to food shortages among camp residents. Sethera, a 16-year-old Rohingya girl, suffers from mobility problems due to manutrition.

She has not been able to leave her family's hut in the Theychung IDP camp for one year. “It has been long time since the 2015 election finished,” says David Tin Aung Lay.

“Many Rakhine from Rakhine State demonstrated not to let us vote. Aung San Suu Kyi made a promise to the public to maintain peace and harmony in Myanmar. If we had got the opportunity to vote, we would have voted for NLD, but we didn't get it, and we couldn’t vote for it because they said that we aren’t citizens.” “The Rohingya think that Suu Kyi will help them — she will help us achieve free movement, basic human rights, and resettlement at the very least,” says Saeed al-Arakani. “If the Rohingya could have voted, they would have voted for the NLD because it is their best hope.

“The NLD has not formed its government yet, so it hasn’t said or done anything about the Rohingya. The current military government is the enemy of the Rohingya… They are just trying to enforce ethnic cleansing on the Rohingya.” A mosque that was attacked during the 2012 riots. Located in central Sittwe, the mosque is outside the camp area and therefore out of bounds for Rohingya due to restrictions on their movements.

“I can surely say that we are country-less and have no chance to act freely,” says David Tin Aung Lay. “We want our original land, villages, freedoms, and equal rights.”