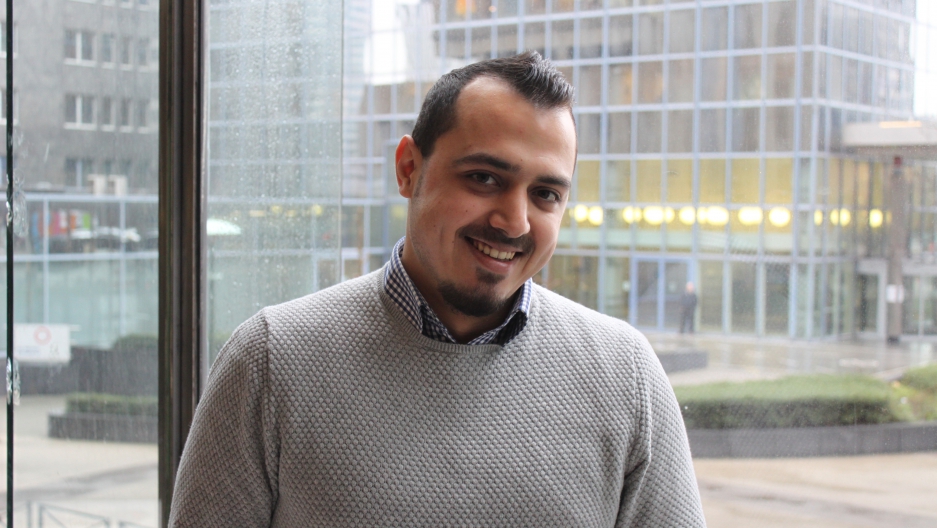 Youssef Kamand in Brussels. He's from Syria and just won asylum in Belgium.

But reality is also sinking in. It’s time to find housing, work and figure out how to pursue his education and his dreams. And first he must overcome some misconceptions.

“They think we are poor people and don’t have anything,” he says. “Actually the Syrian people have an education, they have businesses, their kids are in school, their wives are working, like normal families. I guess they think we came from the desert, but before the war my brothers and I wanted to finish our educations, and go to other countries for PhDs.”

He graduated from university last year. When he left home last September, he was about to be conscripted into the military.

“In Syria, when young men finish school or college, they are usually given three months until they come to the house and take them and force them into the military,” he tells me. “So I made it out before those three months.”

He knew he didn’t want to fight.

“It’s not about going to fight for my country,” he says. “It’s about they are killing innocent people on both sides and I don’t want to be any part of that.”

At the border, the guards taunted him, asking if he was running from the military.

“It was a little humiliating,” he says. “We said we were going to Lebanon and we would come back. If you say you’re going to Europe, they will grab you.”

His original plan was to try to find work in Turkey. But when he got there, there was no system for dealing with refugees like him.

“They didn’t give us anything. No procedures, no nothing,” he says. He met up with some friends there and they decided to head for Belgium.

And so began the trek across Europe we’ve heard so much about, starting with the terrifying journey across the Aegean Sea to Greece, 50 people crowded into a rubber boat built for half that load.

“It was totally dark, only the moon showing us the way,” he remembers. “All the women were crying. Even the men were crying. Men don’t usually cry for this danger but they were crying for their children. They were scared for them.”

They landed on the island of Farmakonisi first, and then took a ferry to Leros, where authorities registered them and they were allowed to travel on to the mainland. There they started walking. It’s striking, talking to Kamand, how blurry much of the journey seems to him now.

“Do you believe that I can’t remember which city, which country, came first,” he says. “I don’t know where I am. I’m just walking.”

“It was hardest in Germany,” he says. “I keep saying to all the police and everyone I see that I want to go to Belgium.

"I said, ‘We have women and children. Let the bus that took us here just take us to the train station.’

The group spent the rest of the night on a cold, confusing odyssey by foot and taxi to the nearest train station. Youssef still thinks often of a teenage boy they encountered, out late riding his bike and listening to music, who helped them find their way.

The next day he was on a train to Belgium and his new life. He arrived on October 15, 30 days after he left his home in Syria. Four months later, on February 15, he got notice his claim for asylum had been approved. He’s relieved but also stressed about finding a place to live.

“I won’t get anything, no ID card, not bank account, not even my monthly payment, until I find a house,” he tells me. “I have to sign a contract and then I will get money each month.”

The day I meet Kamand, he has traveled three hours by train to meet me. I get a sense of the isolation and boredom he must feel back where's living now, in the cramped quarters of the government-run shelter.

“I keep all day and all night on my telephone and my laptop, searching for scholarships, universities, housing,” he says.

His plan is to go back to school to do a master’s degree in architecture.

“I’m ready to start all over again if they do not accept my degree,” he says.

As a student he had his own graphics company, teaching people how to use software like AutoCAD and Photoshop, and coaching applicants on entrance exams for degree programs in fine arts and architecture. He used his profits to finance his journey to Belgium, which cost him $2,750.

What if the war ends, I ask him. Would he go back?

Maybe, he says. But he thinks it’s more likely he’d stay in Belgium. It’s hard for him to imagine an end to the war.

“Even if it ends, the bad feelings that people have will never end.”