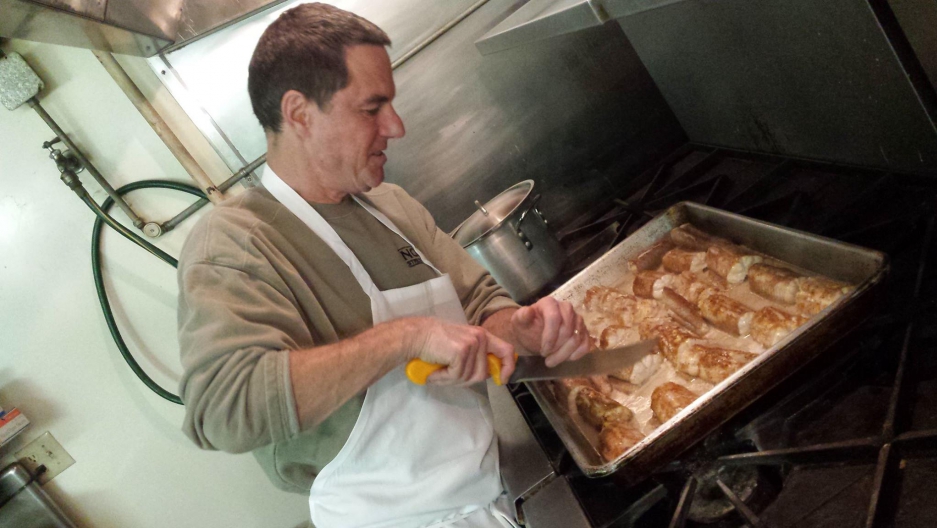 Seasoned dogfish steaks are cooked up in a seafood-infused tomato sauce.

Dogfish, aka spiny dogfish, dogfish shark, or Cape shark is small species of shark caught commercially along the Eastern Seaboard, from Maine to North Carolina. On Cape Cod, it’s relatively easy to catch using longline or gillnets within 10 miles of Chatham, Mass.

“In the summertime we find the dogfish literally as soon as we fall outside the harbour," says Nick Muto, a Cape Cod fisherman, and a member of board of directors for the Cape Cod Commercial Fishermen's Alliance. "We have miles of dogfish.”

Dogfish has become abundant in the waters off New England, and codfish has all but disappeared due to the confluence of warming oceans, says Muto.

“But out of that has risen this emerging dogfish fishery that has become a real building block of our harbor.”

Abundant it may be. But Americans aren’t yet buying it.

It might be an image problem. Or maybe the name "dogfish" is enough to turn seafood consumers away. Maybe it’s the taste.

Whatever it is, the abundant fish has been seen in the US as a lower-valued species — “trash fish” — so that much of the catch is exported overseas.

Now some New England fishermen, chefs, and food sellers are teaming up to create a buzz around dogfish, to “rebrand it,” and present tasty dogfish recipes and economic arguments to help boost the ill-named white fish to help it compete with the big five: tuna, cod, swordfish, haddock and salmon.

“I don’t want to mislead anybody,” says Muto, “It’s not codfish, but it could be a good substitute. It’s a nice flaky, white fish, and very tasty."

To make the case, the Fisherman’s Alliance likes to serve up samples of dogfish. At the Seafood Expo, Muto says it was on the lunch menu.

“We had some smoked dogfish beignets, which were unbelievable," he says, "with a red pepper aioli. We had it fried, and we had it pan-seared over some wild rice, and they were all fantastic.”

But so far it’s an uphill battle. Currently, the alliance says most dogfish is trucked to New Bedford, Mass., for processing and the fillets are exported to the UK for fish and chips, as well as to Germany, France and Italy. The fins and tails go to Asia.

Meanwhile, to satisfy consumer demand for haddock and cod, New England imports heavily from Iceland and Norway. So the future of the New England fishing fleet may depend on reversing that economic imbalance, says Muto.

“If we can bolster this [American] market a little, even by 10 to 20 percent, I feel it would serve as a foundation for the fishing businesses in our harbor," Muto says. "We’re very fortunate that there is such a great stock right outside of Chatham so I don’t have to go very far to catch them, and it’s become a nice part of my yearly business. So hopefully we can create awareness and create a demand for dogfish and allow for us to continue to be on the water.”