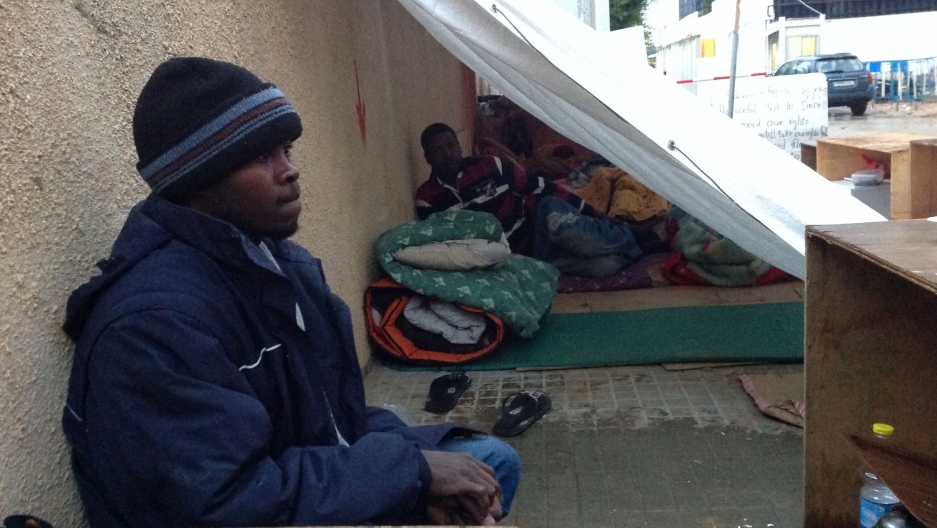 Abdallah Abu-Bakr Al-Ghazouli fled Darfur in 2007. He's tried to get refugee status in Lebanon since. Now he and some other Sudanese asylum seekers are camping out 100 feet from the UNHCR office in Beirut.

Abdallah Abu-Bakr Al-Ghazouli lives in Beirut now, but he grew up in Sudan.

Al-Ghazouli grew tomatoes and wheat. He raised cows and goats. But in 2003, when he turned 17, the farm where he lived and worked — in the Darfur region — became a warzone.

“It was a mass extinction ... a mass genocide from the Sudanese government to the sons and daughters of Darfur,” he says.

Bombs scorched farmland and houses were burned to the ground. People fled and lost track of one another. Al-Ghazouli held on in Darfur until 2007, but it became too dangerous. So he left, traveling through Syria to Lebanon.

“Some friends of mine told me there was a refugee office for people just like me who had come from Darfur, and they would help me and protect me,” Al-Ghazouli says. “I felt really hopeful.”

Al-Ghazouli is referring to the UNHCR, the United Nations refugee agency. He went and applied for refugee status, which he needed to get asylum abroad. He had five interviews over nine months.

“The ninth month, they rejected me as a refugee,” he says. 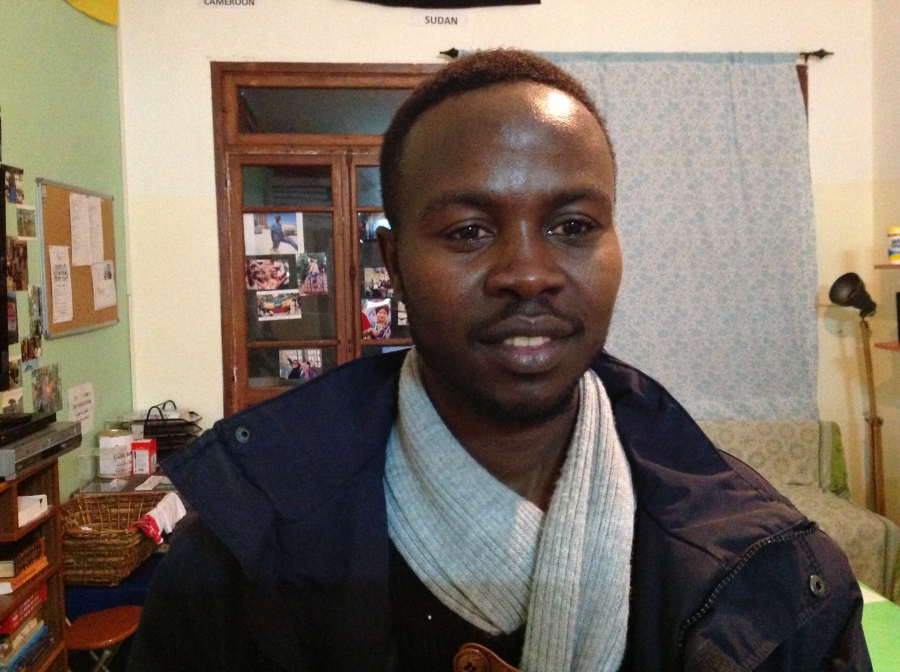 Abdallah Abu-Bakr Al-Ghazouli as been trying to get refugee status for nearly a decade. It's looking less and less likely.

He's not the only one who has been turned down. Hashim Musah is also Sudanese, though not from Darfur, and came to Lebanon seeking refugee status too.

“The UN office has offered me nothing,” Musah says.

The UNHCR told Musah his asylum application was denied because he could return to his part of Sudan safely. 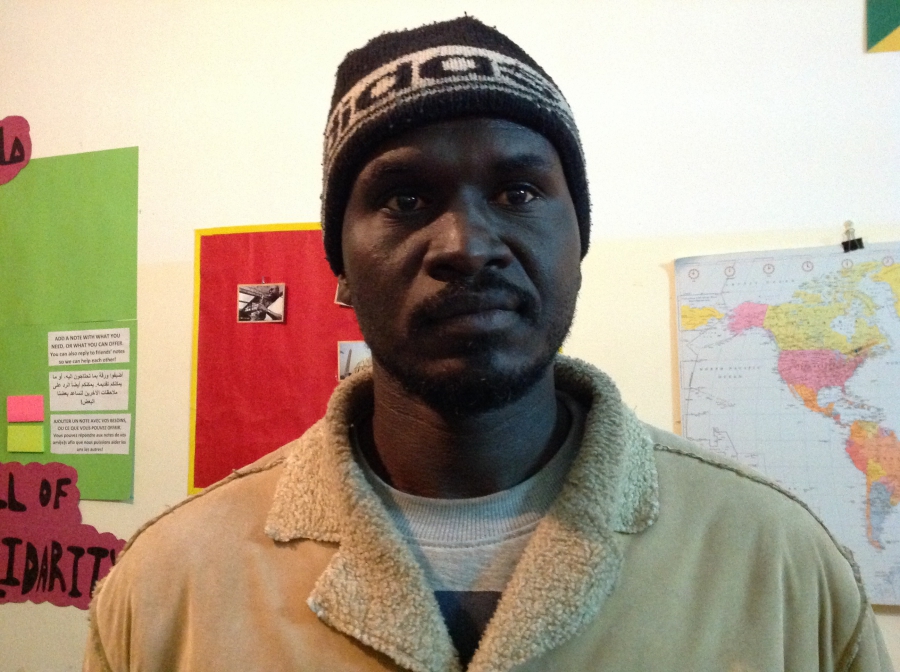 Hashim Musah says he was turned down for refugee status because the UNHCR said he could return safely to his part of Sudan.

This situation prompted Al-Ghazouli, Musah and a handful of other Sudanese refugees to organize a peaceful sit-in last summer in front of the UNHCR building in Beirut.

Al-Ghazouli says this kind of protest has succeeded in getting people resettled before. But this time, it was different. The protesters say any open files were closed. Al-Ghazouli says some people were deported. And in October, he says, a security team forcibly moved the protesters away from the entrance.

“One person held my hands back, one person hit me in the stomach and they threw me over a metal gate,” Al-Ghazouli explains.

Musah pulls up his pant leg to reveal a scar on his knee the size of a quarter.

“Five people had jumped at me — one put me in a chokehold,” Musah says. “As they were pulling me out, I fell on my knees and that’s how I hurt my knee. To this day, I limp. I am shocked because this is the UN, where they are supposed to take care of refugees.”

Dana Sleiman, the public information officer for UNHCR Lebanon, says her office had nothing to do with the attacks.

“Of course this would be bad practice that needs to be punished,” she says. “We’re a humanitarian agency at the end of the day.”

Sleiman says her agency’s mission is to take care of those who qualify as refugees but the demands are extreme. Lebanon is already host to a million displaced Syrians and some 2,200 Sudanese, by her count.

“Sudanese people in general in Lebanon have legitimate concerns and legitimate frustrations,” she says. “We do appreciate the hardship that they’re going through.”

But she says not everyone can be resettled. In fact, the UNHCR says that fewer than one percent of refugees worldwide end up getting officially resettled. Still, Sleiman says her office has sat down with everyone from Sudan to tell them about Lebanese agencies that can offer help. And she supports their sit-in: “I think it’s important that they be heard.” 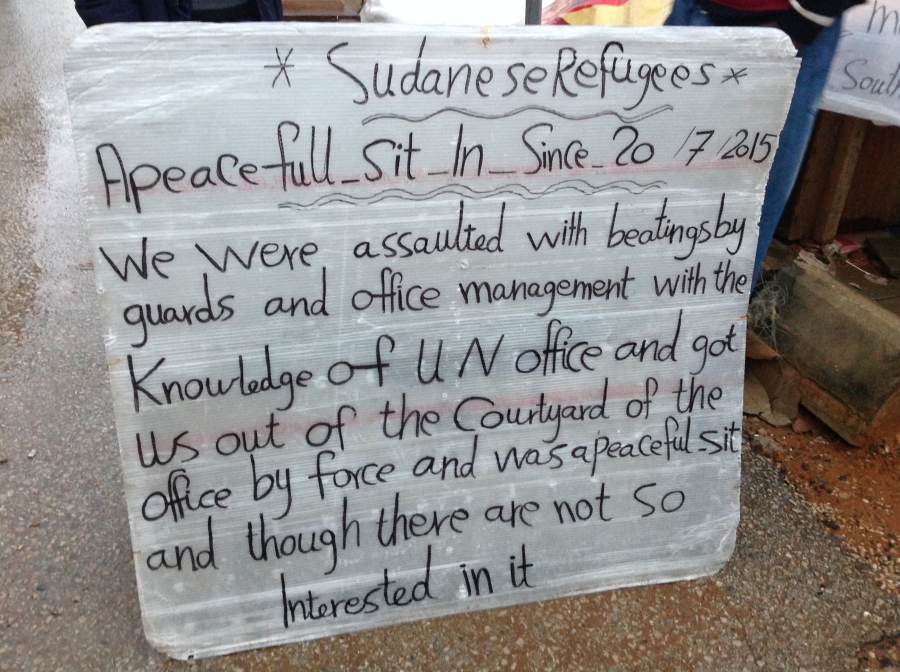 Sudanese asylum seekers say they were attacked during a peaceful protest in front of the offices of the UNHCR in Beirut. The UNCHR says they had no knowledge of what happened.

On a wet evening, a hundred feet or so from the UNHCR office, along an alley, Al-Ghazouli, Musah, and two other Sudanese protesters stand in the drizzle.

Below a tarp, the protesters have lined the sidewalk with cardboard. A series of sleeping bags are carefully arranged.

Abu-Bakr says there are eight people living here on the street, including women and children. A cold, wet wind blows against the tarp. It will be dark soon.

Al-Ghazouli says the eyes of much of the world are on Syrian refugees. They are the ones receiving priority, even though the Sudanese have been asking for asylum for a decade. He says that is when you realize that not all refugees are the same.