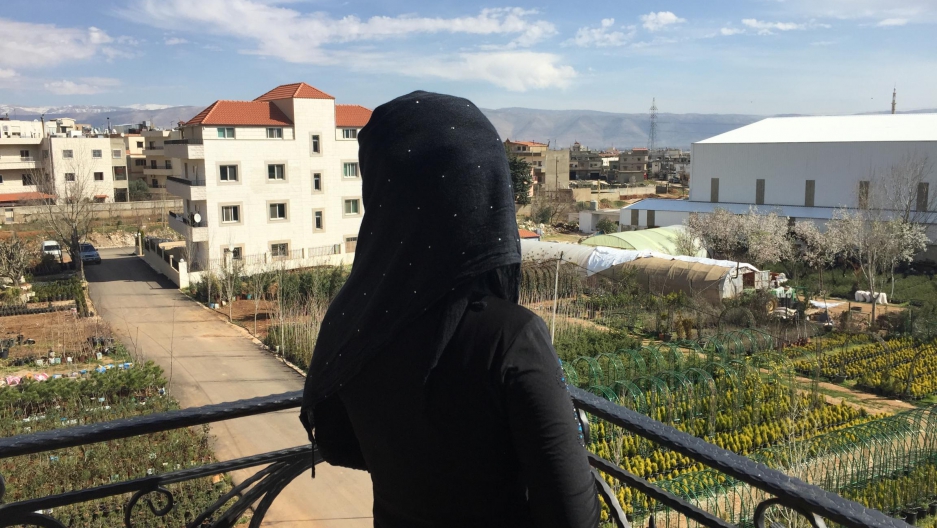 Amira, who married at 16, says she faced severe abuse at the hands of her husband and found it difficult to escape.

The day before her wedding, Amira’s fiance took her aside in a quiet moment and told her he had loved her since he first saw her.

“He said he would give me anything I wanted. He told me he would provide for me,” she says. “One week later was the first time he hit me.”

Amira, a refugee from northern Syria, was just 16 when she was married in a religious ceremony in Lebanon. Her husband was 20.

Child marriage is relatively rare here (around 13 percent of Lebanese women were married before the age of 18, according to a recent study — experts say most of them are from the older generation), but the practice is seeing a resurgence among Syrian refugees fleeing the war next door.

For many parents it is a desperate measure sought in extreme circumstances. Large numbers of Syrians are living in harsh conditions in informal camps, unable to provide for their families — so they marry off their daughters to husbands who can. For others, it is to find stability when they are far from home and surrounded by chaos.

"For Syrian refugees who are increasingly in debt and struggling to survive, marrying their daughter off can be seen as the best way to provide for her," says Caroline Anning, Humanitarian Media Manager at Save the Children. "With limited job and education opportunities for Syrians, girls often don't see themselves as having much of a future either."

With no official refugee camps in Lebanon, exact numbers are hard to come by, but organizations that work on the issue say the problem is worsening in the Syrian community. A study by Beirut’s Saint Joseph University last year found that some 23 percent of Syrian women currently in Lebanon were married before the age of 18. Among Syrian girls ages 12 to 17 today, 4,454 were married before they reached adulthood, which is equivalent to 6.3 percent. It’s happening elsewhere with large refugee populations. In Jordan, home to the third largest refugee population after Turkey and Lebanon, registered marriages in the Syrian refugee community involving a girl under the age of 18 have risen from 12 percent in 2011 to just under 32 percent in 2014.

‘He told me he would make me hate my life’

Amira escaped to Lebanon with her family from Qamishli in northeast Syria two years ago. She lived with her parents and brothers in a makeshift shelter in the town of Qab Elias, not far from the border.

When her husband came to her shelter with his father to ask for Amira’s hand in marriage, she was delighted. She thought she was beginning a new life — but what she says followed was a cycle of abuse that her age and her circumstances made her ill-equipped to escape.

Staring at the glass beads on her shoes, stained with mud from the scrub of land where her family built their temporary home, Amira recounts the punishment she suffered.

“He beat me morning and night. He told me he would make me hate my life,” she says quietly. “I wanted to see my parents but he wouldn’t let me.”

This staged video from advocacy group Kafa seeks to draw attention to the issue of child marriage in Lebanon, and force a change in the law.

The beatings and bullying continued. On one occasion, when the couple were on the way to a relative’s wedding, Amira’s husband pushed her from the motorbike they were riding. She told her family that she had fallen over. Later on, her husband accused her of having an affair with his father — her father-in-law — a lie that led to strangers in the informal camp in which they lived questioning and reproaching her.

The violence Amira faced is by no means a problem exclusive to girls who marry, but there is little doubt that her age prolonged the abuse. A confluence of societal, religious and family pressure on a teenage girl can be a powerful thing.

The whole time she was being abused, Amira thought back to the proposal. Her father had told her she was too young, but she persisted. “He said, ‘If you do this you will have to accept anything, because it is your choice.’ I was not old enough to make that decision.”

Amira said she felt she couldn’t leave her husband because of what her father had said.

There was another reason, too. After a while, it became clear that Amira’s husband was trying to force her to leave. He would bring another girl into the house, calling her his girlfriend, and tell Amira not to look at her. He told her he would agree to a divorce, but only if she agreed to relinquish her right to the “mouakhar” — a payment mandated under Sharia law that a husband gives to his wife. After all she had been through, Amira was unwilling to let go of this right.

Girls who marry young are not only more vulnerable to domestic violence, but also face a host of societal and life-threatening health consequences. Complications during pregnancy and childbirth are the second highest cause of death globally for girls ages 15 to 19, according to the World Health Organization. It can also be deadly for the children they bear: Infant mortality rates are substantially higher for babies born to adolescent girls than for those born to women ages 20 to 24. Young brides' educational opportunities disappear and social interaction with others their own age is limited.

Those campaigning to eradicate child marriage say ignorance of these morbid realities sustains the practice, and so raising awareness is extremely important.

Kafa (“enough” in Arabic), an organization on the front line of the fight against child marriage, brought the issue to global attention last month when a video they produced went viral.

The video shows a 12-year-old girl having her wedding pictures taken by the sea with a man old enough to be her grandfather. One passer-by calls the groom a “criminal,” to which he replies: “This is none of your business. I got permission from her parents.”

The participants in the video (above) were actors hired by Kafa for the campaign — which is pressing for a change in Lebanon’s laws to allow civil oversight of religious marriages in the hope that a minimum age can be introduced.

Although Lebanon is a signatory to the UN's 1989 Convention on the Rights of the Child (CRC), which deems a child as any person below the age of 18 for the purpose of civil obligations and contracts, all family-related issues here are governed by religious law. And all of the many religious sects in Lebanon permit marriage before the age of 18, while some Muslim communities allow for girls to marry as young as 9 years old with parental permission.

The campaign was aimed at an international audience, but Kafa also works with young girls on the ground in camps and schools in rural Lebanon.

“One of the things we ask the girls to do is imagine what a marriage between a 28-year-old man and a 13-year-old girl would be like,” says Maram Nabhani, a case manager for Kafa in the Bekaa Valley, eastern Lebanon. “What kind of activities they will do together, and so on.”

Kafa calls them “awareness workshops,” and aims to persuade parents and children alike to consider the dangers of marrying so young.

“We teach them about the physical and social differences [between a young girl and a man]. We say that women have these roles in society, but these are roles created by society.”

Not long after Kafa’s video was released in December, and a little before it went viral, Amira approached one of the organization’s outreach workers during a session in her camp. She told them her story, and they agreed to provide her with a lawyer to seek a divorce from her husband and get the money she is owed.

The case is currently in court. Her husband failed to turn up for the last session; the next one is his last chance.

Amira stops several times while recounting her story to cry, but is resolute in her wish to tell it. Now 17, and living with her parents again, she speaks like a woman much older, wondering what her life would have been like if the war hadn’t torn her country apart.

“If the situation was different this wouldn’t have happened,” she says.

She doesn’t know what her future holds, but she is certain of one thing: “I will not get married again.”