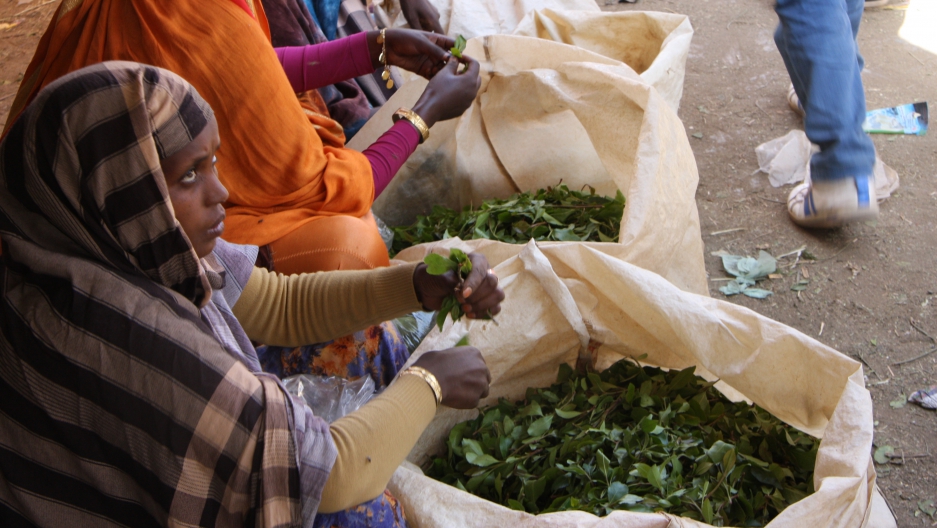 A truck screams past our minibus and pulls away with seemingly impossible momentum over the rough road through the Somaliland desert.

“He’s got khat from Ethiopia to deliver in Berbera,” the man next to me says. “He’s got a few hours to get it there fresh, so it can sell for a better price. If we tried to keep up with him you’d be scared.”

During the next few days, wandering around the old maritime town of Berbera on the Somaliland coast during the afternoon, I seem to be the only male not holding a bundle of stalks sprouting oval-shaped shiny green leaves wrapped in a thin plastic bag.

Understanding khat — or as it is also known and spelled, jima, mira, qat, chat and cat — is far from straightforward. Its leaves when chewed act as a psychotropic stimulant. But one only has to take an experimental munch on a couple of bitter leaves to be left wondering what all the fuss is about.

Because there is a lot of fuss. This innocuous-looking plant has experts variously claiming it is as mild as tea or as addictive as cocaine, and in Horn of Africa countries khat wields an enormous economic impact, as well as playing a major social and cultural role.

In Western countries, on the other hand, khat has increasingly fallen foul of legislators’ suspicions. Most recently it was banned in the UK in 2014 — despite the recommendation of the Advisory Council on Misuse of Drugs not to ban it — leaving some in diaspora communities complaining, others relieved, and African khat exporters in despair at losing lucrative foreign markets.

On a hot afternoon in the Somaliland capital Hargeisa, however, you won’t find much khat-related disagreement.

“It brings people together, it facilitates discussion of issues and exchanging information,” says local journalist Abdul, the corners of his mouth speckled with green mush. “In the West it’s often difficult for people to interact, but here they learn about their neighbors and what problems they have.” It’s estimated 90 percent of the adult male Somaliland population chews khat for "mirqaan," the Somali word for the buzz it can give.

Nowadays khat is so enmeshed with Somaliland culture and daily life it’s become an important tax earner for the government. In 2014, khat sales generated 20 percent of the $152 million budget, according to the Ministry of Finance.

For Ethiopia, khat is a major earner too: even Somaliland spends $524 million a year, about 30 percent of gross domestic product, on Ethiopian khat.

Another of Ethiopia’s eastern neighbors is a keen customer: Djibouti. From those shores, some contend, dhows loaded with Ethiopian khat once set out for Yemen, where it now grows in abundance with an equally significant economic, social and cultural impact. Across the border in Saudi Arabia, however, khat is vilified.

Much of Ethiopia’s prime khat grows in the hills around the prominent eastern cities of Dire Dawa and Harar, about 150 km from the border with Somaliland.

What isn’t sent off by truck or plane to neighboring countries and farther afield finds an eager Ethiopian customer base in the likes of Dire Dawa’s Chattara market, where sellers are predominantly women who haggle passionately.

Khat has a long history in the Horn of Africa and surrounding region. Its leaves were viewed as sacred by the ancient Egyptians, while Sufi religious men chewed khat to remain awake during nocturnal meditations on the Koran — hence the leaf's affiliation with the divine.

Now khat exists very much in the mainstream.

“It’s better than alcohol as you can still function normally afterwards,” says Abdul, who chews whenever he is on deadline. “It affects people differently, it depends on your personality: After khat some like to read, others to work.”

Among the 10 percent of Somaliland men not chewing khat, however, opinion can differ.

“I don’t chew as I know the effects,” says 24-year-old university lecturer Abdukarim at a busy Hargeisa coffee shop. “Initially you feel happy, confident, strong and high. The problem is the result. At the end you are weak. It should be banned.”

​“To really understand khat you have to chew it,” says Nafyar, sitting near Abdul in a group that starts with about five but continues to grow during the afternoon khat session full of animated banter and conversation.

In Ethiopia’s capital, Addis Ababa, the government has prevaricated over how to legislate khat. Currently it is perfectly legal to buy it and take it to your home to chew, but it’s illegal to gather with others for a communal chew in a khat house.

However, as I was shown to one of a number of mattresses encircling the floor of a room to talk to people chewing khat and smoking shishas, I was reassured the Addis Ababa police virtually never bother to enforce the rule.

A man picks khat leaves during an afternoon khat session in the Somaliland capital, Hargeisa.

In Hargeisa, I was told the Somaliland government wouldn’t dare enforce a ban due to the amounts of money and vested interests involved, although there are those who want to see it done.

“The problem comes down to the man not being part of the family and the woman being left to do everything,” says Fatima Saeed, a political advisor to the opposition Wadani Party, who previously worked for 15 years with the United Nations. “Men sit for hours chewing — it’s very addictive.”

She highlighted other potential consequences: “It can bring about hallucinations, sleeplessness, loss of appetite, deaden sexual urges, while in others it increases them.”

Others point out the flip side of the supposed economic windfall.

“Khat is a massive burden on Somaliland’s fragile economy since it means that a large percentage of its foreign currency is used to purchase khat,” says Rakiya Omaar with Horizon Institute, a Somaliland consultancy firm helping communities transition from underdevelopment to resilience and stability.

Saeed supported the 2014 khat ban implemented in the UK, she says, due to the negative impact khat was having on the Somali diaspora community there.

“Khat would arrive at 5 p.m. on the plane and by 6 p.m. men had left homes and wouldn’t return until 6 a.m.,” Saeed says. “After the ban it was like people woke up from a deep sleep — they started looking for jobs, being part of the family.”

This story was reported from Somaliland, Ethiopia and Djibouti.