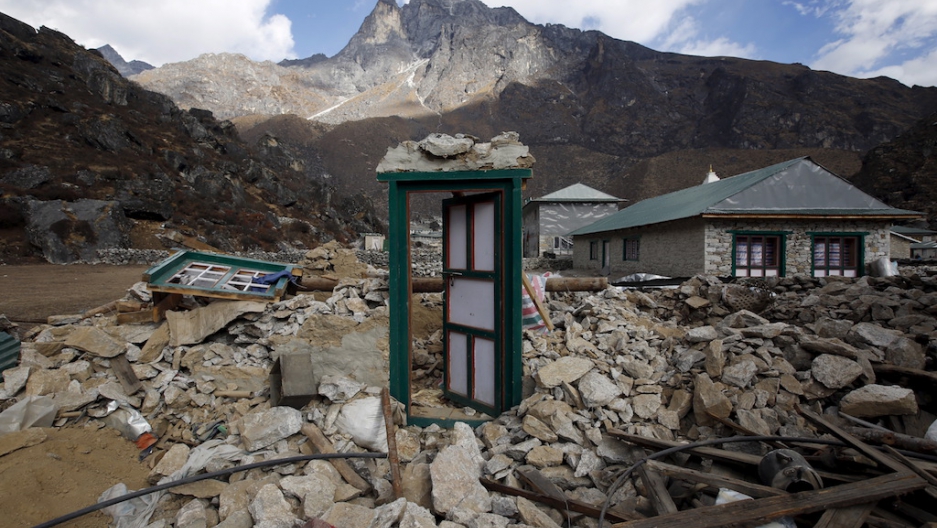 More than 10 months after devastating earthquakes rocked Nepal and claimed the lives of nearly 9,000, the government has yet to rebuild.

Though volunteers and NGOs responded rapidly to the April quake and its May aftershock, the official reconstruction process has languished — to the extent that Nepal’s government has not utilized any of the $4.1 billion pledged by other countries, the United Nations, the World Bank and other international agencies to help provide long-term relief. For now, this money remains with the donors, who are still awaiting the Nepali government’s reconstruction plans.

Reconstruction is sorely needed. By the government’s count, the 2015 earthquakes damaged nearly 900,000 houses, over 900 health facilities, and more than 8,300 schools.

According to the Shelter Cluster, a Red Cross-led partnership that is coordinating relief efforts, by November only 5 percent of households in the worst-affected areas had been fully repaired or rebuilt. Half of them were in the same condition as they were immediately after the quakes. 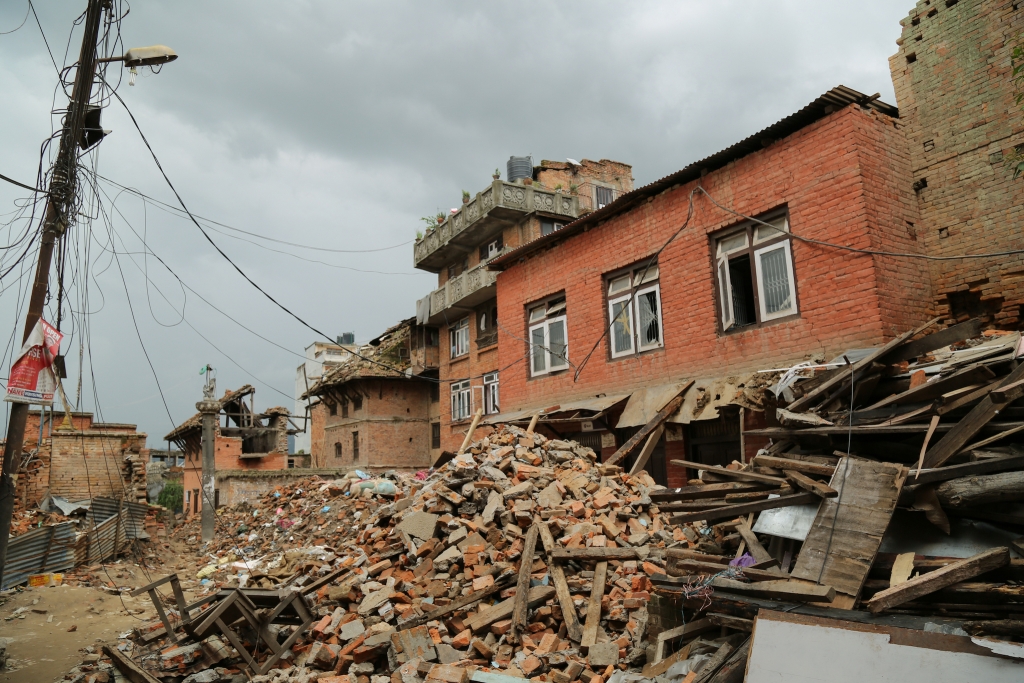 Bhaktapur, a city in the Kathmandu Valley, July 2015.

Delayed response has also led to large-scale waste of donated food. In December it was found that large quantities of the tens of thousands of tons of rice provided by international donors had not been distributed, but stored in warehouses where it was photographed rotting and infested with insects.

To prevent further waste, in January the government announced plans to begin selling rice that had been donated for earthquake victims.

“We have 26,000 metric tons of rice in storage, and because there has been no demand from the earthquake-affected areas, it will be best to sell the rice so that we can convert these donations into funds,” said Shree Mani Khanal, a spokesman for the Nepal Food Corporation (NFC), the government agency responsible for managing food donations.

According to Khanal, money from the sale of donated rice will be redistributed into disaster-relief funds to be used in future crises.

If the NFC has seen “no demand” for rice, it’s not because Nepalis don’t need it. More than a quarter of Nepal’s population lived below the national poverty line even before the earthquakes. Instead, administrative hurdles and political wrangling have stalled the distribution of even basic aid. 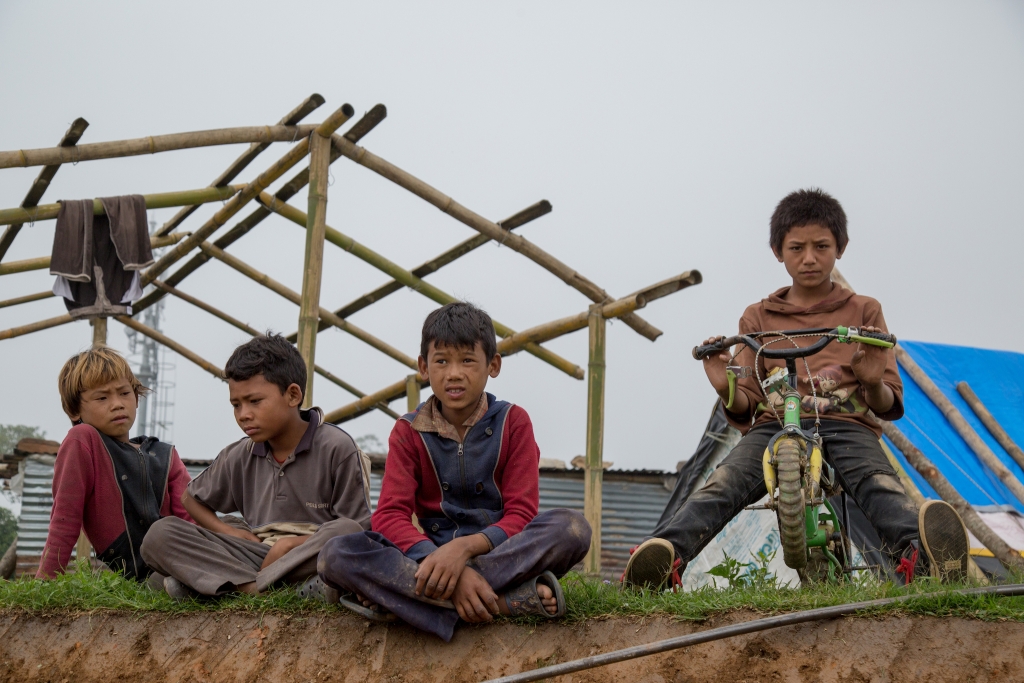 It was only in December — nearly eight months after the first quake struck — that the Nepal government formally created the National Reconstruction Authority (NRA), the body in charge of spending international donations, due largely to political squabbling over who would lead it. Since then, the NRA has struggled to agree on even a logo.

“Currently, we are in the process of conducting surveys and determining a plan to implement in the villages,” Madhu Sudan Adhikari, acting secretary of the NRA, told GlobalPost. He stated that the Nepal government was busy with “internal documentation” and had yet to work out “memorandums of understanding.”

“Reconstruction is still in the planning stages,” he said. 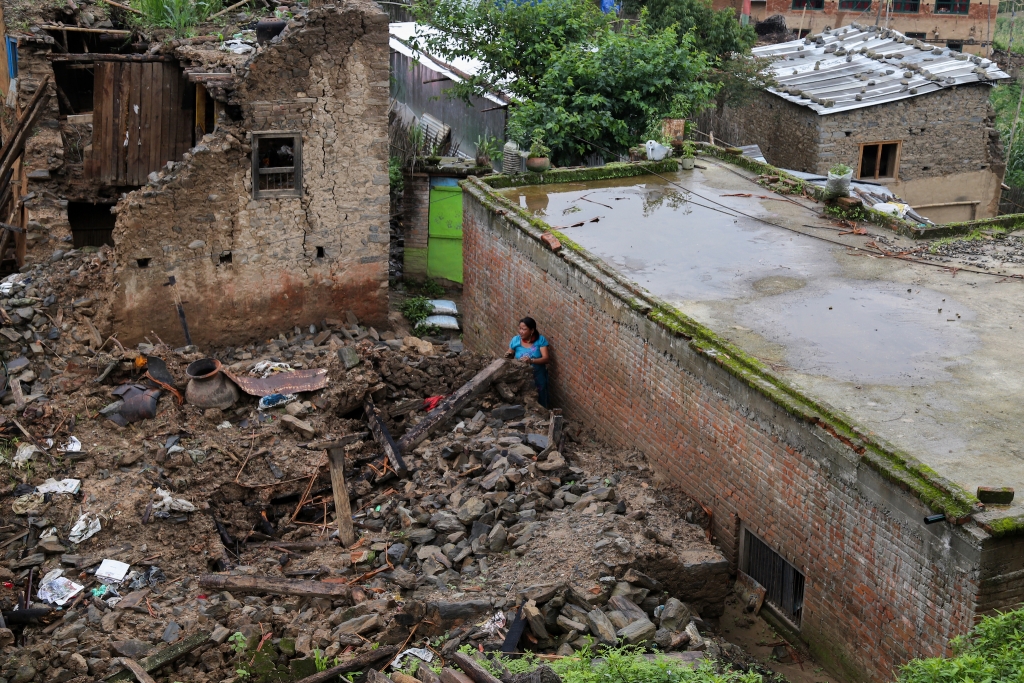 Part of the reason the Nepal government has taken so long to act is that it prioritized promulgating a new constitution over providing relief.

Having struggled for years to formulate a constitution to replace the interim one introduced in the wake of Nepal’s civil war, after the earthquakes the leading parties agreed to fast-track a new constitution in just a few months.

More from GlobalPost: How aid for Nepal fell short amid concerns of corruption

Adopted on Sept. 20, the constitution was widely criticized for ignoring marginalized communities and deepening disparities. Discontent flared into protests, culminating in a massive blockade along the Indian border that would evolve into a protracted national crisis and further hamper recovery efforts.

Essential supplies such as vaccines for infants became critically scarce in many areas and many villages still face shortages of medicines. Some continue to eke out the supplies that were distributed as earthquake relief last year. 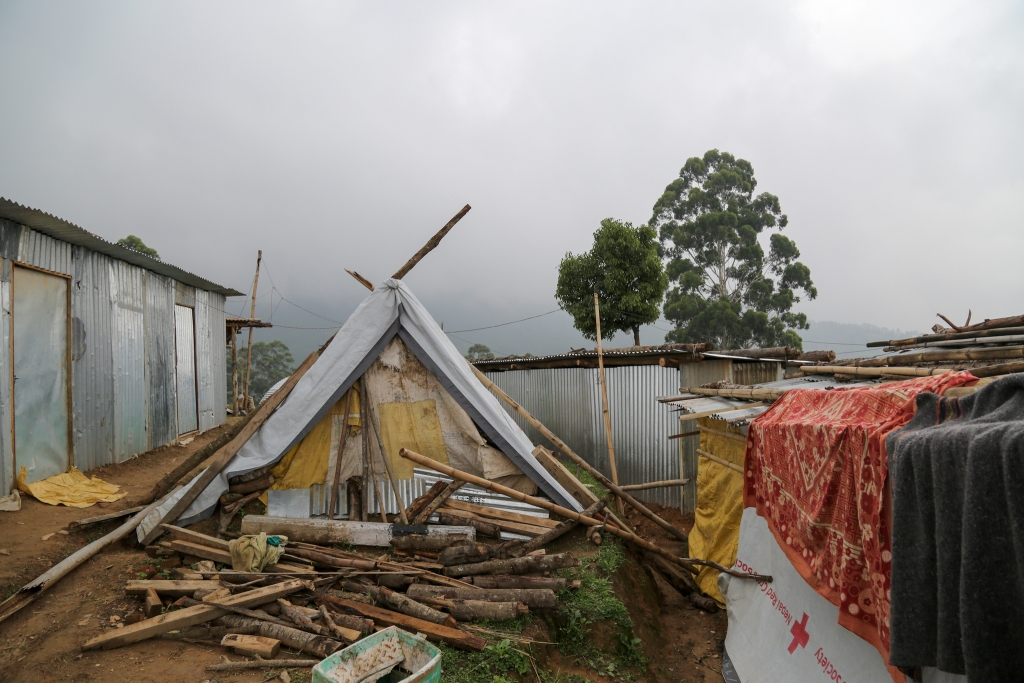 “A lot of people are still living in tents and under temporary shelters built out of sheets of metal,” says Sumana Shrestha, a Kathmandu resident involved in private initiatives to bring aid to affected areas.

“People have literally fallen dead this winter going outside of these shelters to urinate — they don’t have adequate protection for winter and the shelters will leak no matter how many sheets of metal they are built with,” she added.

Under the slogan #DIYNepal — Do It Yourself, Nepal — Shrestha has led initiatives to distribute blankets and medications in remote villages, largely because she feels that neither the government nor big NGOs have filled the gap.

Inside a damaged schoolroom in Kapan, a village on the outskirts of Kathmandu, July 2015.

Though international organizations provided temporary shelters in the months after the quakes, Shrestha says these “handout models” ultimately need to be replaced by long-term efforts.

According to the Shelter Cluster’s latest assessment, 99 percent of people it spoke to reported that they had not received training, assistance, or information about how to rebuild more safely than before. Over construction or education, cash was the most commonly received assistance.

“Immediately after the earthquake, we were given 10,000 rupees [equivalent at the time to around $150] to help us rebuild,” said 41-year-old Bajendra Gurung, a resident of Laprak village in the Gorkha district who lost his 5-year-old daughter when his house collapsed in the April 25 earthquake.

“This money helped us in the emergency, but not enough to sustain for the long term.” 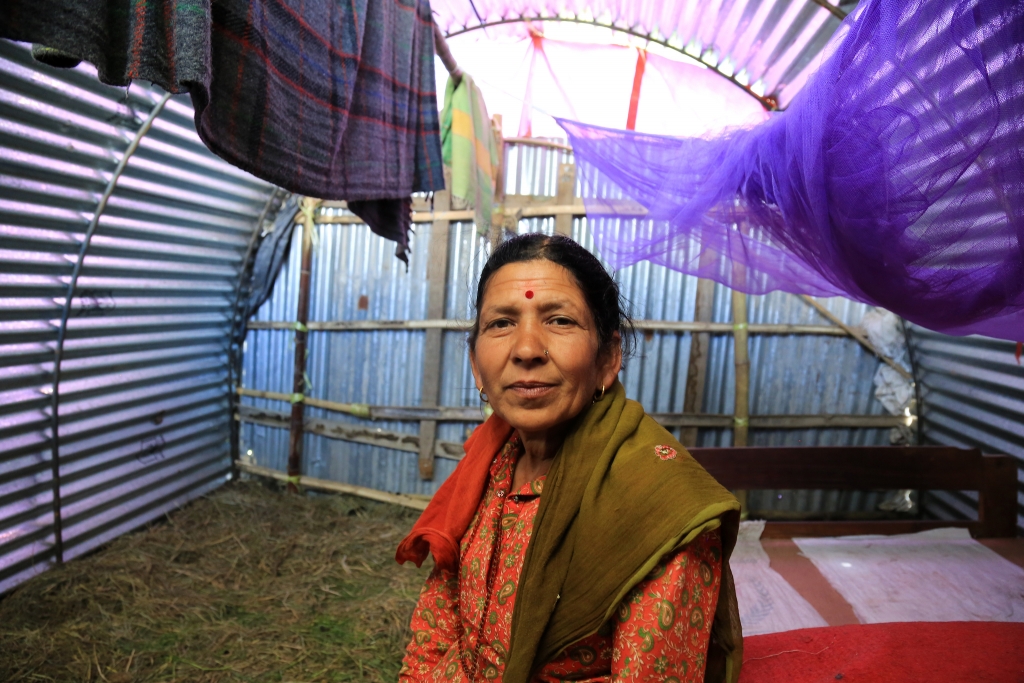 Inside a temporary shelter in Nagarkot village, July 2015.

“Even villagers are voicing that they are tired of handouts,” Shrestha explains. “They want to know how to build earthquake-resistant houses and how to create a sustainable livelihood.”

“We Nepalis are strong,” said Gurung. “No matter what life gives us, we will try to smile and move forward as best we can.”

David Caprara is a journalist who specializes in South and Northeast Asia. He spent five months reporting in Nepal after the 2015 earthquakes. Follow him on Twitter at @caprarad.