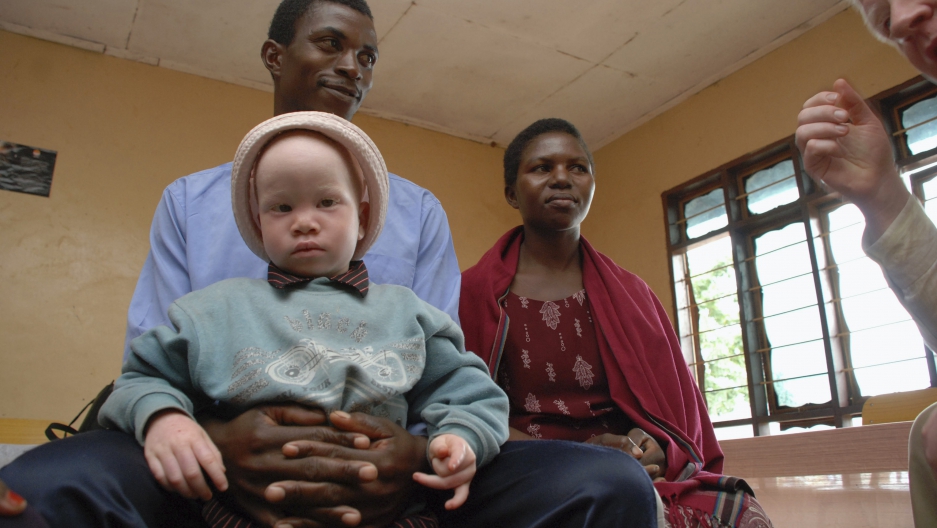 Elias Stariko sits next to wife, Farida Bwire, as he holds their son at a school sponsored by Under the Same Sun (UTSS), in Geita, Tanzania, November 24, 2011. UTSS is a Canadian non-profit organization that sponsors pupils with albinism in Tanzania.
Credit: Emmanuel Kwitema
Share

JOHANNESBURG, South Africa — Police in Malawi are investigating a disturbing crime: A mob burned seven men to death on Tuesday after one was found carrying a bag suspected to contain bones of people with albinism.

Locals from the Nsanje district, in southern Malawi, believed the bones were for use in witchcraft. Images in local media show a crowd around what appears to be the charred body of one of the men.

James Kadazera, a police spokesman, told the Nyasa Times that experts would be testing the bones "to establish whether they are albino humans or not." Kadazera also said that police were investigating the mob killings, but had yet to make any arrests.

What's going on here? Behind the mob anger is another disturbing problem: In Malawi, as in neighboring Tanzania and Mozambique, albinos are regularly hunted and killed for their body parts, which are sold for use in witchcraft. It is a lucrative trade, with the body parts of albinos believed to possess magical powers to bring good luck.

More from GlobalPost: For Tanzania’s albinos, superstition leads to violence

Albinism is a congenital disorder that leaves little to no pigment in a person's skin, hair and eyes. It has a higher prevalence among people in sub-Saharan Africa.

As many as nine albinos have been killed in Malawi since December 2014. According to Amnesty International, last year 45 incidents against albinos were reported, including murders, attempted murders, abductions, attempted abductions, and digging up graves where people with albinism were buried.

Some in Malawi blame gangs dubbed "albino hunters" for a recent rise in incidents. The fear of attacks has led families to withdraw albino children from school, while others have moved from rural to urban areas for safety.

Malawi’s government has been holding awareness events, and last year launched an investigation into the root cause of a spate of albino killings, backed by the United Nations Children’s Fund. Police in Malawi have also been given the questionable instruction to shoot anyone caught attacking albinos.

More from GlobalPost: Africa's albinos seek their place in the sun

But Amnesty International says that the Malawi government should be doing more, citing the case of Eunice Phiri, a 53-year-old woman with albinism whose body was found mutilated in January.

She had been tricked by three men, including her own brother, into accompanying them on a trip to a national park in Zambia. There they killed and dismembered her.

“The government must take urgent action to protect people with albinism and to address the root cause of the violence and discrimination they suffer,” said Deprose Muchena, the organization's director for southern Africa.

“They must also take steps to ensure that superstitions and harmful cultural beliefs which fuel the attacks are tackled.”

While it has yet to be confirmed whether the seven men killed on Tuesday were indeed carrying human bones, Malawi’s police chief said that frustrated communities have started lashing out against perceived albino attackers.

In another attack, a month ago, a mob killed four elderly people in southern Malawi who were suspected of practicing witchcraft.