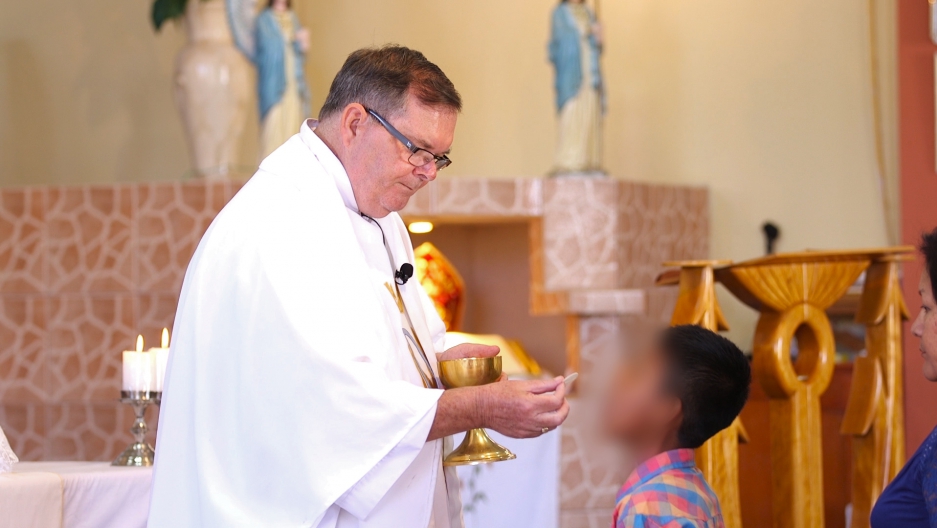 Paul Madden, who admitted to molesting a child during a missionary trip to Ireland, seen working as a priest in Puerto Huarmey, Peru.
Credit: Jimmy Chalk
Share

RIO DE JANEIRO, Brazil — After the hit movie “Spotlight,” the world might be wondering how many predator priests are still members of the clergy.

The Boston Globe’s investigation busted open a massive Catholic Church scandal in the United States 14 years ago. But in remote parts of South America, GlobalPost discovered that the church practice of reassigning child abusers to another parish, instead of defrocking them, has continued.

In 2014 and 2015, GlobalPost tracked down five priests who were accused of child sexual abuse in the United States and Europe, and who had transferred to parishes in South America where they continued to work in the church.

In the weeks after the publication of the multipart investigation, Fugitive Fathers, two of those priests were removed from their positions by the church. A third was removed after an earlier GlobalPost story and a fourth had already left the church when we tracked him to rural Ecuador.

We’ve just learned that the fifth priest in GlobalPost’s investigative project, Paul Madden, has retired from the church. Madden, an admitted child molester, was reassigned in 2003 from Mississippi to a small church in Puerto Huarmey, a remote fishing village in the Diocese of Chimbote, Peru, where he worked as a priest until last month.

More from GlobalPost: The real drama behind Oscar winner 'Spotlight' is still playing out around the world

Madden was accused of repeatedly molesting and raping a 13-year-old boy on a mission trip to Ireland when he was serving in the Diocese of Jackson, Mississippi in the 1970s. The diocese settled a lawsuit with the boy’s family for $50,000 and Madden wrote a letter apologizing for the molestation.

When GlobalPost caught up with Madden in Puerto Huarmey, he also admitted the abuse. “Something happened, I was drunk,” was how he put it in the filmed interview.

He said his flock in Peru didn’t know about the abuse, and that they didn’t need to know about it since the case had been settled long ago.

When we asked Vicar General Rodriguez about it he also claimed to know nothing about the abuse, and promised an investigation into Madden. But then he defended the priest in subsequent phone interviews. Madden remained in his post until his recent retirement.

“This is good, this is a good thing that the priest will change. The town is content,” said Rosa Flores Vazquez, a mother who attends the Puerto Huarmey church where Madden used to preach. “We feel better.”

Madden has retired from the church, but a journalist in Argentina now says he’s on the trail of a different priest accused of abuse — one who GlobalPost has confronted, too.

Carlos Urrutigoity was the subject of a GlobalPost investigation in 2014. He had left Pennsylvania in disgrace after accusations he molested a teenage boy, and his former superior described him as “a serious threat to young people.” Yet he was reassigned in 2006 to Ciudad del Este in Paraguay, where he soon rose to the position of vicar general, the second-in-command of the diocese.

A few weeks after the story went online, Pope Francis sent a special envoy to Ciudad del Este. Shortly after that, both Urrutigoity and the bishop who had protected him were removed from their positions.

It is now unclear where Urrutigoity is.

A statement by his former diocese in Paraguay last year said he had transferred back to his native Argentina. Now, a news organization in the Argentine city of Mendoza, Urrutigoity’s hometown, is trying to find out if the disgraced priest is working in the diocese.

The Mendoza Post published a lengthy story on Urrutigoity last week. Citing unnamed sources, the author Christian Sanz wrote that he is trying to establish where Urrutigoity is and what his role is in the church.

“I should know more in the next day or two,” he said.