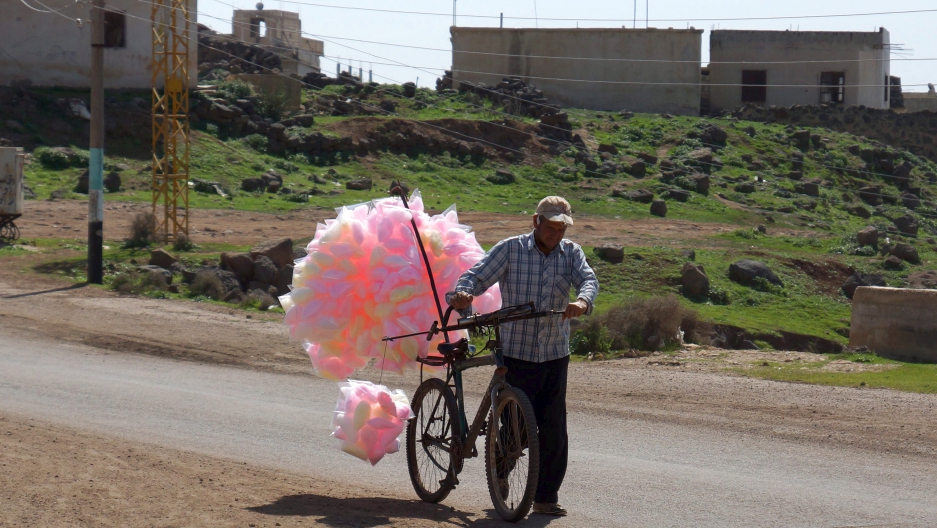 A man sells cotton candy as he pushes his bicycle along a street in the rebel held al-Ghariyah al-Gharbiyah town, in Deraa province.

Just a week ago, aerial bombing runs in Syria were estimated to average around 100 sorties per day.

Now they're down to six.

That's according to Syria-watcher Joshua Landis, who was among the experts taken by surprise at the relative effectiveness of the partial two-week ceasefire agreement brokered by Moscow and Washington.

"It's astounding people," Landis says. "It shows how dependent all the actors are on the ground in Syria on their sponsors, the big nations that are feeding them with arms, money and diplomatic protection."

Russian officials say they've halted all Syria bombing runs to avoid "mistakes." American and Russian militaries have exchanged maps and shared some intelligence on the positions of various Syrian factions.

"This is essentially a deal that was made between America and Russia, and is being pushed on the Syrians. And so far it's working," Landis says.

Similar deals have failed in the past.

That hasn't stopped the Arab press from speculating Washington and Moscow have finally struck a deal to divide up Syria.

"A week ago, I believed that Russia and [Bashar al-Assad] were on the march, that they were taking back territory at a fairly quick clip, that the Syrian opposition rebel forces were in chaos and falling backwards and that Assad would want to press his advantage," he says. "I thought [the truce] was just Russia giving a little sugar to America — so that the medicine would go down, the medicine of Russia taking this back and and basically asserting Assad as the ruler of Syria again."

However, Landis adds, "now I'm not sure."

UN officials are slated to begin the next round of Syria peace talks in Geneva on March 9. America has little leverage going into the discussions. It's counting on Russia needing to pull back, to avoid getting stuck in a quagmire.

But it's far from clear how far Russia's Vladimir Putin will go on behalf of Syria's leader.

"So far, Putin looks like a tough guy who's willing to go a long way, like he wants to destroy al-Qaeda in Syria and ISIS," according to Landis, who blogs at Syria Comment. "Putin said 'We're going to destroy terrorism because there are 3,000 Russians fighting as jihadists in Syria. We don't want them coming home' ... Now how much of that Putin is going to insist on carrying out, we'll have to wait and see."