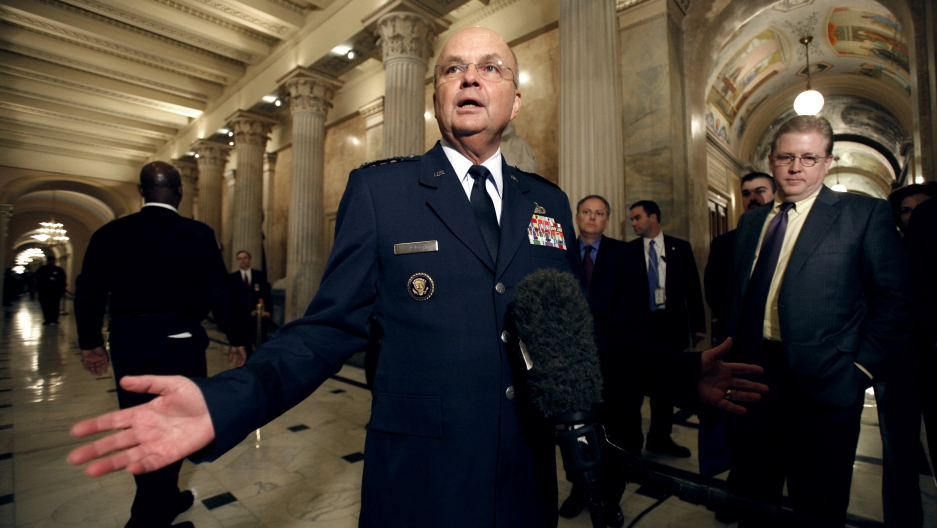 CIA Director Michael Hayden speaks to reporters upon his arrival in the Capitol for a meeting with the House Appropriations Committee's Select Intelligence Oversight Subcommittee, in Washington December 13, 2007.

”If any future president wants (the) CIA to waterboard anybody, he better bring his own bucket, because CIA officers aren’t going to do it.”

Michael Hayden is the only man ever to have been head of both the National Security Agency and the Central Intelligence Agency.

Hayden was responding to comments from Republican frontrunner, Donald Trump, that torture and waterboarding work in interrogations.

“First of all,” says Hayden, “torture as a legal definition has a very narrow and specific meaning. But we are talking about the enhanced interrogation techniques that CIA used.”

“A lot of CIA officers felt that that kind of social contract that they through they had with their government and their nation was violated when they were — for want of a better word — pushed out into the bus-lane by the new administration, condemning what it was they had done for the previous administration as felonies. So they’re just not going to go do that again.”

Hayden has a new book out called ‘Playing to the Edge: American Intelligence in the Age of Terror.’ He says he wrote the book “in an effort to defend history, and exactly what went on.”

“It is an entirely honorable position for someone to say, ‘I don’t want my nation doing those things.’ And honest men differ on that view. But we in the agency, our life experience tells us that we did get incredibly valuable information not otherwise available from these detainees through this program. So the sentence you’ve got to form is not that 'I oppose this and it didn’t work anyway.’ It’s ‘I oppose this whether or not they do work.’ Now that’s a really honorable position.”

“But when you get to candidate Trump, it’s a bit different,” says Hayden.

“(Trump) says he would do waterboarding and a lot worse, because ‘they deserve it.’  And that’s the point that people like me really burp on,” explains Hayden.

“We didn’t do this to anyone because they ‘deserved it.’ We were not backward-looking. We are not some sort of judicial process. We’re an intelligence organization. This was always forward-leaning,” he says. “This was always done because we thought the detainee had lifesaving information, not because we were mad at him because of something he had done in the past.”

“And so candidate Trump’s formulation just turns our world on its head and therefore I, and folks like me, reject it,” says Hayden.

Hayden supported enhanced interrogation during his tenure at the CIA. He says he inherited 13 ‘techniques’ which after review he whittled down to six by the beginning of 2007.  These included:

All techniques were abolished by President Obama by executive order two days after his inauguration in 2009.