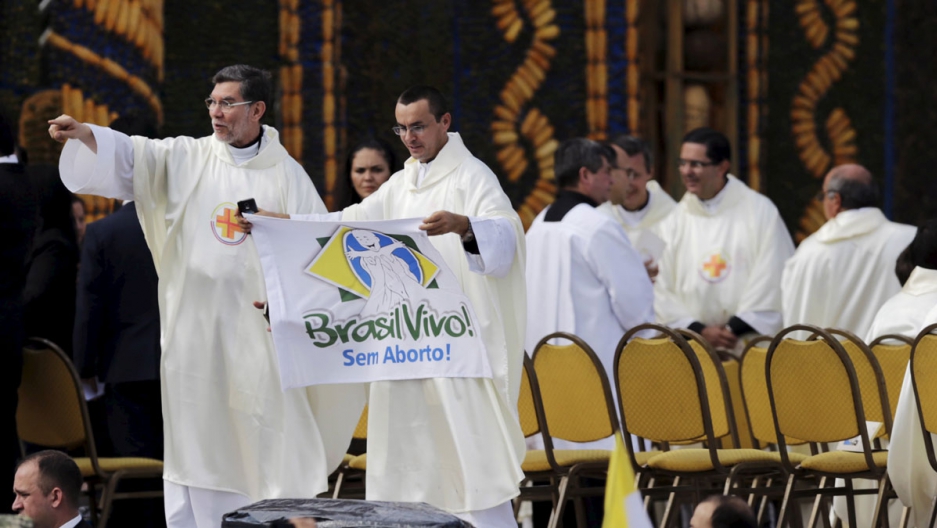 A priest holds up a banner reading "Brazil alive! Without abortion" while standing near an altar where Pope Francis later celebrated mass.

The Zika outbreak has highlighted an important issue in Latin America and the Caribbean — the region has some of the world's most restrictive abortion policies. This has led to another set of problems.

Threatened by the Zika virus, which scientists suspect causes microcephaly — a condition where babies are born with abnormally small heads — some countries in the region including Brazil, Colombia and El Salvador have advised women not to get pregnant.

The outbreak has caught the attention of the global media, but not many have asked another crucial question: What happens to pregnant women whose fetuses have been diagnosed with microcephaly? Can they choose to terminate their pregnancy?

In most countries in the region, fetal impairment is not a legal ground for abortion.

In Brazil, where 1.5 million people may have been infected by Zika, conservative lawmakers are planning to tighten existing abortion laws, sentencing women who abort a fetus with microcephaly to 4.5 years in jail. It was a counter-reaction to a petition asking the Brazilian court to allow women with microcephaly-affected fetuses to terminate their pregnancy.

Abortion is illegal in Brazil except in cases where the pregnancy threatens the woman's life and in cases of rape or anencephaly — a severe fetal impairment where the upper brain and skull does not develop.

Yet Brazil cannot claim to have the strictest abortion policies in the region. In Chile, Nicaragua, El Salvador and the Dominican Republic, abortion is illegal under any circumstances. Together with Vatican City and Malta, they comprise the six countries in the world that have a blanket ban on abortion, according to data from the United Nations. 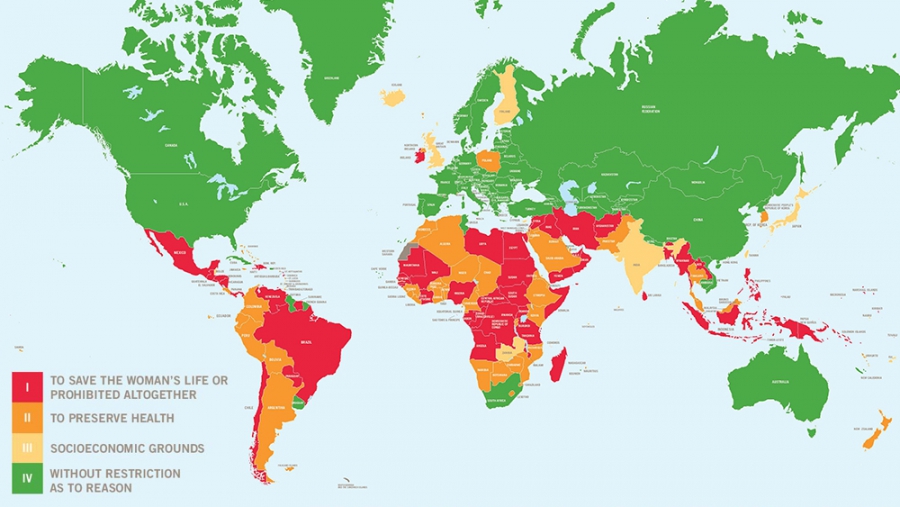 This map showing the world's abortion laws in 2014 was produced by the Center for Reproductive Rights, a global reproductive rights organization using UN's categorization.

It's clear that Latin American and the Caribbean, along with Africa, the Middle East and southeast Asia, were regions with the most restrictive abortion laws.

The chart below shows the spectrum of abortion laws across Latin American and the Caribbean, with Mexico and Cuba at opposite ends of the spectrum.

Restrictive abortion policies lead to other social and health issues, according to a report by the UN's Department of Economic and Social Affairs.

High fertility rate and rapid population growth are seen by the UN as a barrier to reducing poverty levels and reaching development goals. They are often linked with low life expectancy, low living standards and lack of women's rights and reproductive health.

The maternal mortality ratio, which measures the number of women who die from pregnancy-related causes, was three times higher in countries with restrictive abortion policies. Such policies could contribute directly to the risk of maternal death by limiting the available options for safely aborting an unwanted pregnancy.

Another stark difference between the two groups of countries is the rate of unsafe abortion. It was four times higher in countries with restrictive abortion policies.

The problem of unsafe abortion was even more critical in Latin America and the Caribbean, as the region had the highest unsafe abortion rate, according to the latest World Health Organization data — from 2008.

Amid the outbreak of Zika, the UN has called on Zika-affected countries to loosen abortion laws and improve women's access to sexual and reproductive health services. Many women's rights groups in the region saw the crisis as a window of opportunity to secure more abortion rights.

However, in at least some cases they'll have to fight an uphill battle against conservatives who are also leveraging the outbreak to consolidate their support for tougher abortion policies, as in Brazil.