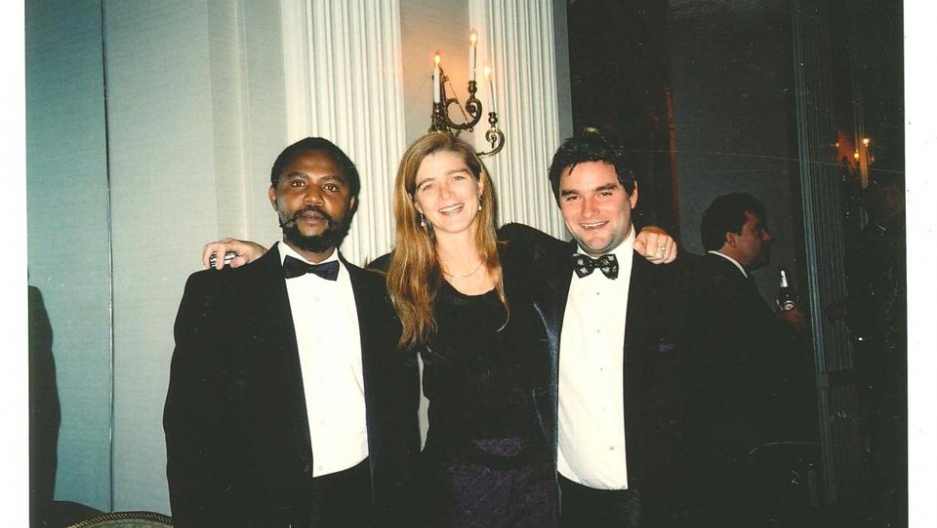 Alexis Sinduhije, Samantha Power and Bryan Rich at the Committee to Protect Journalists awards in 2004

The former Burundian journalist-turned-politician-turned-exile once had close friends in high places in the US government.  But last December, Washington slapped sanctions on Sinduhije, alleging he supported armed rebellion and planned to assassinate senior Burundian officials.

It's safe to say his friendship with Samantha Power, US Ambassador to the UN and human rights historian, has fallen by the wayside.

"If I would have stood in front of her, and looked at her in the eyes, I would say, 'You shake the hand of the killers, of the evil,'" Sinduhije said in a Skype interview from Paris. "I have lots of affection for Samantha Power, but has she achieved much? I don't think so. If you hear only one side, and you don't hear the other side, you are not doing diplomacy."

UN Security Council members, including Power, touched down in Burundi in mid-January, the group's second visit to the tiny central African nation in 10 months. Power held extensive meetings with Burundian President Pierre Nkurunziza, who has insisted on running for a third term, ignoring a constitution that barred him from doing so.

Sinduhije became friends with Power when he was a Shorenstein fellow at Harvard University in 1997. Power founded the Carr Center for Human Rights Policy the following year. She served on the board of Sinduhije's Radio Publique Africaine, and helped him find funding for it.

These days, Sinduhije says he still believes in the promise of democracy for Burundi. But his support for nonviolence comes with qualifiers.

"In Burundi, we have a terrorist as the head of the state. We have this man who is killing 150 people a day. And that person who is ruling a country, who is killing his own people, he's not someone who understands that we can build a country on debate, based on ideas," he said. "What can I tell to those youth who had taken the weapon to defend themselves? I'm in the dilemma. Am I going to tell them to stop? Or am I going to tell them to continue?  I don't have the answer."

As for the US sanctions, Sinduhije said he finds it "painful" to be on the same list that once included Osama bin Laden. He claimed Washington has no proof that he advocates for the violent overthrow of Burundi's government.

But journalists who have known Sinduhije for more than a decade, like Farah Stockman, a columnist and editorial writer at the Boston Globe aren't sure they recognize their former colleague. Stockman has written extensively about Sinduhije's transformation.

"He talked about Jeffersonian democracy, he talked about freedom of speech, and he was really famous for getting Hutus who'd killed Tutsis, and Tutsis who'd killed Hutus on air, on the radio, confessing their crimes and expressing remorse," Stockman said. "He really talked about journalism as reconciliation, and had these big dreams for his country."

Sinduhije announced his plans to run for president of Burundi in 2010 and attracted followers. But he was arrested in 2008 for holding an unauthorized meeting.

"There's a lot of evidence that his members were being killed, and some of them took up arms," Stockman said. "He says, 'Look I'm not part of the armed rebellion, but I morally support it.'"

Sinduhije has hired a lawyer and is hoping to see an unclassified version of the accusations against him. Stockman says she was unable to get officials in Washington to share their evidence with her.

"I couldn't get anything out of them, except people off the record who told me, 'Look, if you're going to write an article about how he's not involved in armed rebellion, you're going to be wrong,'" Stockman said.

"It reminded me a lot of Syria, and how you have peaceful democratic activists, who are peacefully advocating for change, the government cracks down on them, and they really see no choice but to take up arms because they have to defend themselves. They don't want to die."