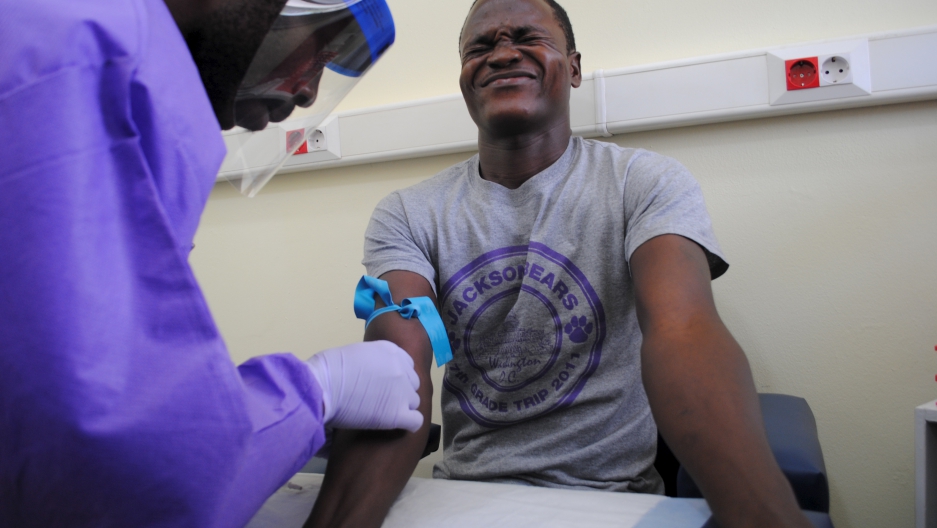 The blood of a survivor of the Ebola virus is extracted as part of a study conducted at Liberia's John F. Kennedy Hospital in Monrovia, Liberia in June.

Preliminary studies of Ebola survivors in West Africa are showing that those who survived the epidemic are experiencing a range of health effects. The National Institute of Allergy and Infectious Diseases announced on Wednesday that survivors report a high prevalence of eye, musculoskeletal and neurological complications.

New York Times science writer Sheri Fink says Wednesday's announcement suggested a number of surprising findings. "About 13 percent of the people who the researchers thought didn't have Ebola actually had antibodies, the parts of the immune system that you see after you fight off an infection. That suggests they may have actually had Ebola but might not have shown symptoms."

And that may have implications for how we think about Ebola. "We always thought of Ebola as this horrific, deadly, catastrophic illness but it may be that in some cases there is a milder infection."

Nearly 29,000 people in West Africa were infected with Ebola during the 17-month outbreak, which started in 2014.  Roughly 11,300 died, but there are about 17,000 survivors of the infection in Guinea, Sierra Leone and Liberia and there's concern that their health issues need to be managed, in part to prevent another outbreak.

"The most striking [finding] of all was that a full 10 percent of those survivors had something called uveitis, an eye disorder that can lead to blindness. It's something you can treat but if you don't provide the follow up to Ebola survivors, then people are in danger of losing their sight.

An especially puzzling and possibly dangerous finding was that a number of the male survivors were found to have Ebola in their semen, in some cases more than a year after having Ebola symptoms.

"Some of the men who had negative semen tests once or twice, later had positive tests, suggesting that it's possible they could be shedding the virus intermittently," she says.

The preliminary results of the NIH study of Ebola survivors were announced on the same day that a Scottish nurse was readmitted to a London hospital for a third time since contracting Ebola. Fink says Pauline Cafferkey contracted Ebola in Sierra Leone while volunteering to help during the epidemic. "She's had quite a difficult course of surviving Ebola."