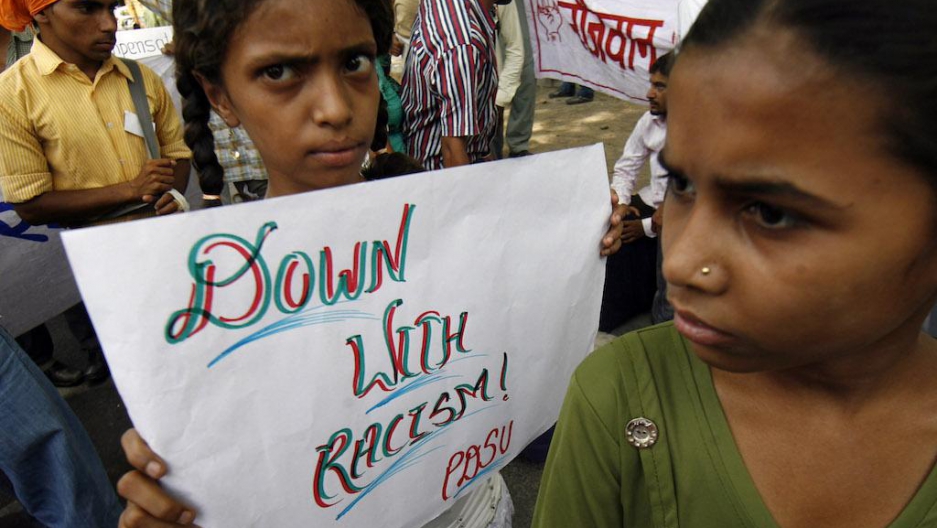 Women traveling in India are often warned to be careful. But there’s another persistent danger that fewer visitors are aware of: Racism.

On the night of Jan. 31, a Tanzanian woman was reportedly beaten, stripped and paraded naked by a mob in the southern city of Bengaluru after a road accident. The woman was not involved, but the crowd assumed that she knew the driver responsible because he too was black, from Sudan.

While police in India do not keep a separate record of racially motivated crimes, incidents like this one come into the limelight every year. Last March, two separate mob attacks were recorded against African students in Bengaluru. In 2014, a huge crowd chased three African men through a subway station in New Delhi. The murder of a Nigerian living in Goa led to protests and a diplomatic standoff between the two countries in 2013.

Even aside from such attacks, expats in India, especially those from African countries, have horror stories to tell about the racism they face every day.

“The other day, someone spat at me,” said Hassan Mubarak, a Nigerian student who has lived in Greater Noida, a city outside Delhi, for three years. “They run away like I’m a monkey, just because of the color of my skin? It saddens me deeply.”

Mubarak is one of thousands of students from the African continent who move to India in the hope of a better education. Technical courses at private universities in satellite cities like Noida and Greater Noida attract hundreds of foreign students every year. While students form the majority of African expats in India, the country is also a popular destination for medical tourists because of its relatively cheap but high-quality hospitals.

However, despite seeing African expatriates, students and visitors in their midst for many years — centuries, in fact — many Indians are yet to become comfortable with them. The alienation makes stereotypes and rumors circulate quickly.

“Some are fine, but some are very noisy, they wear obscene clothes,” said Sunil Kumar, a security guard at a Greater Noida compound where many African students live. “One of them broke a guard’s hand here,” he added. Further questioning revealed that the guards had used sticks to beat the student after he had “deliberately” run an auto-rickshaw over a guard’s foot.

“They just look scary sometimes,” said Pradeep Kumar, a pizza delivery man. He referred to Africans as “habshi,” a derogatory word used for a community of African slaves brought in by the British during the colonial period.

“I heard once that one of them cut up and ate someone,” Kumar said. He did not know if the story was true and had never faced any trouble with African customers, but said he did not fear white visitors the same way.

“They run away like I'm a monkey, just because of the color of my skin? It saddens me deeply."

Words like the one Kumar used and others denigrating the color of their skin are all too familiar to many African students.

“I have never experienced it myself because I am lighter and sometimes confused for Indian, but my friends are abused in Hindi — people spit, point and laugh at them,” said 20-year-old Horacio Mendes, a student from Angola.

He has been in India for a year, and thinks that white visitors face similar ridicule. “It’s directed at any outsiders, but the Indians studying in the universities are better because they are younger and their minds are more open.”

As outsiders, many feel that they cannot claim the same rights Indians do, and that the police would not take them seriously. Nigerian student Emmanuel Anuwe points to discrimination among Indians themselves, like the racism faced frequently in Delhi by people from India’s northeastern states, who say that other Indians call them “chinki” — Chinese — and treat them as second-class citizens.

“You can tell people think you are dangerous or inferior by their body language, but it happens everywhere,” said Anuwe. “As an outsider I probably can’t complain, I just try to be approachable to Indians.”

Outsiders have little reason to hope that authorities will help. The Tanzanian woman attacked last month claims that a police officer was present during her ordeal but failed to intervene. In the days after the incident, police and state officials insisted that there was no racial motive to the violence.

In January 2014, a member of the Delhi state assembly, Somnath Bharti — then serving as state law minister — led his supporters in a raid on a south Delhi apartment housing several African women, whom he accused of operating a drug and prostitution racket.

The group did not have a warrant and no proof was found, while the women filed a complaint of molestation — yet many residents thanked Bharti for his service. He was subsequently re-elected. Several Africans living in the area, meanwhile, said they felt forced to leave.

While Anuwe says that racism is everywhere in the world, Mubarak finds it is worse in India. While he would have fought similar slurs and intimidation back home in Nigeria, Mubarak says, here he runs from confrontation.

“Even if they hit me, I won’t say anything because I am a foreigner,” he says. “It’s not my country.”