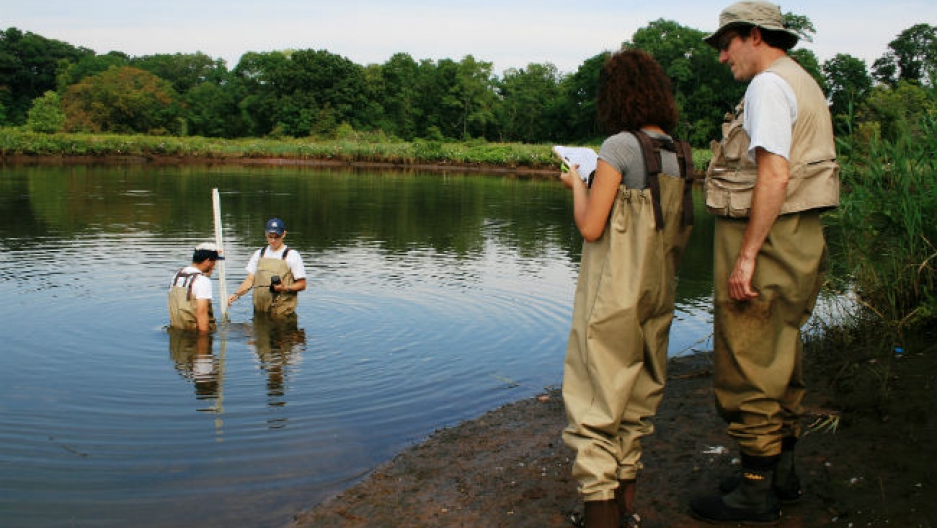 Common Ground High School students study water quality in the river that flows near their campus as a part of Green Jobs Corps, an environmental employment and leadership training program.

Standing waist-deep in Connecticut’s West River, Nyasia Mercer’s mind is far from the cold, murky water lapping against her rubber waders. The high-schooler is thinking of people. The ones who swim here. Fish here. The ones who unwittingly dump liquid waste into nearby sewers. And how few of them know what swirls through their neighborhood waterway.

“It’s sad,” Mercer says. “A lot of these things could have been prevented if the community knew how. A lot don’t know how to advocate for themselves.”

But self-advocacy isn’t a problem for the students at Common Ground High School in New Haven, where Mercer is a senior. She and her classmates spend their school days sometimes literally waist-deep in environmental justice issues. Common Ground, a charter school with almost 200 students, integrates conservation, sustainability, and environmental studies into the curriculum and across disciplines.

And it’s not the only one. Some schools across the United States are finding place-based learning creates a valuable connection between students’ local environment and their education, especially during a time of rapid climate change.

Environmentally-themed schools have grown in popularity since the early 1990s, fueled by increasing climate-change awareness, a push for smaller, STEM-based schools, and a desire to connect an urban population of students to nature, says Brigitte Griswold, director of youth programs at The Nature Conservancy.

While climate change awareness has improved over the past two decades, US middle- and high-school classrooms spend an average of only one to two hours per school year covering it, according to a survey of science teachers published in the February 2016 issue of Science. And misinformation abounds: Thirty percent of teachers say climate change is likely caused by natural events; twelve percent don’t emphasize a human cause.

That’s why it’s so important to have schools that incorporate environmental literacy across the curriculum, Griswold says. Every subject area is tied in some way to the environment.

Place-based learning isn’t solely for the elite. Half of Common Ground’s student body qualifies for free or reduced-price lunch, and two-thirds are black or Hispanic.

“What’s really important is that (students) have the tools they need to speak up for what they know is important,” says Liz Cox, Common Ground’s director. “That they have the fundamental understanding of what it means to live in a sustainable way.”

One of the attractions of an environment-based curriculum is that students find their work has real-world outcomes. They’re no longer doing work just for the sake of doing it.

Mercer and her classmates, for example, collected data on water quality, which the school presented to the Environmental Protection Agency’s New England Environmental Justice Council. She and her peers also put up signs near sewers adjacent to the river to warn community members against polluting the waterway.

Their projects blossomed. Mercer has found herself planting trees around Connecticut with the Urban Resources Initiative, walking in a New York City 2014 climate march, and cleaning up metal and glass strewn across Jamaica Bay after Hurricane Sandy.

The Port Townsend School District in Washington State, similar economically to Common Ground, is developing maritime-themed schooling to match its surroundings: the tip of the Olympic Peninsula, overlooking the Salish Sea. Grant funding allows teachers, experts, and community partners to collaborate on curriculum design for the district’s nearly 1,200 students. 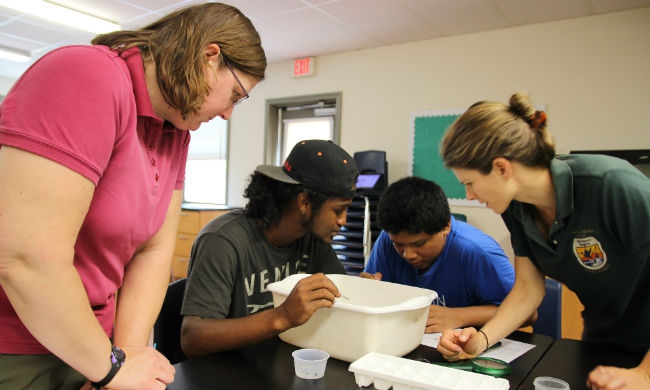 For example, last spring a science teacher interested in introducing robots to his students contacted the Port Townsend Marine Science Center. Together they designed a lesson for the high school seniors, which involved using remotely operated vehicles to collect data on sea anemones living at the bottom of a pier outside the science center. For that project, students received lessons in both robotics and biology.

“(The partnership) is important because we inspire conservation of the Salish Sea and place-based learning fosters that inspiration,” says Alison Riley, marketing and development coordinator at the science center. “Our goal is that every child will be ocean literate. They grow up here. It should be a part of their life.”

The cross-disciplinary work continues inside the classroom, too. A math and engineering lesson on a hillside slope coincides with a cliff-restoration project with the North Olympic Salmon Coalition. A social studies class investigates how the government, activists, and the private sector interact on environmental issues.

Even younger grades can participate. Port Townsend first- and second-graders selected animals from the Salish Sea to study habitats. Students visited local beaches to see where their animals lived.

Students also like the way their work is viewed by adults in the community, says Sarah Rubenstein, project director of Port Townsend’s Maritime Discovery Schools Initiative. Middle-schoolers told Rubenstein that they’re more likely to hear negative stereotypes about their age group. So they’re excited, she says, that clearing invasive species or building bike racks gives adults a positive perception of them.

The district likes to use the word “stewardship” rather than “conservation” to describe its focused curriculum, Rubenstein says. Especially as graduates enter the workforce, schools want students to understand how industry affects the environment.

“The difference is important because students leave seeing themselves as responsible owners of the local community but also on a more global scale,” Rubenstein says. “They understand how their actions have a local impact but also a global impact.”

And they won’t be the only ones studying it. Across the continent is Broadneck High School in Maryland. Located at sea level, surrounded by three bodies of water—the Severn and Magothy Rivers and the Chesapeake Bay—the school community is acutely aware of what could happen when climate change brings rising sea water.

Every school in Anne Arundel County operates under a different theme, and Broadneck’s location influenced its decision to focus on “environmental literacy.”

The school’s signature program facilitator, Michelle Weisgerber, helps teachers incorporate the theme into class lessons, though not every lesson has to include environmental literacy. An English class studying Henry David Thoreau might go to a nearby farm to connect Thoreau’s inspiration to his work. Or a political science class might study an article on fracking through both the Fox News and CNN journalistic lenses and compare points of view.

Broadneck has gained national recognition for its environmental focus. Rep. Donna Edwards invited one of the school’s students to participate in an upcoming environmental roundtable: “Environmental Challenges and the Impact on Maryland Communities.”

Back in Connecticut, Common Ground’s Mercer has spent four years trekking through rivers and cleaning up hurricane-wrecked beaches. So it might seem strange—at first glance—that she plans to become a midwife. But Mercer understands how her high school’s focus on environmental justice inspired her career choice.

“What attracted me to the environmental work is helping frontline communities that don’t have a voice,” Mercer says. “I see being a midwife as a way of advocating for women’s health.”

When students learn about their local environment, they have a stake in the vitality of it, school leaders find.

Trekking through the murky river together, they transform it.