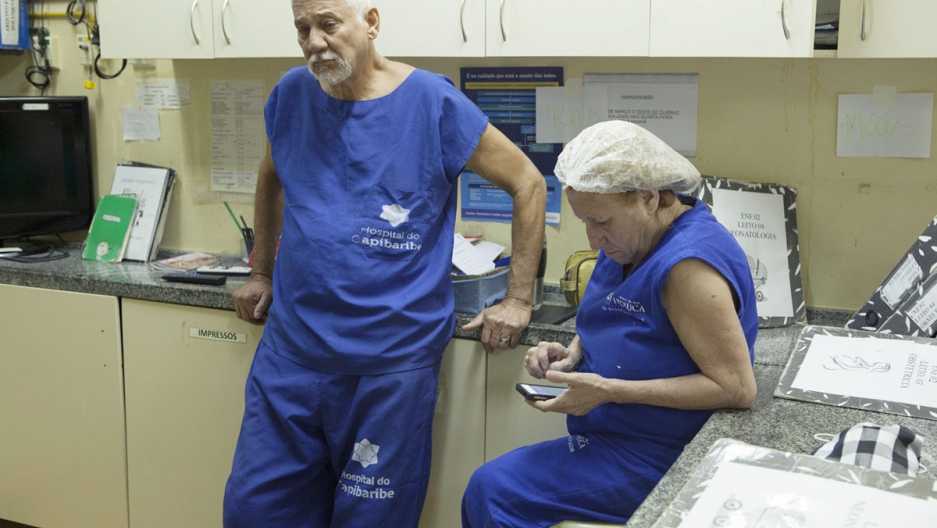 Doctors and nurses at the Santo Christo hospital in Ipojuca, Brazil say their facility has been stretched to its limits with the recent health care crisis.

Eight out of 10 patients who walk into Ipojuca’s hospital have a rash, a fever and terrible pain, says nurse Vanessa DiBrito Sales. They’ve all been bitten by the wrong mosquito, and they’re all suffering mightily for it.

Like other public hospitals in Brazil, Ipojuca’s is contending with three mosquito-borne epidemics, plus an economic crisis. The Zika virus hit this region just as it was battling historic outbreaks of dengue fever and chikungunya, which have similar but usually more miserable symptoms. Before the epidemics, DiBrito Sales says, Ipojuca’s emergency room served 150 patients daily. Today it serves 250. In the meantime, its small staff of four doctors has shrunk to three. 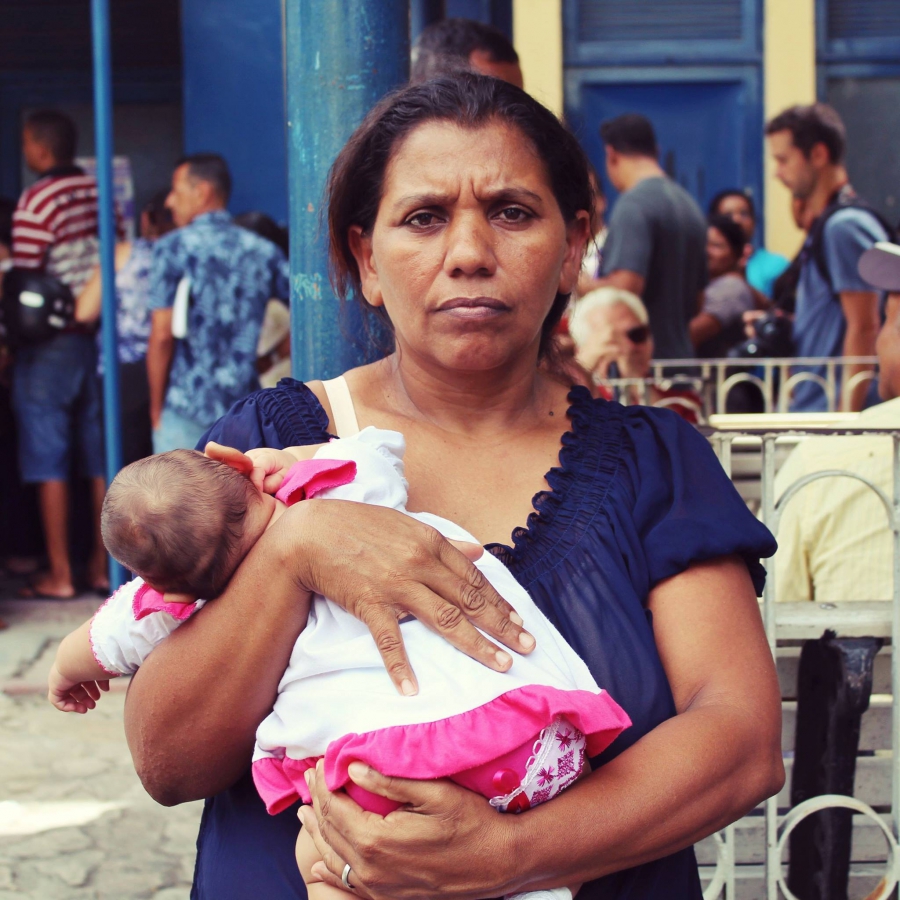 For parents like Maria Angela Braz da Costa, 40, mother of two-month-old daughter Isadora who has microcephaly, access to adequate health care has been a challenge.

The triple-whammy of mosquito-borne illnesses has pushed Brazil’s universal healthcare system beyond its already stretched capacity — at a time when there is little money to shore it up. Here in the state of Pernambuco, the scope of the epidemics is stunning: Reported mosquito-borne illnesses rose from 20,000 in 2014 to 150,000 in 2015, according to the State Health Secretariat of Pernambuco. The demands on the system swelled further when thousands of babies in the region were born with microcephaly last year, a condition usually accompanied by a lifetime of developmental and physical delays.

In all but the most severe cases of dengue, chikungunya and Zika, patients are treated with hydration and Tylenol, and they typically feel better within a week. But babies with microcephaly exact a much higher toll on the health system: Ideally, they are attended by a phalanx of medical professionals who provide them with exams, therapy and rehabilitation throughout their lives.

Many are not optimistic that the country’s public health system is up to that challenge.

“This problem came in a very bad moment because our health system was already very, very damaged,” said Dr. Adriana Scavuzzi, women’s health coordinator at IMIP, the largest maternal and infant care hospital in Recife. “We don’t have enough hospital beds, we don’t have enough resources or financial support, and then suddenly there is this new problem that demands money.”

Brazil has the largest public health system in the world, serving three-quarters of the country’s 200 million residents. Universal healthcare was guaranteed in the 1988 constitution, and it has been in large measure a success: The average lifespan for Brazilians has risen from 66 years to 75 years since 1990. And the cost of the system is relatively low: Brazil spends less than 10 percent of its GDP on healthcare, as compared to 17 percent spent by the US.

As the country’s economy has tumbled in recent years, the government has struggled to maintain its investment in the system. Since the microcephaly outbreak, Brazil’s government has promised to devote 136 million reais — $34 million — each year to expand rehab centers for children with microcephaly. But in the meantime, the Ministry of Health’s 2016 budget has been cut by nearly 3 percent, 2.5 billion reais, or $631 million. 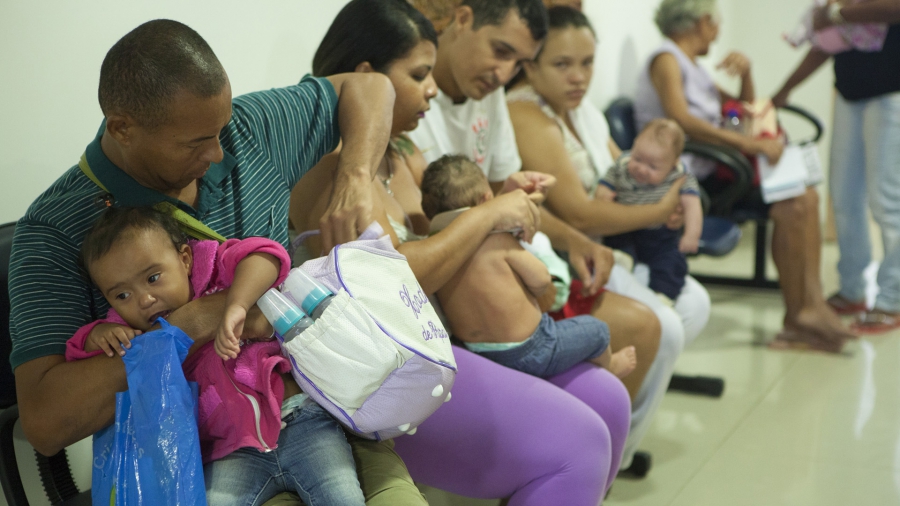 Parents wait with their children at the public hospital in Ipojuca, Brazil.

Local governments are not in a position to make up the difference, said Dr. Jailson de Barros Correia, health secretary for Recife, Pernambuco’s largest city. Brazil’s constitution requires municipalities to spend at least 15 percent of their budget on healthcare, but even before the epidemics hit, municipalities were spending an average of 22 percent. Now that “the tsunami of disease” has hit, he said, it’s “stretching every resource we have.”

Small towns are faring worse. There are days at the public hospital in Goiana, a town of 75,000, when there is no place to sit in the emergency waiting room, so patients crouch on the cracked sidewalk outside.

Lately, there are lots of those days, said social worker Luzenir Ferreira: “Sometimes we take a plastic chair, set it in the hallway, and call it a hospital bed.”

Goiana has delivered an unusually high number of babies with microcephaly. On the last day of Carnival, its maternity ward delivered two in one day. Both families were told to seek out care in Recife, an hour away.

Most babies with microcephaly are finding their way to Recife, because specialists are scarce in rural areas. Three-month-old Joaquim Gabriel’s calendar is booked with doctors’ appointments in the oceanside metropolis, because no care is available in his hometown of Frei Miguelinho. Before he was born, his grandmother, 42-year-old Luciene Terezinha da Cruz, said she traveled to Recife no more than once a year. Since he was born in November, she’s made the trip more than 25 times. 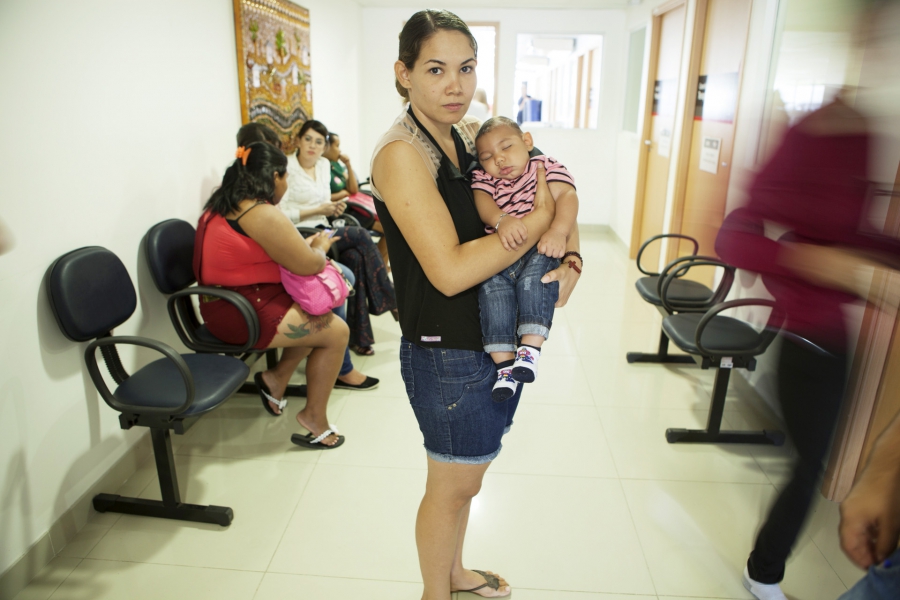 And that’s no small journey, since Frei Miguelinho is three hours away. “The municipality is supposed to give us a car to come to our doctors’ appointments in Recife, but every week it’s a struggle to get the car. I really have to fight for it,” she said.

“One time we got to our appointment at the public hospital and they said they couldn’t see us that day and to come back the next day. I said: 'No, we came all this way. I won’t leave unless you see us.' They were very rude to us, but I know how to be rude too, to get what I need.”

In Ipojuca, it’s not just babies with microcephaly that are sent to Recife for medical care. Nurse Teresa Carvalho said the six-bed maternity ward has sometimes been so crowded that it has served 17 patients, she said. But much of the time — perhaps every one in five days — the ward is closed entirely, because it lacks equipment, medication, beds or doctors.

Carvalho said she wants to be hopeful the situation will improve, but has a list of reasons it might not. “There’s a lack of political will. There’s a lot of money that gets funneled away. There are important positions inside the government that are appointed for favors, not because people have technical capacity to manage things. We’re in a crisis right now and there’s a lot of budget cuts going on,” she said. “I don’t believe it’s going to improve.”

This story was co-reported with PRI's The World. Find more on the Zika outbreak from Frontline here.