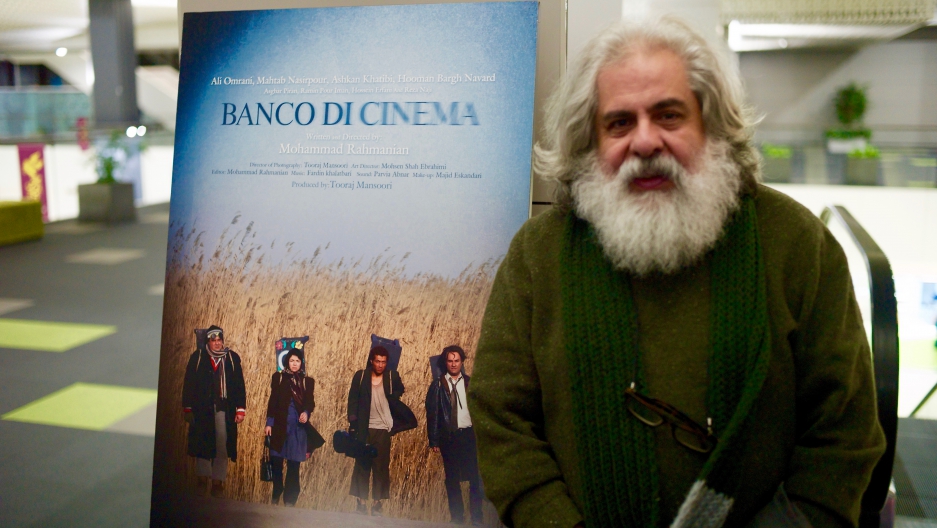 Mohammad Rahamian is a prominent Iranian playwright who's just made his first film inside Iran.

Iranians old enough to recall life in the Islamic Republic during the 1980s will remember that a video tape could land a citizen in trouble.

“My brother and I were detained for having a VHS player, and so were many of my friends,” says Mohammad Rahmanian, a prominent Iranian playwright who remembers those days well.

It took him 20 years to get permission, but Rahmanian has finally made his first film inside Iran. It’s called “Banco di Cinema,” or “bench cinema” in English. I had the pleasure of catching the premiere earlier this month at a glitzy multiplex in downtown Tehran.

“The censors were not necessarily thrilled with this movie,” Rahmanian told me. “They were willing to let me tell a story about Iran in the 1980s, but it’s not clear what will happen down the road with the film.”

Disappointingly for Rahmanian, authorities did not allow “Banco di Cinema” to be shown at this year’s Fajr Film Festival, the biggest film event in the country. But they did greenlight the screening at the multiplex on the night before the 37th anniversary of the Islamic Revolution, when pro-regime crowds would chant, “Death to America!”

“Iran is the land of contrasts. Welcome to the land of contrasts,” says Ali Omrani, who stars in the film. Omrani’s character is jailed for distributing Western movies on videotapes. After he is freed, he roams the Iranian countryside, acting out Hollywood classics for anyone who’ll watch. Omrani deftly recreates scenes from dozens of movies, from “The Good, The Bad and The Ugly,” “The Wizard of Oz,” and “The Godfather."

Omrani has been acting professionally for 40 years. “But this was by far the most difficult role I’ve ever performed,” he said.

Very understandable. Omrani pulls off classic moments from Hitchcock, Chaplin, and Fellini. The film is really a love letter to the golden days of cinema, especially American films.

“We thought that we made a very artistic movie. No entertainments in it. But it seems that they like it,” said co-star Ashgan Khatibi.

He said it come as no surprise to find out that Iranians in general love classic Westerns.

The government censors in Iran who reviewed the film had a couple of problems. They didn’t like one scene in which Khatibi’s character plays the violin bare-chested.

If the film does make it to international film festivals, Khatibi says he hopes people will learn something about Iranian culture from it.

“The thing that we learned in these whole three decades of living in Iran, you learn how to just go day by day, how to live day by day,” he said.

“That was true before the revolution. And it’s true now,” he said.

“And by the way, Iranians love all kinds of American music and art. Whatever issues our governments have, the love between the people is still strong.”