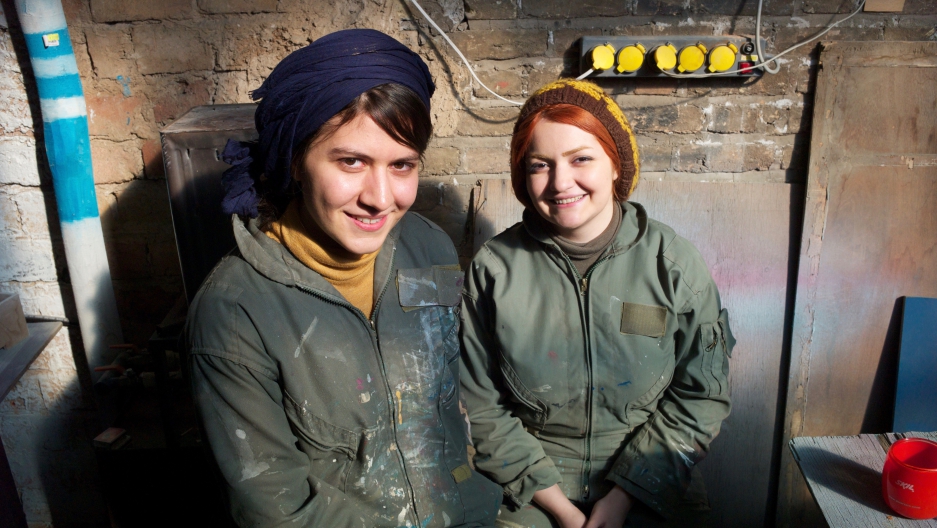 The masterminds behind "Studio_On" of Tehran are Negin Nasiri (left) and Shaghayegh Jahanbani.

Not so long ago, 26-year-old Negin Nasiri longed to get out of Iran. She put together a plan and it came very close to working.

Negin got accepted to a graduate program at California State University, but the US government would not grant her a visa. Her best friend from college, Shaghayegh Jahanbani, was delighted with the news and she didn't contain her joy.

Shaghayegh never wanted to leave Iran, and didn't want Negin to leave either.

Shaghayegh and Negin have long been sisters in design. Thanks in part to that visa-rejection, which they now see as a blessing in disguise, Negin and Shagheyegh are both design and business partners.

They’re finding some success too.

I met them at the little workshop in Tehran where the two women design and build custom furniture.

Their company is called Studio On. They've been in business for a couple of years now. The first steps were baby steps and they were not very encouraging.

“Everything was such a mess. We didn't know anything,” Negin says.

“After six months of working, we had an exhibition. We didn't sell anything. Everyone just come to our exhibition and say, 'Wow, it's beautiful. Bye!’”

Negin says people weren't buying because their work looked so different and unique.

They decided to make that uniqueness their calling card, so they started making custom pieces.

In fact, Negin tells me they had to stop taking new orders through next month, just to keep up with demand.

It's the finish that makes their furniture unique.

When you look at what's available in the furniture stores of Tehran — either affordable and royally ostentatious, or very expensive imported Italian stuff — Negin and Shaghayegh seem to have cornered the funky modern colors and prints market.

They don't talk about their printing process. That's a trade secret, they say with a smile. As for women doing this work, Negin says she and Shaghayegh are known as the real "carpenter girls of Tehran," though she doubts they're the first ever.

They're just living in a different time. Still, they're not like most other young women in Tehran today.

"Perhaps it's Iranian culture. It's not good that you say everything about yourself,” Negin says.

In their green coveralls, Negin and Shaghayegh look more like factory workers than entrepreneurs. But when they start talking about branding and web design, they sound a lot like startup people I've met in Boston or San Francisco.

Not only has it kept these two college friends together. Negin says their business has given her a completely different outlook on life here in Tehran.

“Before I start this work, I hate my city,” Negin says. “The traffic, the pollution, everything was bad. But now, everything is good.”

“It’s our work, just for us. We enjoy it,” Shaghayegh says.