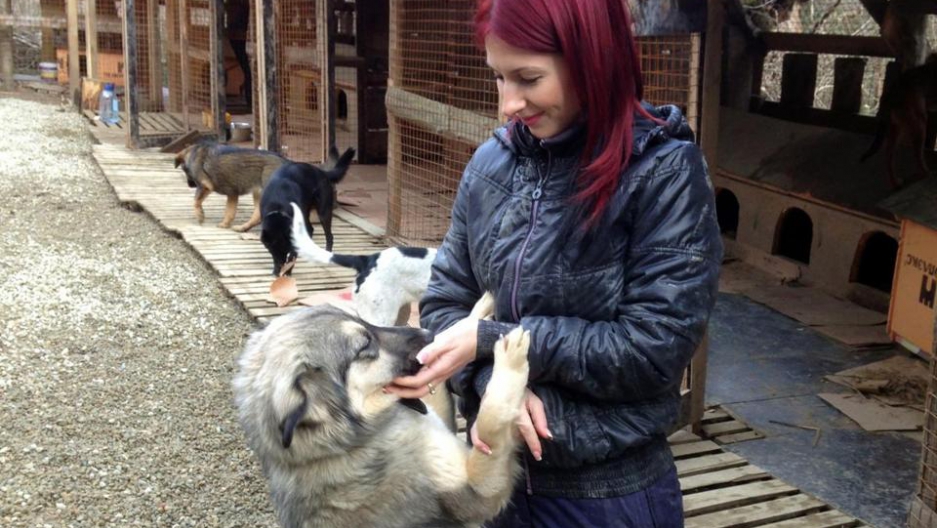 Vlada Provotorova picks up dogs off the street and takes them to her makeshift shelter on the outskirts of Sochi.

The Sochi Olympics are mostly a blur of gold and silver medals, ski jumps and double axels in the rearview mirror these days. But two years ago, in the run-up to the games and with the impending arrival of thousands of visitors, Russian authorities needed to rid the streets of Sochi of stray dogs.

German shepherds mixed with Labradors, chihuahuas and mutts of all kinds. The city reportedly hired a pest control company to shoot or otherwise euthanize the stray dogs.

“Somebody told me that there's this woman named Vlada Provotorova who drives around and who was picking up dogs at the bus station and other places where they’d be in big packs, picking up dogs off the street," says Boston Globe arts and culture reporter David Filipov who travelled to Sochi in 2014 to cover the Winter Games. "She was actually trying to save these dogs.”

Remember Sochi's stray dogs? The Olympics ended,but not the effort to save them https://t.co/6BSBzXpRul @BostonGlobe pic.twitter.com/yGi8QUdxe6

It turned out that Provotorova was caring for Sochi's stray dogs in a makeshift shelter outside the city. When Filipov’s story about Provotorova was published, two Russian American women wanted to help.

They got in touch with the woman and they decided to setup a non-profit, says Filipov. “It's called Sochi Dogs and through that they started arranging for adoptions to people in the US who wanted to adopt dogs.”

The idea of adopting a dog from the other side of the world may seem a bit outlandish. Aren’t there nearby places with stray dogs? Doesn't the US have stray dogs? Filipov says he gets the question all the time.

“It’s true, but when you decide to do something to save somebody, you really have a lot of choices.” The fact that Sochi's strays faced being shot or poisoned by pest control officers makes a compelling case, say dog rescue activists. “[Sochi dogs] are strays because dog owners in Russia very often don't get their dogs neutered or spayed. Dog comes home, has puppies that nobody wants or can afford, and the puppies get discarded. Then they become strays ... so they're brought into this world in this kind of careless way,” says Filipov.

2 yrs after the Winter Olympics, the effort to save #Sochi's stray dogs continues. https://t.co/x61e8O6SwE pic.twitter.com/zgIOzht6ea

That means Provotorova has remained busy. She rescues Sochi’s stray dogs, shelters them and gets them vaccinated and spayed or neutered. So far, with the help of the non-profit, she's arranged 91 dog adoptions, and that in turn has helped pay to have nearly 150 more dogs spayed or neutered.

“It's not like she's rescued thousands and thousands of dogs, but it’s become a thing, and it's ongoing,” says Filipov.

In the US alone, there are more than 50 owners, with 36 more in Canada. One of them is Kelli Stack. She was a forward on the Silver medal-winning US women's hockey team in Sochi.

“There was one time when we were getting on the bus to go to practice — it was, like, a two-minute drive to the rink — and there was a dog just laying on the sidewalk, just, you know, basking in the sunlight, not doing anything," she told Slapshot magazine. "We were petting him and then out of nowhere this white van pulls up, these two Russian men get out and take the dog and put him in the back of the van and drive away.”

The experience in Sochi left a deep impression and later she was inspired to connect with Sochi Dogs and adopt her own. Shayba is a German shepherd mix whose name in Russian means "hockey puck."