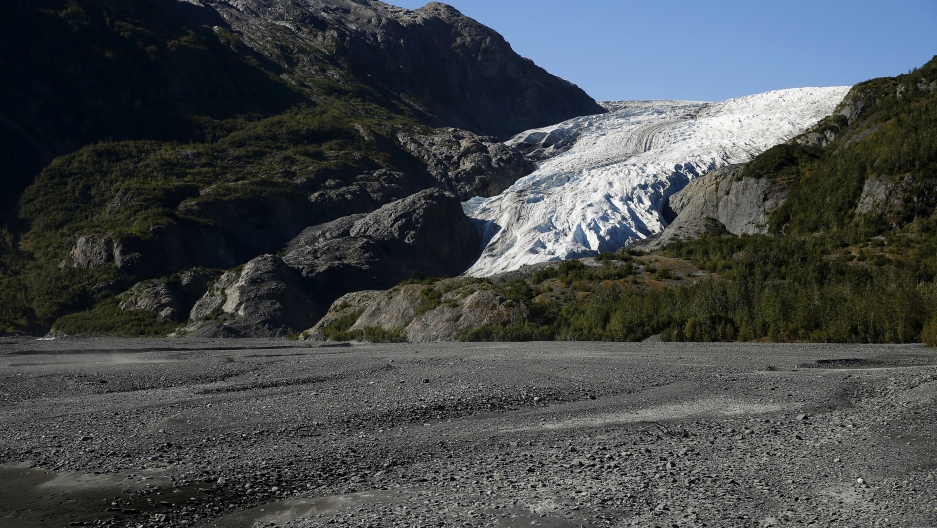 A general view of the Exit Glacier is seen at Kenai Fjords National Park in Seward, Alaska, September 1, 2015. President Barack Obama on Tuesday proposed a faster timetable for buying a new heavy icebreaker for the U.S. Arctic, where quickly melting sea ice has spurred more maritime traffic and the United States has fallen far behind Russian resources.

Suns out. Guns out. You know, as in sleeveless shirts. That might be the next big style in the Arctic.

Because last month, it was warmer than usual up there — a lot warmer.

NASA says January 2016 recorded the "greatest departure from average" of any month on record.

But the spike in temperatures last month was particularly pronounced in the Arctic.

“When we have an El Niño event like we’re currently having that’s just an assist and that kind of pushes you into record breaking territory,” says Gavin Schmidt of NASA's Goddard Institute for Space Studies. “But we would have had a record warm year, even without the El Niño, and temperatures are not going to go back to the 1970s when its finished.”

Does it matter? I mean, it’s up north. And we’re down south.

The warming temperatures are melting ice in the Arctic. That’s changing sea levels in coastal areas. “We’re also seeing changes in circulation patterns,” he adds. “The wind patterns seem to be affected by the reductions in sea ice in the Arctic and that is changing the patterns of storm tracking.”

But making people care about it is tough. It’s thinking in a long-term way. That’s why Schmidt feels like we need a sustainable conversation about it that goes on for years and decades. The Paris Climate talks are a good start. But he says it will take more. “How those pledges to reduce emissions are actually going to be implemented and how they are going to be maintained and perhaps even enhanced ... that still needs to be decided.”

And the hotter the weather, the more pressure it applies for such change to happen.