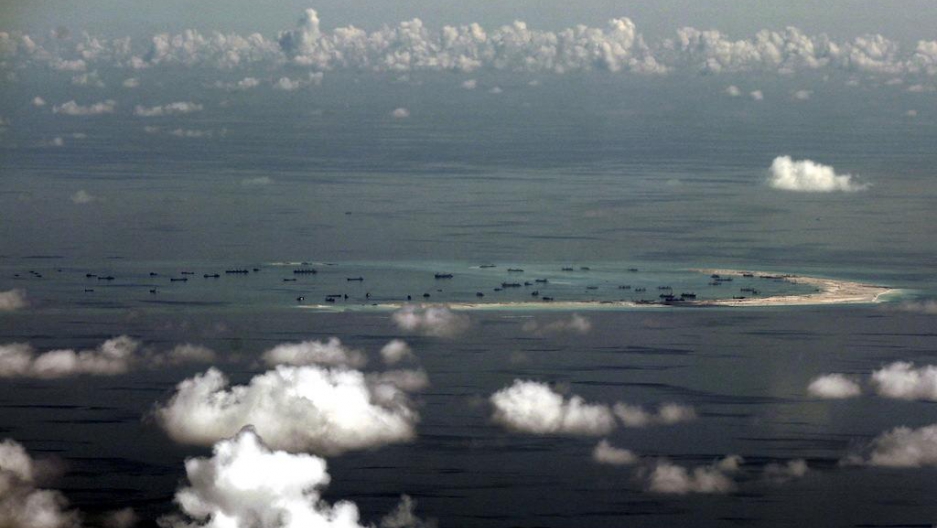 An aerial photo shows alleged land reclamation by China on Mischief Reef in the Spratly Islands, May 2015. China has reportedly deployed missiles on another disputed South China Sea territory, Woody Island in the Paracel chain.

It’s no secret that China despises the pesky US drones and spy planes circling above the South China Sea, seen by Beijing as the nation’s aquatic backyard.

But now the People’s Republic of China can do more than tell American pilots to buzz off. It can more easily blow them right out of the sky.

Sometime last week, according to officials from the US and Taiwan, China appears to have placed surface-to-air missiles right in the middle of the planet’s most contested waters. These HQ-9 missiles, developed by China’s own military, have a range of roughly 125 miles.

Practically any aircraft flying near the missile system is now within China’s sights. That includes a steady flow of drones and surveillance jets operated by the US, which contends that the sea should be an international free-flow zone largely defended by American warships.

The HQ-9 missiles aren’t minor-league weapons. “They’re one of the best pieces of equipment in the Chinese inventory,” says Richard Bitzinger, a defense expert with the S. Rajaratnam School of International Studies in Singapore.

The missiles are parked on Woody Island, a crumb of land peeking above turquoise waters. Centrally placed in the sea, it belongs to a chain of islands claimed by both Vietnam and Taiwan but effectively dominated by China. China is quickly transforming the island into a beacon of power that exerts supremacy over practically the entire sea — a zone contested by Vietnam, the Philippines, Malaysia, Taiwan and others.

Though roughly two-thirds the size of New York City’s Central Park, the isle keeps expanding as Chinese ships dump sand around its perimeter. It’s now home to barracks, radar emplacements and a massive runway that juts awkwardly into the surf.

“Woody Island is being turned into a forward-operating base,” says Bitzinger, who expects the Chinese military to rotate more fighter jets and warships to the island. “They’re trying to turn it into a proper garrison.”

Missiles such as the HQ-9 are the “agile kings on the checkerboard landscape,” according to Peter Goon, co-founder of the think tank Air Power Australia, which analyzes military developments. “They’re principally for killing aircraft.”

“We’re starting to see rapidly changes in the balance of power between China and the West so, really, it was not unexpected that the Chinese would move these capabilities down there,” Goon says. “Historically, they’ve always seen the South China Sea as their front yard.”

Chinese officials have previously told GlobalPost that the sea has been their domain since “ancient times.” Beijing has also proclaimed that the waters are China’s “blue national soil.”

But much of Southeast Asia feels differently. Half the world’s crude oil exports are shipped through these waters. So is trillions of dollars’ worth of global trade. Yet China claims practically all of the sea — even areas off the coasts of Vietnam and the Philippines that are hundreds of miles from the Chinese mainland. The US, forever seeking to thwart China’s dominance, has stepped in as the de facto navy for these lesser powers that are hopelessly outgunned by China. American warships and spy planes have been repeatedly deployed near remote islands claimed by China — all acts that have steadily enraged Beijing.

Media mouthpieces for China’s Communist Party have warned that “if the US wants to teach China a lesson by provoking and humiliating … China will have no choice but to engage.”

Outright conflict between China and the US — two great powers with tightly intertwined economies — is still highly unlikely. But the frustration within China’s military, which sees its dominance of Asian waters as both inevitable and justified, is evident in the voices of radio operators telling US spy planes to go home.

Now that Chinese missiles are aimed at the skies above the South China Sea, the US may have to think harder about conducting flights that infuriate the Chinese.