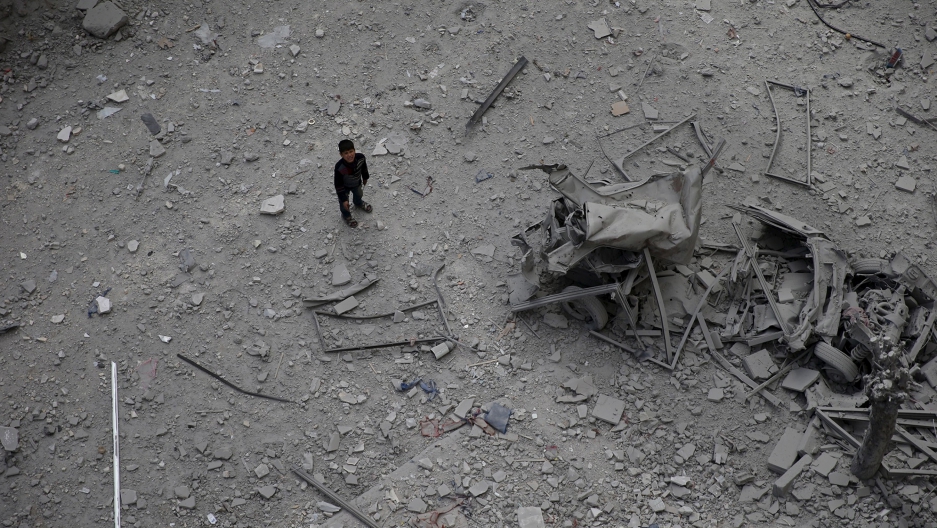 A boy looks up as he inspects the damage after airstrikes by pro-Syrian government forces in the rebel held Douma neighborhood of Damascus, Syria on February 14, 2016.
Credit: Bassam Khabieh
Share

Last week, world powers including the United States and Russia agreed to a "cessation of hostilities" in Syria that would allow humanitarian aid to reach besieged cities and hopefully lead to a more permanent ceasefire.

The bombings underscored just how limited the "cessation of hostilities" deal really is. The Syrian regime and extremist rebel groups weren't involved in the negotiations, so the agreement doesn't apply to the parties at the root of the war: The Islamic State, Jabhat al-Nusra and Syrian President Bashar al-Assad will continue to do whatever they want. The ceasefire was designed to be implemented about a week after the agreement, meaning Russian airstrikes on behalf of the Assad regime could continue. And the US Department of Defense says the agreement won't affect its military campaign against the Islamic State.

It hasn't been confirmed who was responsible for the attacks. The president of MSF France blamed the Maaret al-Numan bombing on forces "loyal to President Bashar al-Assad." The UK-based monitor the Syrian Observatory for Human Rights said Russian planes carried out the attack. Turkish officials also accused Russia of the Azaz strike.

All this raises the question: What exactly is this "cessation of hostilities" supposed to look like? Pope Francis landed in Mexico City on Friday, bringing him to a part of the world where the Vatican has a lot of explaining to do.

Last year, a GlobalPost investigation, "Fugitive Fathers," uncovered a side to the Catholic Church's child sex abuse scandal that Pope Francis might consider addressing on his latest trip to Latin America: The church has allowed priests facing credible sex abuse allegations in the United States and Europe to get a new start by relocating to poor parishes in South America. The Vatican had no comment on the report.

A member of a commission set up by Francis to advise him on child abuse says the group is a “token body” exercising in “smoke and mirrors” that won’t help children stay safe from abusive priests. Meanwhile, new Catholic bishops are still being taught they’re not obliged to report cases of child abuse by priests to the police.

According to Carless, these are just some of the signs that the pope's reform efforts, and his pledge to clean up the Catholic Church’s most damaging crisis, seem to be unraveling before they’ve even really gotten started.

It might sound boring, but one of the hottest topics among central bankers and market watchers right now is the negative interest rate, which happens when a country's central bank charges commercial banks to store cash instead of paying them interest on deposits. The hope is that the charges will encourage commercial banks to stop hoarding money, and instead to lend it out and spur economic growth.

You might be thinking: Wait, this is a thing? Don't worry, you're not alone. Negative interest rates are an unusual financial instrument in central banks' toolkits for managing national economies, but they're becoming all the rage.

Below-zero rates started in 2009 when Sweden’s Riksbank became the first central bank in the world to push interest rates into negative territory. Last week, the Riksbank went even further, lowering its main interest rate to -0.5 percent from -0.35 percent. It's not alone. The European Central Bank, Danish National Bank, Swiss National Bank, and most recently the Bank of Japan have joined the controversial club.

Even the US Federal Reserve, which began raising interest rates in December, isn't ruling out a radical policy reversal.

So why is this happening? In a word: Desperation. GlobalPost's Allison Jackson explains what it all means and what could go wrong.