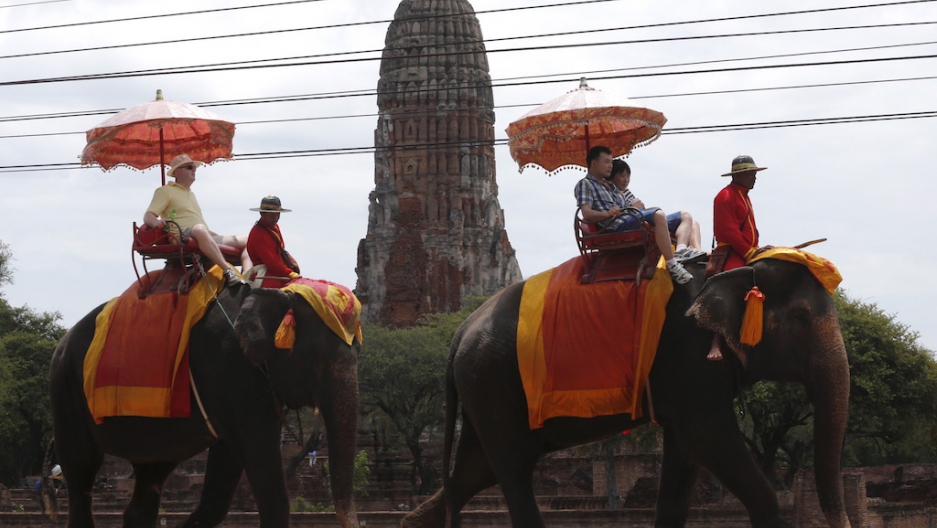 BANGKOK, Thailand — On any given day in Thailand, tourists could be paying to climb atop an elephant that has previously trampled or gored a human being.

That’s not a fact you’ll find in glossy holiday brochures, which showcase travelers blissfully riding pachyderms as they lumber through the jungle. Nor do elephant handlers tend to mention to selfie-snapping tourists if their beasts have a history of violence.

Instead, elephants that kill are often resold to new owners and renamed to obscure their identities, wildlife conservationists say. Then they’re recycled back into the tourist trade so that new handlers can keep collecting cash from visitors — who are often more concerned with Facebook "likes" than animal abuse.

Thailand’s latest killing-by-elephant took place earlier this month on Koh Samui, among the more popular island getaways for Thailand’s nearly 30 million annual tourists. According to most accounts, a 36-year-old Scottish man named Gareth Crowe was thrown from an elephant’s back, gored and trampled to death. His teenage stepdaughter, tossed along with Crowe, was injured.

This killing was well publicized thanks to Crowe’s nationality, which ensured splashy tabloid coverage in the United Kingdom and beyond. But cases in which Thai elephants kill non-Western tourists, locals or low-status migrant handlers are quickly forgotten, says Edwin Wiek, founder of Wildlife Friends Foundation Thailand.

“The chances of a tourist riding an elephant that’s killed before [are] pretty big.”

A review of Thai-language media by GlobalPost reveals a string of at least seven human deaths-by-elephant in Thailand within the last 12 months. All but two of the dead were elephant handlers and, in some cases, they were killed while horrified tourists were still sitting on a hysterical elephant’s back.

“This case was made important because it’s a Scottish guy,” Wiek says, “but if it were a Chinese guy or a guy from India, I think much less [coverage] would’ve happened.”

Unlike dogs that maul toddlers, an elephant isn’t simply euthanized after killing a person. For starters, they’re too revered to be put down casually. And they’re rare: In the last century, poaching and deforestation have halved the world’s Asian elephant population to just 50,000 total.

They’re also wildly expensive. An elephant in Southeast Asia costs as much as a luxury car in the US. Depending on its age and condition, elephants sell for between $30,000 and $60,000 — and many captive elephants are caught up in the misery of the tourist trade. A tourist poses next to an elephant at the 11th King's Cup Elephant Polo Tournament in Hua Hin, south of Bangkok.

“If an elephant has killed only one or two people,” Wiek says, “it’s back to work again after a few months. It goes to a different camp, gets a new name and no one knows. The chances of a tourist riding an elephant that’s killed before [are] pretty big.”

Reports say that the owners of the elephant that killed Crowe plan to give the animal 15 days off work before returning it to service at another one of their trekking camps.

Laundering killer elephants’ identities is abetted by poor regulation. An elephant handler, called a “mahout,” is traditionally a person who has developed a deep bond with the creature over many years.

But the job is increasingly taken on by poor migrants from Myanmar with little experience, Wiek says, and the government doesn’t test mahouts’ skills or issue licenses.

Compounding the danger to tourists is the use of male elephants, which periodically enter an erratic, hyper-hormonal state called “musth.” This condition, which can last weeks to months, causes a gooey, protein-rich substance to ooze from its head — and provokes the elephant to become irate, lashing out at companions and strangers alike.

“An elephant in musth is like a human being on meth,” Wiek says. And yet it’s perfectly legal in Thailand to place a family of tourists on an 8,000-pound bull elephant’s back — even when it is agitated by musth. A baby elephant follows its handler past a store in Udon Thani, Thailand.

Most tourists who cough up roughly $15 to ride an elephant in Thailand encounter no problems. (The same can be said for those who pay to cuddle with 450-pound tigers, another dodgy Thai attraction that results in the occasional mauling.)

But beyond safety, there are ethical considerations that should compel travelers to rethink elephant rides. Elephants don’t instinctively enjoy carrying a heavy wooden bench stacked with human strangers on their spines.

Their subjugation is secured through beatings, stabbings with hooks and tight captivity — a gory process that works best on baby elephants separated from their mothers. Elephants forced to bear tourists on their backs all day are also frequently deprived of rest and water breaks.

That doesn’t mean tourists in Thailand can’t come face-to-face with elephants without complicity in animal torture. Awareness of inhumane practices is steering visitors toward non-abusive elephant centers that care for pachyderms rescued from the tourist trade.

More from GlobalPost: Tourists in Thailand have no idea they shouldn't be doing this