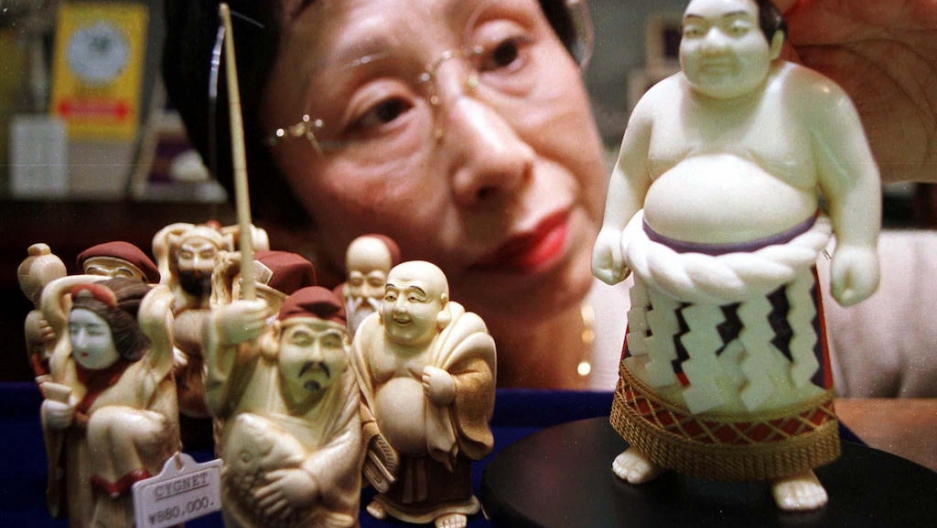 Carved ivory on display in a store in Tokyo.
Share

FUKUOKA, Japan — In Japan, just a few clicks separate you from one of the world’s most restricted substances.

That substance is ivory, the trade in which is almost entirely banned in the United States.

Not so in Japan. Though the country is party to the same treaty that has outlawed commercial imports and exports of ivory throughout most of the world for the past 26 years, here dead elephant tusk is arguably easier to buy than ever.

Head to Japan’s widely used Yahoo Auctions site, for instance, and you’ll find ivory bangles and necklaces listed at starting prices of just 1 yen — less than 1 US cent. Other pieces of jewelry can be bought outright for a little under $9. And there are takers: According to an estimate by UK-based conservationists, more than 12 metric tons of ivory were sold on Yahoo Auctions Japan from 2012-14.

Those numbers are proving embarrassing for Yahoo’s American bosses, who — for the record — do not accept ads for ivory on their US site. Wildlife activists recently targeted the company with an online petition that calls for ivory products to be banned from its Japanese marketplace.

The campaign has collected more than 1.2 million signatures and obliged Yahoo’s American operation to clarify that it does not own Yahoo Japan and cannot decide its policies. (As a minority shareholder, though, Yahoo says it has asked the Japanese venture to “reexamine” its stance on ivory.) 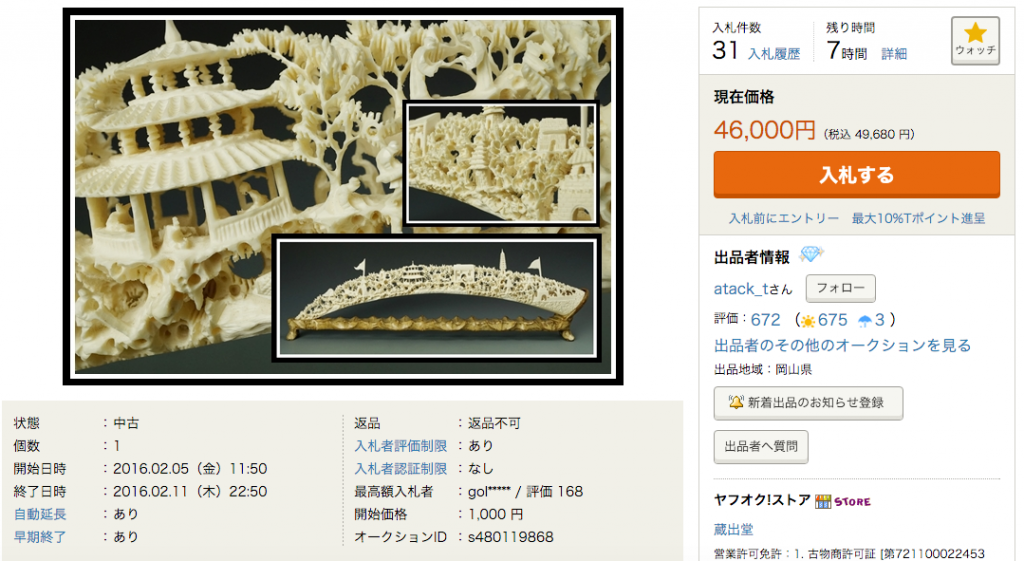 An ivory carving for sale on Yahoo Auctions Japan. At the time of writing, it had 31 bids.

Yahoo Japan isn’t the only site facilitating the ivory trade. A search for “real ivory” on Rakuten Ichiba — Japan’s biggest e-commerce site — likewise returns thousands of results, from "hanko" (the personal stamps used to "sign" documents in Japan) to jewelry, chopsticks, sculptures, pipes and decorative toggles. In 2014 the Environmental Investigative Agency, a British-American conservation NGO, named Rakuten the largest online trader in ivory in the world.

Selling ivory online doesn’t necessarily break any laws. In Japan, as in many US states, it remains legal to sell African elephant ivory that you can prove was imported before a ban on the international ivory trade came into effect in January 1990.

Japan also has an extra stash of “legal” ivory after regulators twice allowed it to buy up stockpiles of African ivory post-ban, in exchange for guarantees that it wouldn’t be re-exported. More than 100 metric tons of ivory have entered the country in this way since 1990.

More from GlobalPost: Time to ban ivory for good?

Legal and illegal ivory can look awfully similar, however, which is why several of the biggest online shopping sites in the US — including Yahoo, Amazon, Google and eBay — have opted to ban the advertising and sale of ivory altogether.

Their Japanese equivalents haven’t taken the same precaution. Nor do they seem to have an effective system for verifying that ivory sales meet the legal requirements. In a 2014 survey of Rakuten, Yahoo Auctions and other websites found using the Yahoo Japan search engine, wildlife trade monitors Traffic found more than 50 businesses selling ivory without having notified the relevant authorities, a mandatory condition of selling ivory in Japan.

Other traders were either ignoring or unaware of restrictions on exporting ivory from Japan, which is illegal without a government permit. According to Traffic, more than 10 percent of sellers on Rakuten and Yahoo Auctions explicitly offered to ship ivory items abroad. An ivory netsuke (toggle) for sale on Rakuten.

Since then, the Japanese government has asked those two websites and others to better monitor online sales of ivory and ensure that they comply with national regulations. But those regulations are easy to flout, claims the Environmental Investigative Agency.

Its undercover investigation of the ivory trade in Japan, conducted last summer, found that 30 out of 37 sellers it approached offered to break laws restricting the sale of whole elephant tusks. The EIA states that Japanese authorities allowed over 5,500 tusks to be registered as legal — and therefore sellable — between 2011 and 2014 without requiring proper proof of where they came from, as mandated under international law.

“Japan is awash with ivory of dubious origin,” according to the EIA, which says that the country’s thriving market helps fuel the poaching that is decimating Africa’s elephant populations.

In other words, the problem doesn’t begin or end with websites selling ivory online. If conservationists’ reports are to be believed, the ease with which ivory can be traded over the internet is one of several loopholes in Japan’s policy — which is not to say, of course, that it wouldn't be better closed.

Will this latest petition do anything to narrow it? Previous attempts by foreign conservationists to dissuade Japan from consuming cute animals have typically met with defiance from Japanese authorities. However, disapproval from overseas shoppers is said to have been a factor in Rakuten’s decision to stop allowing sales of whale and dolphin meat in 2014.

Yahoo Japan has so far said only that it is “strengthening its policies” on ivory, promising to monitor sales 24 hours a day and cancel any found to be illegal. Beyond that, a spokeswoman told the Associated Press, “You can't say there's absolutely no intention to change.”

More from GlobalPost: Islamic clerics declare fatwa on poachers in Indonesia and Malaysia