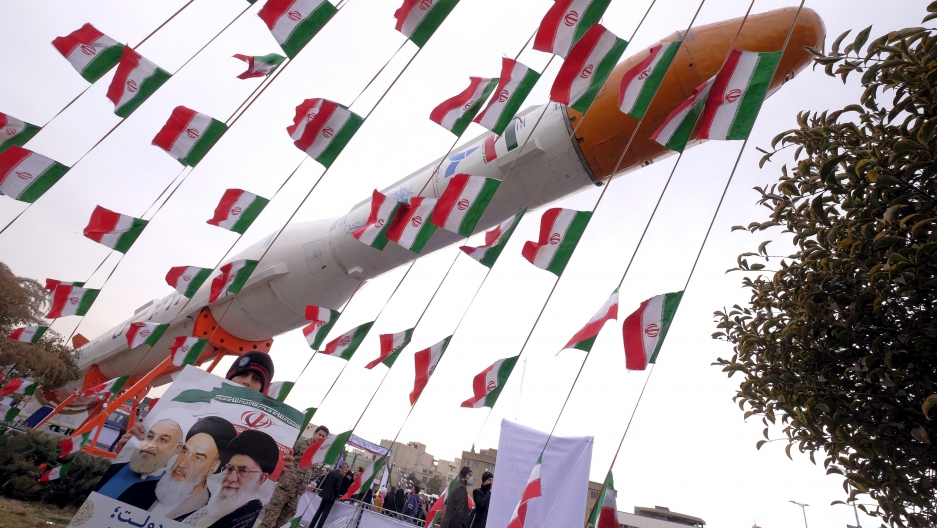 A boy holding a placard poses for camera in front of a model of Simorgh satellite-carrier rocket during a ceremony marking the 37th anniversary of the Islamic Revolution, in Tehran on February 11, 2016.

In the 1970s, Shahram Aghamir lived in Iran. He was a supporter of the revolution. But now he lives in exile.

His story is similar to many Iranians'. And the revolution's 37th anniversary comes to him with mixed emotions.

"For me, I have ambivalent feelings," he says. "It was a popular revolution. And it accomplished political independence vis-a-vis foreign powers. However, when it came to the second component, which has to do with the ability of people to participate in the political process and make decisions for their future, the revolution failed."

That's why the anniversary is a bitter memory for him. Back in the 1970s, Aghamir says there was a lack of political participation by a majority of the society. The Shah ran things the way he saw fit. And many felt the Shah was just a puppet for the US and British governments.

"What you had was this aspiration for change in Iran," he says. "A transformation towards a society in which you had a say."

Aghamir says there was a moment when he felt there was breathing space for such options. He recalls nights of poetry readings in Tehran. He left in 1978, before the official start date of the revolution in 1979.

"Essentially, the Islamists, the regime that came to power, were unleashing a wave of terror against the opposition. It's been difficult for us in the diaspora to go back," he says. "In some ways, we're scared to go back because of fear of persecution."

That fear is due to Iran being a security state. You don't know if you will be persecuted or not. That's what keeps Aghamir in the US, in a self-imposed exile.

Despite the nuclear agreement and the lifting of international sanctions, he plans to avoid Iran for now.

"Political repression in Iran is not going to be eased," he says. "There is no reason to believe it."