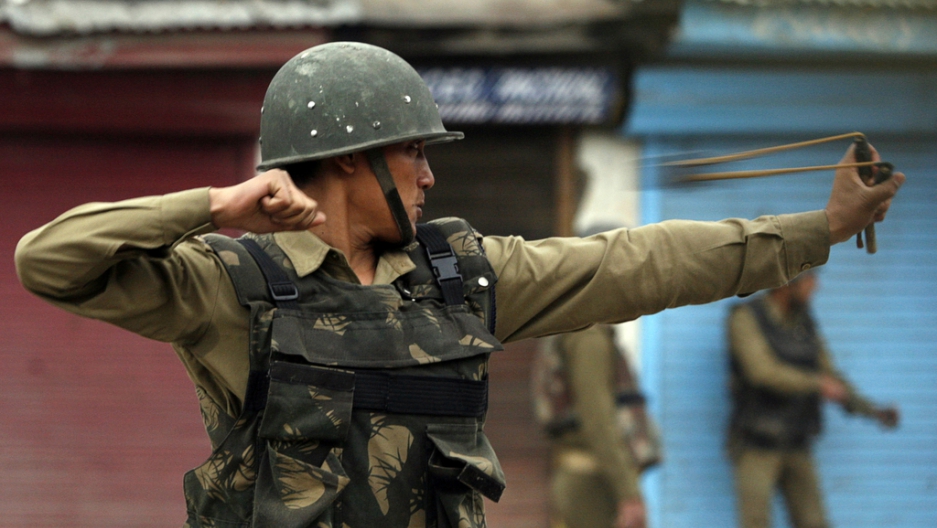 An Indian policeman uses a slingshot to throw stones at Kashmiri protesters during an anti-election protest in Srinagar on May 8, 2009.
Credit: Fayaz Kabli
Share

Police in northern India have gone old-school with their latest weapon to control unruly crowds — the humble slingshot. But instead of firing plastic pellets or paper balls, police in Haryana state are loading them with marbles and chili powder.

Using slingshots to pelt protesters will be a “civilized” way to "avoid any casualty" and maintain law and order, police say. The marbles and chili powder balls will complement the more conventional non-lethal arsenal already available to police that includes tear gas, batons and water cannons.

"Marbles and chili balls won't cause any permanent damage but will pack enough punch to push protesters back," Abhishek Jorwal, chief of police in Jind district, assured the BBC.

(He did not remark on what happens to, say, the human eye when struck by a high-velocity ball of glass.)

Police officers are undergoing special training to fine-tune their slingshot skills, and they've been told “guns and bullets must be the last option” in violent confrontations, Tribune News Service reported.

It’s not the first time that Indian police have resorted to slingshots and other unusual methods of crowd control.

Officers in the Himalayan region of Kashmir have been known to use slingshots during clashes, and last year law enforcement officials in the northern city of Lucknow began using pepper-spraying drones to counter protesters — with “brilliant” success.

“We can spray from different heights to have maximum results.”

While there are concerns the slingshots in Haryana will cause serious injuries, a senior police officer told AFP that only violent protesters would be targeted.

"And it's not like we plan to use marbles on peaceful protesters, it's only meant to control hostile people," Anil Kumar Rao, police inspector general of Hisar district, said.

"We have to step in and take certain action when people are burning government property, cars. This is a very, very positive step — a civilized, cost-effective weapon."

Be assured, then: It's only "certain" actions that will earn you a marble to the skull.