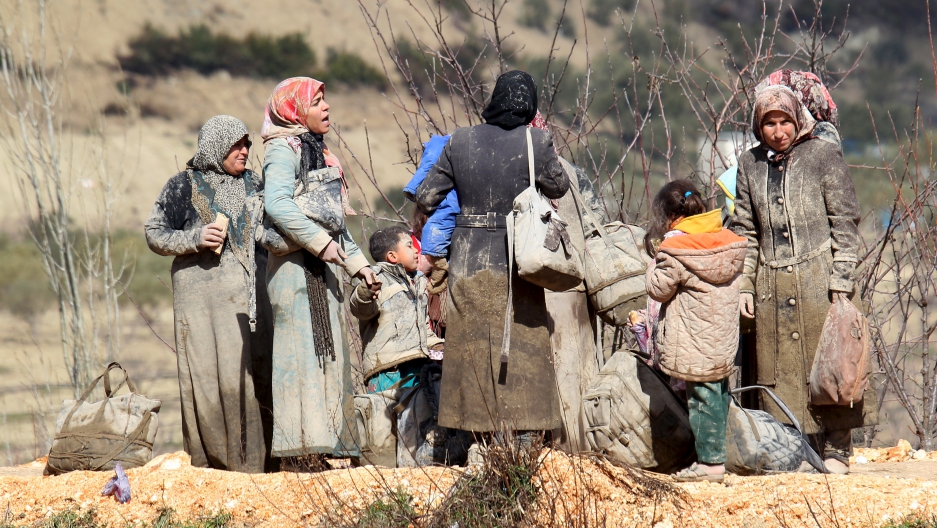 Internally displaced people, wait as they are stuck in the town of Khirbet Al-Joz, in Latakia countryside, waiting to get permission to cross into Turkey near the Syrian-Turkish border, Syria, February 7, 2016.

The US policy in Syria is facing heavy criticism from some old allies as Secretary of State John Kerry heads to Munich for an international conference about conflict in the warring country.

It has long been President Barack Obama’s plan to gradually push Syria’s President Bashar al-Assad out of power through UN-led talks. However, this plan is now in jeopardy after heavy bombing in Aleppo this past week by Syria's own government, aided by Russia, which stands to give Assad more power in the city.

“Turkey wants the United States to come in strong on Syria, stop the Russians and stop the refugee flow that’s pouring out of Aleppo,” says Josh Landis, director of the Center of Middle East Studies at the University of Oklahoma. “Turkey feels like it's been left holding the bag both by the United States and Europe. ... America looks like it’s bowing out. It’s going to let Russia try to clean up Syria or at least have its way in Syria.”

On Wednesday at the announcement of his departure, outgoing French Foreign Minister Laurent Fabius took the opportunity to denounce the US Syria policy, calling it “ambiguous.” Fabius said he doesn’t believe the US is making a strong enough commitment to oust Assad.

Turkish President Recep Tayyip Erdoğan also criticized the US for its ongoing support of the Syrian Kurdish opposition group PYD, also known as the the Democratic Union Party.

“Are you on our side or the side of terrorist ... organizations?” asked Erdoğan at an address to provincial officials in Ankara, Turkey's capital.

Part of the US' strategy to fight ISIS has been to arm Kurdish opposition forces, including the PYD, which has close ties to the PKK, the Kurdish Workers Party. Turkey considers the PKK a terrorist organization with a decades-long insurgency against the Turkish government.

Erdoğan has accused the US of being negligent in its oversight of the arms it provides to the PYD. He says some of those guns have made their way across the border into Turkey and have been used by Kurds in eastern Turkey to commit crimes, including the murders of Turkish policemen and military personnel.

The US rejects his claims.

“They say that they’re watching the border. But they can’t be watching the border. Of course these arms are going to cross borders,” Landis says. “We’ve seen this already. America accuses Turkey of exactly the same thing — of letting jihadists flow across the border whether they’re with al-Nusra, the al-Qaeda branch, or to ISIS. So both sides have been furious at the other for supporting what they call terrorists."

Turkey, a member of NATO, is a key ally to the US. It shares a border with Syria and Iraq, has the 17th largest economy in the world, and in the war against ISIS, it critically provides the main air base in Durleick.

“We need Turkey as an ally. We cannot forsake them. We don’t want to forsake them, but we need to destroy ISIS, and that is our dilemma. And we don’t have good Arab allies to do it,” Landis says.

Turkey is currently dealing with divisive unrest among the Kurdish population in the eastern part of the country.

Landis believes Erdoğan is worried the US will help the Kurds build an independent state along the Turkey-Syria Border, which Erdoğan has said he will not stand for.

“Some 15 to 20 percent of Turks are Kurds and this a real problem for [Erdoğan] in his presidency as time goes on,” Landis says.

But Turkey's biggest concern is the war in Syria and the more than 2.5 million refugees Turkey has taken in as a result. The country continues to receive people, now piling up at the border because Europe has been working to close itself to incoming refugees.

In spite of Russia's support of Assad and his forces, the US still maintains a non-military solution is preferred — and Landis doesn't see that changing anytime soon.

“Turkey is furious because it placed a big bet on backing the rebels," Landis says. "It thought it had America behind it in destroying Assad. It looks today that Assad may reconquer the country and establish his authority. The Kurds then would then have a backer in Syria and a large degree of autonomy, and that would put Turkey in a terrible position.”